Traveling is very exciting, in addition to eliminate fatigue in the head, travel can also add new experiences and insights. Most people prefer to travel to places that serve a natural panorama such as beaches, mountains, and so forth. But not a few also choose to travel to historic places, and that's what I do. Some time ago I took the time to stop by a moment to a historical place in the area of ​​Aceh Besar, precisely in the Village Lampisang, District Peukan Bada. The historic place is Rumah Cut Nyak Dhien. This place is located right on the edge of a causeway that connects the South West road of Aceh with Banda Aceh. Actually from my childhood I often pass this place, maybe hundreds of times. But there is never a chance to stop by just to look around and find out how the history of Rumah Cut Nyak Dien.

Had a shame, as a young Acehnese but not familiar with the history of Aceh heroes who have been fighting for Earth Aceh to the way we feel today. Until one afternoon, I took the time to stop at Rumah Cut Nyak Dhien just to see and take pictures. It has not entered into his house, but by setting foot in the location of Rumah Cut Nyak Dhien is enough to inspire me to find out more who it is Cut Nyak Dhien. Finally my curiosity arises, several times I look for information about Cut Nyak Dhien on the internet. From the results of my search in cyberspace, I just found out that the building we know as Rumah Cut Nyak Dhien today is the result of a replica because the original building had been burned by the Dutch in 1896. This house is used Cut Nyak Dhien to shelter and arrange Strategy of war. This house is also a place for people to shelter when the tsunami hit the coast of Aceh in 2004 ago. 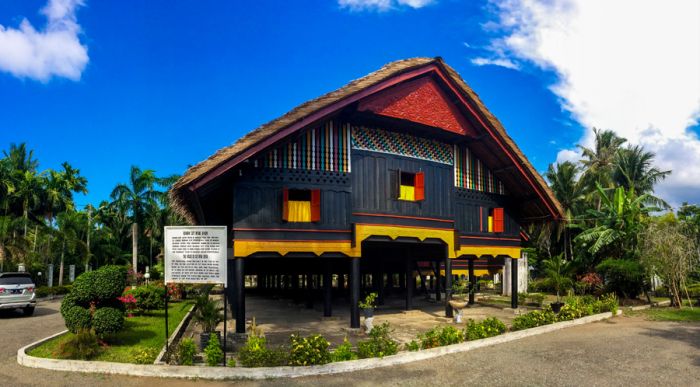 After I read the story of the struggle Cut Nyak Dhien, this is very inspiring me. How he willing to sacrifice his soul even his property to fight to expel the invaders from the Land of Aceh. Cut Nyak Dhien himself was born in 1848 from a noble family. His father was Teuku Nanta Seutia. His personality is made up of both parents and religious teachers so that he has the character of steadfast, steadfast stance, and trustworthiness. Cut Nyak Dhien married Teuku Ibrahim Lamnga in a very young age and they were blessed with a son. Teuku Ibrahim was at the forefront when the Aceh War erupted in 1873 and Cut Nyak Dhien always provided support and encouragement. By the time Teuku Ibrahim was killed on the battlefield, Cut Nyak Dhien was determined to continue the struggle, despite the sadness of loss. In 1880, exactly two years after Teuku Ibrahim's death, Cut Nyak Dhien remarried with Teuku Umar who was also a great freedom fighter.

Together with Cut Nyak Dhien, the opposition led by Teuku Umar was great. But Teuku Umar was killed in fighting in Meulaboh, February 11, 1899. Since the death of Teuku Umar, Cut Nyak Dhien has continued the struggle and managed to organize a massive attack on several Dutch positions for 6 years. He sacrificed all of his possessions for the cost of war. The guerrilla resistance launched by Cut Nyak Dhien was felt by the Dutch to be so disturbing that the Dutch always tried to arrest him. However, the heavy life in the forest and the age that continues to age makes his health start to decline. In addition, the number of troops that continue to decrease due to Dutch attacks. Until finally Pang Laot Ali is none other than the right hand and panglimanya not to the heart see the suffering Cut Nyak Dhien and was forced to betray. He reports Cut Nyak Dhien's hideout with several conditions, including not violence and should respect him. Although in captivity, Cut Nyak Dhien is still in contact with the non-submissive fighters. His actions again made the Dutch angry so that he was eventually discharged to Sumedang, West Java on December 11, 1906. By the Dutch, he was entrusted to the Regent of Sumedang, Prince Aria Suriaatmaja, along with two other prisoners and not at all told who the prisoners were. Prince Aria placed Cut Nyak Dhien at the home of H. Ilyas, a religious figure behind the Great Mosque of Sumedang. His devout behavior of religion and rejection of all Dutch giving generated the respect and sympathy of many people. Finally, Cut Nyak Dhien died on November 6, 1908. He was buried honorably in Mount Puyuh, a burial complex of the Sumedang nobles. Until his death, the people of Sumedang did not know who he was, even until Indonesia became independent. His tomb was identified after a study based on data from the Dutch government