In a disappointing outcome from the hearing that was scheduled at noon today at the Supreme Court of India, the apex court of India has refused to grant a stay on the RBI circular dated 6th April. This means that RBI's mandate to all regulated entities under it will stop rendering services to cryptocurrency exchanges in India and any related businesses. 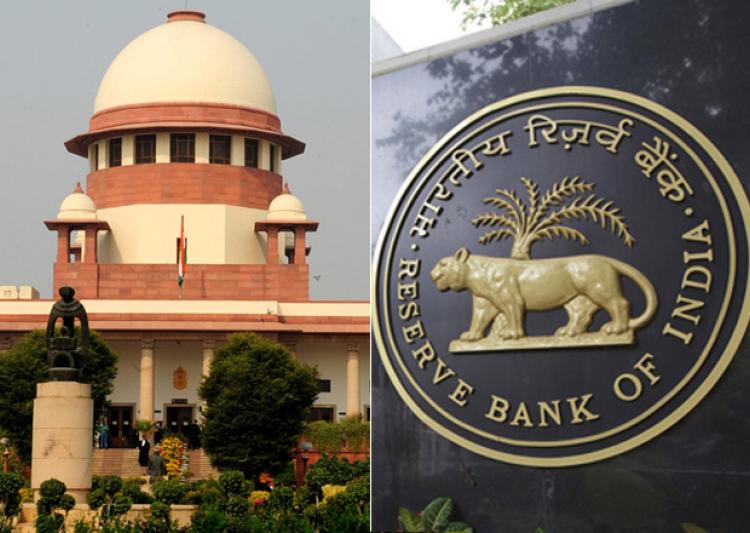 It's rather sad that the apex court has decided to side by the government and central bank and avoid ruling on an unconstitutional mandate prevent legal entities from operating in this country.

This goes to show the ignorance of the apex court on the matters such as cryptocurrencies, decentralization, blockchain technology and the government/RBI muscling their way around.

Next hearing at the Supreme Court is scheduled on the 20th of July. Approximately 14 days after the banking services ban comes into effect on the 5th of July.

CryptoKanoon group and a few new smaller exchanges have shown tremendous courage in taking a stance against the government.

Few days ago in a fresh petition against the RBI’s order dated April 6, disallowing regulated entities from dealing in virtual currencies or offering services to entities dealing with them, the IAMAI (Internet and Mobile Association of India) has moved the Supreme Court (SC) to issue a stay on the order.

The report stated that the IAMAI’s petition was filed in the apex court on Tuesday, according to the SC website. Also, IAMAI president Subho Ray confirmed the filing of the petition but did not want to comment till the matter was scheduled for a hearing.

Major exchanges in India have formed an industry body known as the Digital and Blockchain Foundation of India in order to work with the government and help them understand and regulate cryptocurrencies. However, I seriously doubt their lobbying power given how things have turned out.

Cryptocurrency exchanges such as Unocoin, Zebpay, and Conisecure and many others are part of crypto-exchange body Digital and Blockchain Foundation of India. This industry body was merged with IAMAI in November 2017. Now they have filed the 5th petition on the matter against the court but today's ruling is for all writ petitions including the one from IAMAI.

This is the latest update on the matter. While this isn't the news that we wanted to hear there will be a way forward ultimately. I'll keep us all updated here.

At a time when democracy itself is under severe threat in India, media outlets are being prevented from writing anything negative about the govt, and decision making is severely autocratic, this decision by supreme court comes as no surprise. A technology that is decentralized will always be out of flavour in a govt that is becoming more centralized day by day.

If the judges of Supreme Court feel and say that the court is not being run in a democratic and honest way, then clearly, court will side with the decisions of govt or a govt body on most matters.

The court, rbi, govt and anyone in a powerful and resposible position atm is against cryptocurrencies. There is no media coverage on this or any bitcoin event from around the globe on news channels. Bbc, cnn, bloomberg all cover bitcoin and such things are absent from ndtv, times now or any other proper media outlet.

Pressure is needed from all sides and more importantly awareness. If you look at what kind of YouTube content is out there on cryptos in India, you will be shocked. And if people are investing listening to that, then govt. will act against crypto.

This will be a long drawn case and most likely, india will wake up once adoption has increased manifold in at least g10 economies.

I'll keep on producing contents on steemit and accumulate every tiny rewards thay I get into SP. And one day, when I go abroad for Job or something, I'll cash out everything in there! I know all that I say now is irreversible since it is blockchain and they can catch me if they make cryptocurrencies illegal. Yet, I don't want to become the slave of a government which doesn't even allow me to eat the food I like the most. I'm glad I'm living in Kerala where I can atleast eat beef without having to fear the government!

I do like this your write up. And do admire your closing remarks that they must be a way forward. Government agencies trying to stop a disruptive innovation like crytocurrency is an exercise in futility. It is more like trying to stop a flowing ocean.

Looks like these petitions are not working for the block heads of Indian government and the funny fact is that our prime minister keep Traveling different different countries but still didn't understand the true power of Blockchain because it's maybe remove a big part of poverty from india.

I hope for some positive outcome! It'll be great for Indian users on steemit.

No luck for now. Exchanges won't have an operational bank account from the 5th July onwards as per current mandate from RBI. If petitioners win maybe then. Unlikely without the regulatory committee coming out with framework in favour of cryptos and that being passed as a bill. But my fingers are crossed. Let's hope it works in our favour.

@firepower court is taking time to do something good for us, however i don’t hope much.

@firepower , i noticed that manny users doesnt understand the concept of steem witness so i made a post to help users understand , check it out , you can resteem if u feel like its usefull for users , please curate to encourage the hardwork.....
https://steemit.com/steemgigs/@blackempror/a-fully-comprehensive-user-guide-on-who-is-a-witness-and-how-to-vote-your-witness

While it's still a little beyond my understanding, I am grateful to have through you a peek into the crypto world in India and its interactions with the people and economy.

I don't quite understand what you are explaining here, but it sounds super frustrating. I hope things turn around in relation to cryptos over there in a way that is freeing for so many!

Hi Kay! Basically the central bank of India has banned any bank regulated by it to provide banking services to crypto-exchanges in India. This means we cannot buy or sell via Indian exchanges anymore to convert crypto into Rupees and vice versa. Banks can render services until 5th of July and then these exchanges won't have a working bank a/c anymore as per the current mandate. Supreme court has refused to stop this mandate from going into effect from 5th July for now.

Oh, wow. That really is terrible news. Wish I had more to say.. but.. just awful for all of our Indian friends here and beyond! I hope it can turn around in time.

we don't understand that in one hand our government is promoting Digital India and in other hand government is against digitization. Because RBI didn't release circular without government instruction . Government is behind RBI

Blockchain blocked...another shock to the indian users....either the government is blank to listen about blockchain or blockchain is black enough that govt is not able to see the future....hopfully the future is secure else its better to powerdown from steemit

Yeah! My assumption was approximately perfect, I had commented 11 days ago that High court will extend the time but here Supreme court has done it. In 11 days ago in your post : Court has declined stay on RBI's circular. No more deposits/withdrawal from exchanges from 5th July.

But hearing date will be between 13 to 20 July 2018 and from 5 to 13 court will read the people reaction then court will announce final order.

If India is not welcoming of cryptocurrencies, other countries will be. And India will fall behind.

This is a bit pessimistic news but I hope we will soon be hearing good news from India and across the world.

This information is helpful for me.though it is sad that ban remains.when it can be unban again!

This Is Just disappointing!
Who knows if the judge is even among the entities

This surely isn't what we all expected to hear. I really hope for some good news to come!

A Disappointment for the crypto lovers. But new technologies are coming to the market and chances are still there, hope for the best.

I don't think a government that did demonetization will be that accommodating towards crypto. For this government any money is villain. during the crisis of jobs, crude price and hyper inflation, crypto currencies were a hope for saving for retirement.

This is so sad. all renstrictions are. ppl should invest in cryptos if they want. regulation or restrictions always privilege a few

Oh, this is a sad news. Let us wait and see what happens next.

The ban comes to effect from June 5 , that means should I exchange all my cryptos to fiat or there will be a possible workaround after that ?

Possibly India will not be the only country that tries to stop the advance of cryptocurrencies. I think that in all countries the new technologies are breaking old paradigms that considerably affect the interests of the great monopolies of history. It is a struggle that will end up winning the new technologies.

What is this shit going on. Unbelievable. Why they are doing so? Hope to get some postive results which will be in favor of all crypto investors.....

thanks for nice information! Reserve Bank of India

bro did we have any other option

Thanks for sharing. I've smashed the upvote button for you! Large governments need to adopt it rather than punish new tech.

Also, if you are looking to get some tokens without investing or mining check out Crowdholding (https://www.crowdholding.com). They are a co-creation platform were you get rewarded for giving feedback to crypto startups on the platform. You can earn Crowdholding's token as well as DeepOnion, ITT, Smartcash and many other ERC-20 tokens.