The Next Big Global Collapse and What I See Coming -- TLDR Overview With Charts. | Globalist Hegalian Dialect.

barrydutton (74)in #informationwar • 2 years ago (edited) Here is what I think and I know many of you in crypto and paying attention may feel similar.... so this will mean more.

1/ The last ~12 mths all the talk about the scummy big bankers getting into crypto -- JPMorgan's Jamie Dimon calling out BTC as a scam and then retracting that was a smokescreen.

b/ During the last whole 36 months -- look at all the countries stacking gold --- and at the same time moving off the USD standard period, something else I told people about and to watch. Not enough eyes on that angle.

Here is just the China charts on their gold accumulation.... never mind similar charts for Russia, India, and others vacating the USD... 2/ ~6 mths later -- news breaks about some of the big banks getting into the crypto game for real -- they do.

3/ The next ~12 mths shows JP Morgan Coin as official finally --- and literally around the same time -- all the chatter and Fedbook Coin coming. -- in the same month or so -- not just a happenstance. And that was round #2 of the Fascistbook Coin the last couple years - it was not the first time mass rumours and speculation had come into the market for that. 4/ The new world reserve currency - the SDR has long been on the books of the globalists --- quietly it has been pushed aside and buried in newsfeeds and waiting in the wings quietly. ( The SDR is an international reserve asset, created by the IMF in 1969 to supplement its member countries' official reserves. ... The value of the SDR is based on a basket of five currencies—the U.S. dollar, the euro, the Chinese renminbi, the Japanese yen, and the British pound sterling -- the symbol for that seems to be $XDR and is alongside or tied to a similar product - the $ACC coin... details are still mixed on these things. )

5/ The markets will cave in on themselves worldwide -- ie look at Venezuela in the news daily, along with the huge losses in the stock markets and the inverted bond yield curves and all the credit defaults on loans /credit cards/mortgages as all the charts and correlated assets get ready to dump -- the pressure cannot be sustained much longer by QE / printing money. 6/ Markets collapse, JPMorgan Coin and the SDR/ACC coins to the rescue along with a couple other things --- voila ---They are here to save us once again.... aka the new Jekyll Island agreements. That's what is happening. That's how I see it going down, give or take. 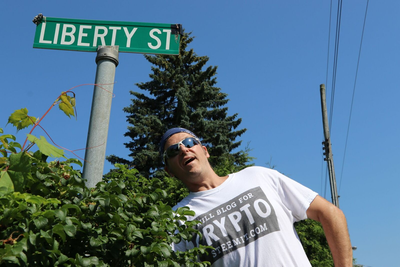 Here is the video that was done on my blog post here:

My reply to the Stacking Nerd today on the video that Salivate Metals did on this post.

Central Banks and their kind have caused some of the most damage to humanity and liberty as is well known. Their standards suit them -- not Liberty.

There is a lot of garbage on the market like you say also -- the longest crypto bear market became official a few weeks ago statistically. Many of these bad projects during the 2017 crazy run up.... are wiped out and gone, which is good news. The really solid projects with good fundamentals are honestly building and building every week.

The problem with standards is that few hold the power on those things and it kills the Free Market principles.

You hold your private keys in your hands, to your private wallet and nobody can take those from you, unless you are hacked. I know what you are saying though.

Here is the video that was done on my blog post here:

Well done Brother! In addition, I notice that the Rothschilds are dumping securities assets as fast as they can and putting their money into gold! Something's up and PM's will be the thing to have in the near future!

My friend, thanks for taking some time to comment, I value your opintion.

This article was featured today in this 12 mins. video also in the #silver / #Gold community on Sal's YT channel:

If a collapse happens people are going to go to what they know to be stable... PM's. I hoped that cryptos would be more widely accepted by now. The big decline of 2018 soured people's enthusiasm... that's not to say that cryptos won't be viable, but not as big as I had hoped. Like I said a lot of the small alts will disappear.

Thank's for share. I am curios, will bitcoin price reach 6000$ this August and what the reason? What your oppinion?

I really don't get into price predictions. That's all most people care about -- there is a lot of other factors and things to go into all this and be concerned with.

Smart... I've cut my cryptos to two holdings EOS and BNB... both are solid with good business plans to carry them into the future while other alts are scrambling for crumbs.

Interesting but since I know you -- not surprising.

Have a nice week Rich, feel better my brother.

Ever since they announced their plan for a decentralized exchange back in 2017.

Gold and silver have been currency / money for centuries.

They have a lot of industrial uses as you may know -- if not look those uses up, you will understand a lot more about that aspect then.

JPMorgan is one of the corrupt massive big banks -- they introduced their own "cryptocurrency" so to speak recently after well over a year of speculation (no pun intended) -- being one of the corrupt big banks in the USSA, the land of the fee and home of the slave -- you can bet it is not going to benefit YOU -- the average every day person.

JPM also has been caught (finally) manipulating the prices of the precious metals - one of many we know has been doing it for decades.

They also hold the largest physical position of gold in the world, even though some of that is custodial in nature (holding it for others, banks, investment funds etc) -- and they have been shorting it for a long time -- meaning hoping the price would go down -- then they buy more.