blockdeals (59)in #introduceyourself • 4 years ago 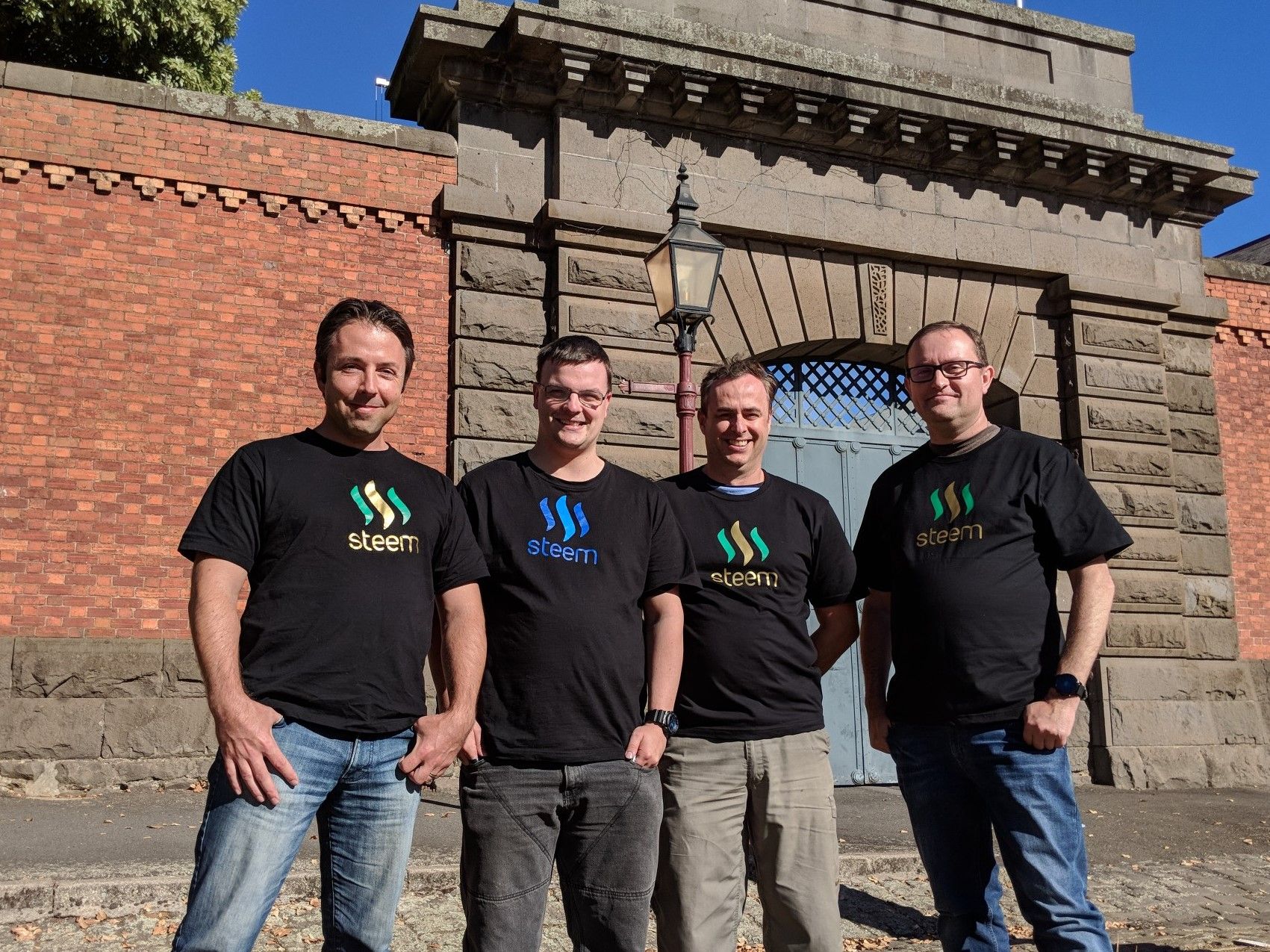 It's been a few days since we launched BlockDeals.org and we've been really humbled by all the community support so far. Some Steemians have even posted their first deals. Woohoo!

However, we neglected to take the time to fully introduce ourselves so here's a little more information about the Block Deals Team.

We are four Aussies, who see huge value in the Steem Blockchain and wanted to contribute to the bigger picture rather than just contributing via the Steemit platform.

In the photo you'll find [left to right] @mazzle, @dealsy, @just2random and @scottweston and this photo was taken in front of an old Goal in Ballarat, Victoria which is home to a local hacker-space.

As you can see we looked pretty happy with ourselves, but that's not because of the launch but rather we figured out how to take this photo without a tripod. (Of course, we could have asked a passing pedestrian to take one for us but it seemed very un-hacker like at the time)

In the photo we're wearing the lastest T-shirt designs from the @steemitshopaus which is owned and operated by @mazzle while @just2random is developing the steemaustralia.com website with local Steem content.

Yes, we are a resourceful group and have a variety of skills which complement each other nicely. Essentially, @scottweston and @dealsy are working on the back end while @mazzle and @just2random focus on community engagement and promotions.

If you want to know more about each member of the team be sure to check out their personal profiles on Steemit.com

And rather than fork existing code, we've decided to write the code from scratch to ensure we can serve the millions of views we expect to receive once we begin actively promoting this website.

Yes, it's going to be BIG and scalability has always been our number one focus.

But this project won't work without sponsorship as we are all relatively new to the Steem Blockchain and don't have the required SP to upvote people contributing to the community.

So if you see value in this project please don't hesitate to delegate a little SP our way so we can ensure the Block Deals community is rewarded for their efforts.

Wow! That's special and won't be forgotten any time soon.

It's these selfless acts of kindness that will always remind of us what Steem can be and the sort of community we want to grow within Block Deals.

If you'd like to contribute to the Block Deals project please consider making a small SP delegation donation via the links below.

And be sure to 'follow us' to keep informed of the new feature releases as we work towards a full beta release and unleashing Block Deals on the world.

Thanks for the shoutout - I figure the 50SP is doing more good with blockdeals than it would be with my blog posts.

It's really cool to see a team australia initiative like this - and I like that it goes beyond social media and into a very specific target market.

and need to learn more about this project, but it seems super interesting. Thanks for sharing, now that I know about it I can look more in detail.

Thanks @chasedollars. We look forward to seeing you post some deals. :)

Can you please talk about this project? Is Block Deals aiming to be like Bittrex? Is it aiming to be a cryptocurrency exchange application build on top of the STEEM blockchain like other applications are connected to Steem, like http://d.tube for example and also http://steemit.com and also http://busy.org or what is Block Deals? Thank. Thanks for sharing, hehe. I'm Oatmeal Joey Arnold. You can call me Joey.

Blockdeals, is a whole separate site. The idea is people will find bargains around the web and post them onto the site for others to buy. Much like ozbargin.com.au. However, now with Steem users can be rewarded for finding good deals!

We wanted to show that the Steem blockchain can be used for lots of applications and not just for socail media :)

Is it competing with Ebay and Amazon and Alababa?

Not at all. It's competing with the likes of slickdeals.net and ozbargains.com.au.

Block Deals is a site for listing great deals that you encounter throughout your day rather than for selling products directly. The difference with our site is that our users are actually rewarded for submitting their deals unlike the competitors. :)

Block Deals sounds to be more general, but could also maybe include great deals that they were also selling as well instead of just deals they encounter.

Hey look, it's @joeyarnoldvn's FIRST non-spam post! Let's all give him a round of applause!

You can also check out our first post which gives more in-depth information about the site and what we aim to achieve: https://steemit.com/steem/@blockdeals/introducing-blockdeals-org-a-community-platform-for-bargain-hunters-and-deal-spotters

Hello! I followed you, let's increase the power of Steemit together! I hope you follow me. I'm always glad to have a new acquaintance with good people! ;)