I posted the following chart back in October, where I labeled the rise in bitcoin dominance as a dead cat bounce. So far, so good. I will consider this forecast correct if bitcoin breaches the June 20th low of 37.11%.

Bitcoin has since dropped from around 58% dominance to about 45% dominance:

Bitcoin Cash has made significant inroads against bitcoin over the past few days as Coinbase added support for the bitcoin fork.

However, I am still a believer that Ethereum has the best long-term potential, although the final product is still mostly vaporware at this point – casper, sharding, raiden, privacy, ect. 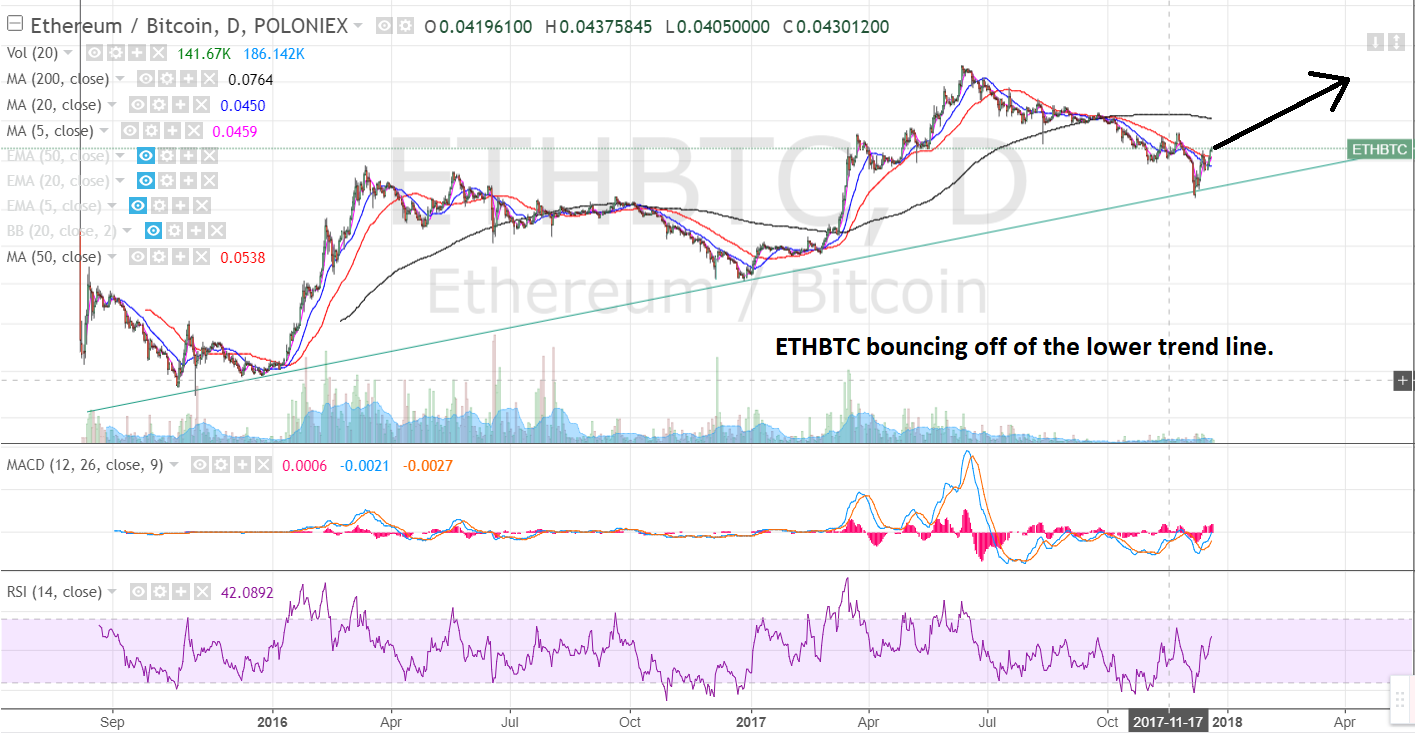 As the entire crypto market pushes towards the $1 trillion level, we can see that both fundamentally and technically this is all lining up for a bear market/consolidation phase that should last a couple years, during the course of which, bitcoin should be superseded as the dominant cryptocurrency in terms of market cap. Time will tell.

Good analysis and conclusions.
Supremacy of Bitcoin is concerned if the BTC community doesn't react accordingly... will see

Hi there =)
I like your analysis. Clean and simple
One question for you : Are you not afraid of EOS released platform in Juin 2018 to put a great pressure to Ethereum ?
I love ETH and it will keep growing, Until EOS I think

I wrote an entire post on this a while back. Check it out.

2 of my favourite people discussing and agreeing with me ! Oh well Life is Good.
Take care!

Héhé ! I was margin called went from let's say 100 to 20, bought like crazy and now at 150 and counting ahah.
I do not care anymore about risks, all my initial money is out ! :D

your post is very interesting, I like your post, because it can add insight to me, hopefully in the future can provide better postings, so I can know many things in my life, thank you very much. and also hopefully useful for other stemit friends.

If the swappening does happen, I can't think of a less desirable coin than ETH to take BTC's place. OK, I can think of lots of blockchain 1.0 coins that are less desireable. ETH is like blockchain 1.5. They don't have scaling solutions in place. Cryptokitties paralyzed the network for god's sake. I won't trade in it long.

If it does happen, ETH will not reign for long. It ultimately means truly usable coins like NEM, BTS, and soon EOS and ADA will win. Personally, I don't see this market becoming rational for a long time still.

Cryptokitties clogging up the network has nothing to do with long term potential. If sharding works, it will provide orders of magnitude more scalability without sacrificing decentralization.

What coins offer 400k transactions per second now in production without sacrificing decentralization? Eventually, several chains will be capable of it, but they had better not trade too much security for performance.

BTS can pull 100,000 tps now without optimization (X6666 of ETH's max). EOS should to 400,000+ tps by release this summer. I'm seeing that decentralization is a debatable term, so not going to make an argument for BTS or EOS regarding that (though I believe NEM/XEM is). Though ETH's development is decentralized, their mining is not.

If you consider ETH development centralized, then all development is centralized. As you alluded, centralization vs decentralization is subjective. The end goal is security, so I think the FUTURE POTENTIAL of each system is sound. It remains to be seen which chains become dominant over time. ETH will eventually most likely rival the throughput of BTS or EOS, with perhaps higher levels of security because of casper.

Fair enough. I said DEcentralized for development of ETH FYI.

Good to see that your prediction is working.
Bitcoin is the equivalent of the Nokia 3310 for mobile. One of the best phone but soon to be outpaced by other Cryptos faster, cheaper and more efficicent (Smartphones ! :D).

I was not a member on steemit back in october, but was interesting to ready your post now. Yes, it is a fever out there for Bitcoin, and I strongly believe this is just the beginning of it. The market cap can dictate and mark a line for investors and not only. Gaining people's trust is hard, but BTC has already gained trust and brought big investor recently. Thanks for sharing you thoughts about it, keep us posted!

I share your viewpoint that Bitcoin is not the most useful coin. However, most people i think are using it as their store of value rather than want can be done with it. Etherium has many more uses and will be used in many more applications. Just not sure if thats enough to sway perception and move people to hold etherium and not Bitcoin. Please keep sharing your views.

Ultimately, i think the coin that wins will be the coin that powers a system that can be used widely for all things financial. It remains to be seen which system will provide the necessary security AND usability, if any at all. Many coins are competing for this opportunity right now. Only a select few or, likely, only one will capture a majority of the market share.

damn, your prediction is on point. need to follow you to know the future... what do you think is the best coin to bet on right now? and your thoughts on XVG, IOTA plz :)

I own a bit of IOTA because it is a much different way of managing a money supply other than a blockchain. Perhaps it will overcome all the supposed flaws. I haven't looked into XVG.

How are you brother, I wish you a happy day, a wonderful publication, my greetings to you