How to Teach Yourself Japanese: Words, Sentences, Grammar, and Pronunciation / Part 3 of 5 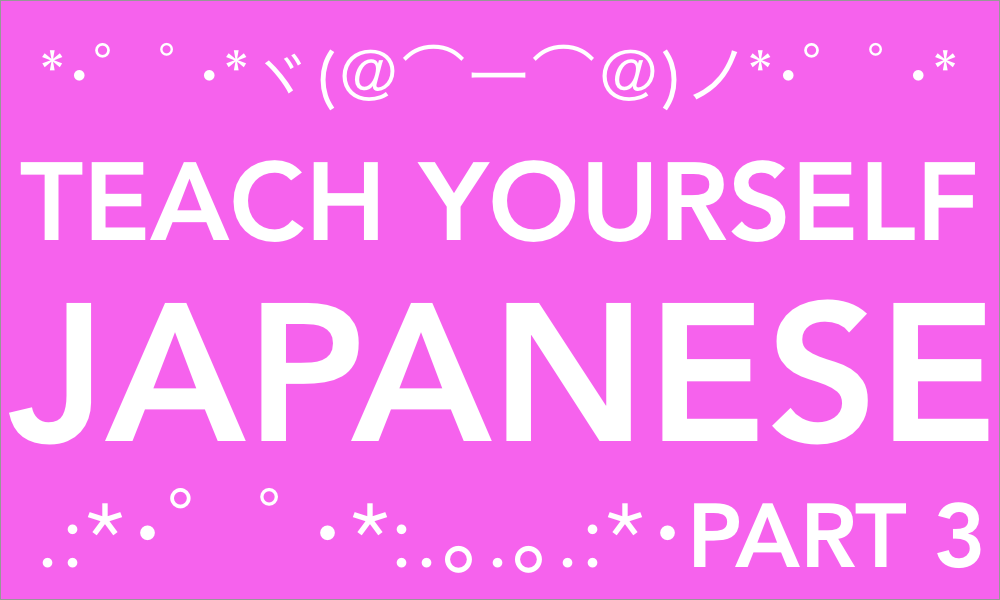 Now that we’ve started learning how to read Japanese, let’s take a look at some words, sentences, and grammar. We’ll start learning some Japanese words and sentences with a free online textbook called Tae Kim’s Guide to Japanese Grammar. It’s the only grammar resource I used in depth and it’s amazing that it’s free.

We’re not going to go through this like you might in school. Our goal is just to get some exposure to the structure of the language along with some simple sentences and vocabulary.

I’ll explain this through an example with one lesson from the beginning of the textbook. We already learned the kana in the previous lesson, so we can skip to this lesson on state-of-being. Read through it starting from the top, and when you get to example sentences, open up Anki and create cards for each one with this format: 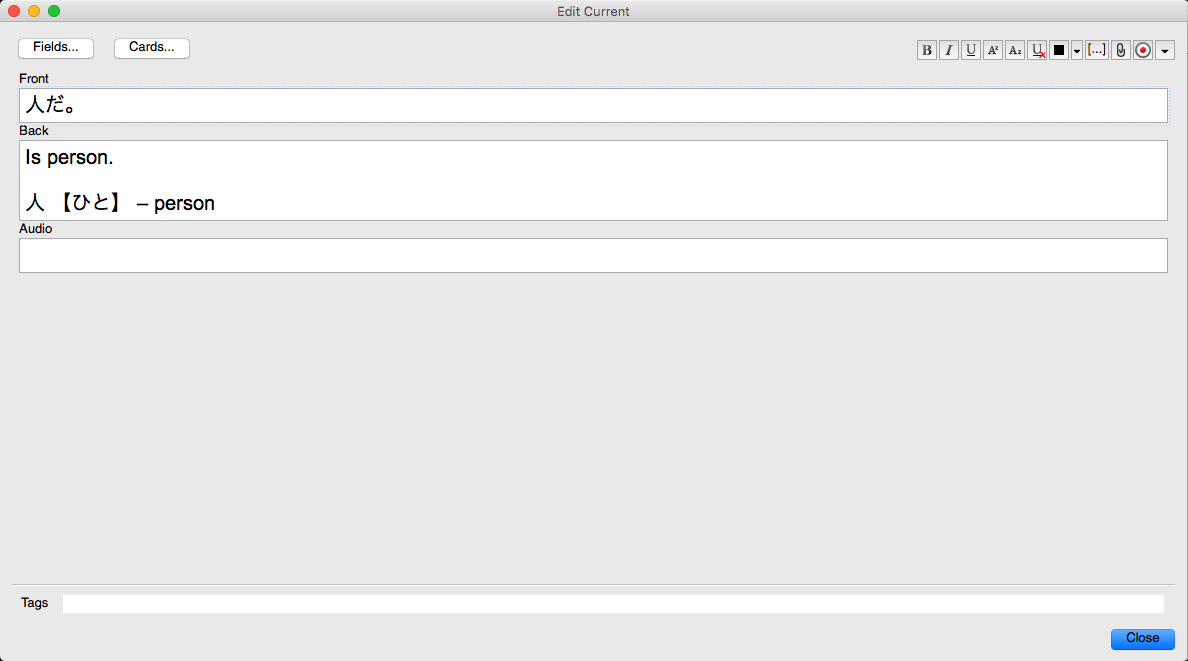 On the front we put the example from Tae Kim.

And on the back we put the English translation and definition for the new word. The definition also contains the reading (we read the word 人 as ひと). 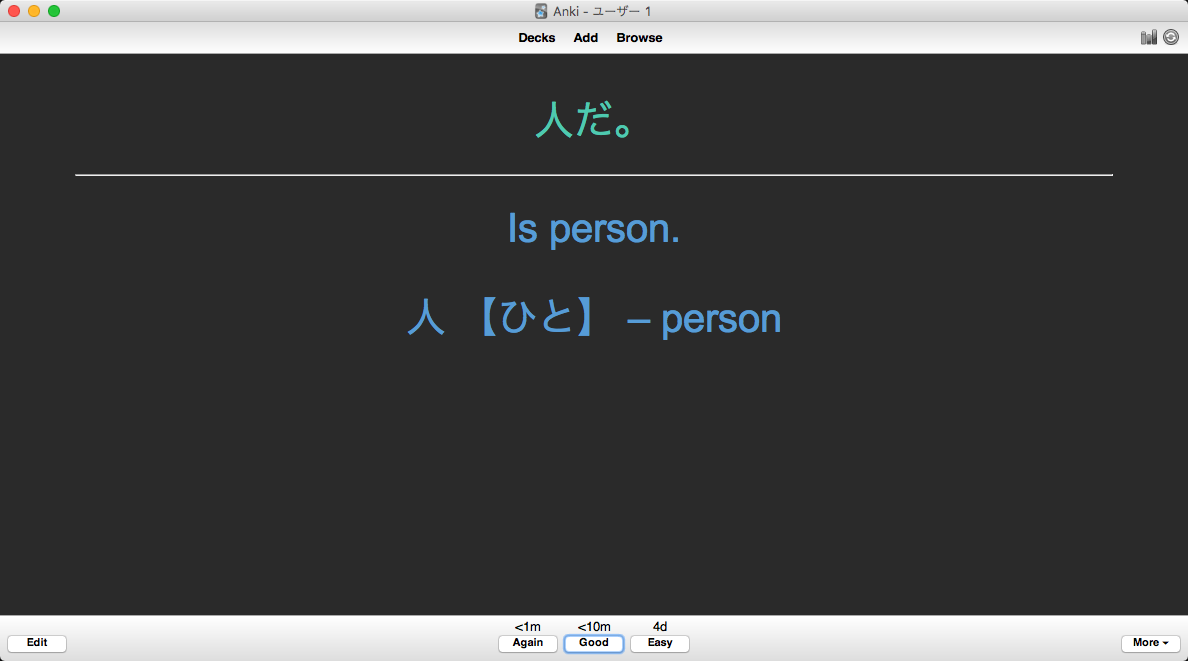 You can also make some notes about the grammar points to help you understand the sentence. Over time the goal will be to remove the full translation for the sentence in English (“Is person.”) and only put the definition for the new word.

e only want to review in this direction — have Anki show you the Japanese first, try to recall what it means, and then check the English to see if you’re correct.

Note: If you’d like to change the styling of your deck to look like mine, hit the cards button in the screen where you add new cards, and then add the following code into the three corresponding fields: A really important thing throughout this process is to try to add sentences that only contain one small piece of information that you don’t know. For example, only have one new word in a sentence. This might be more difficult in the beginning when everything is new, but trying to follow this rule as much as possible will make your reviews in Anki more productive.

Having a card with too much new information will make it harder to remember. If it’s only a small gap of information that you’re trying to fill, the rest of your knowledge will help give that new thing more context to hold on to and therefore make it easier to remember.

As an English speaker, pronunciation actually won’t be as difficult as you would expect with Japanese. There are some completely new sounds (such as the sound for “r”), but they will come in time.

Your ability to hear sounds as they really are in Japanese is what will limit your ability to produce them. You might feel like you’re saying something the right way, but over time you’ll pick up on more nuances in the language, which will allow you to adjust your pronunciation to sound more natural.

It’s a long and continuous process — don’t be discouraged if you’re having trouble with it. Most Japanese speakers will still be able to understand you even if you don’t have a perfect accent. In my experience they’ll just be appreciative that someone who is not a native speaker is making an effort.

To help us in this process of learning to pronounce Japanese words properly, we’ll need a lot of exposure to spoken Japanese. There are a few options here. I think it makes sense to start small in the beginning to avoid getting overwhelmed, so we’ll focus on the audio of words and sentences that we are learning in Anki.

A good free option is to get audio for the new words as you learn them. There is an amazing site called Forvo with free audio recordings from native speakers in a ton of different languages. Just search for the word you’re looking for and you’ll usually get several recordings to choose from. If the word has no results yet, you can submit a request and it’s usually filled in a day or so. It’s an incredible resource that I recommend you check out no matter what.

You can put these audio files on your Anki cards, so they’ll play when you look at the answer. The repetition that comes from listening to them while you review is pretty great. I find the audio helps me remember new words because they get stuck in my head over time.

Another option is to study two decks at once — one will be your Tae Kim grammar deck, and then you can pick a second one that already has audio files attached to each card.

There are a few options, but personally I think the best one is the set of decks from JALUP, which, unfortunately, are pretty expensive. Here’s a link to the beginner one — just scroll to the bottom to find a link to buy it. There are four stages with 250 cards for $30 each or $120 for the set. Not crazy when you consider the cost of a textbook, but with the abundance of free resources it’s not really a necessary expenditure. They also have a separate site with all of the decks and some additional features called JALUP NEXT. A cool feature of this series of cards is that the entire set builds on itself. It will introduce new things slowly, and use the things you’ve learned previously to make new sentences and introduce new grammar. It also has audio for every card. 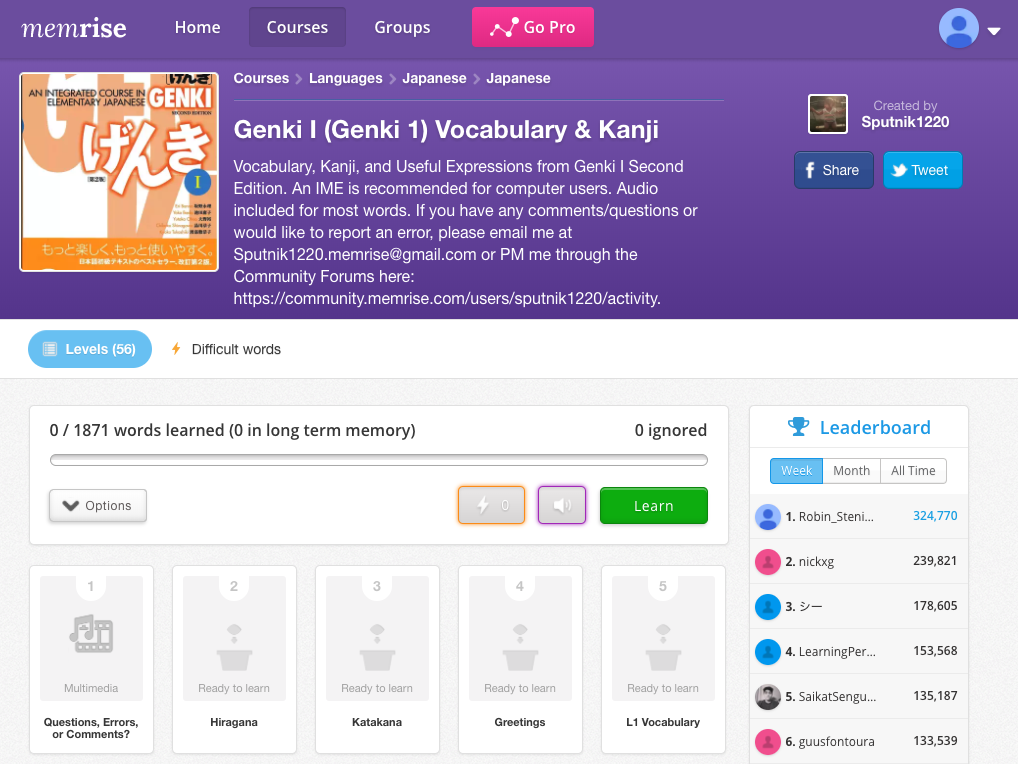 Lastly, you can grab a shared Japanese deck for Anki, like this one, or a Japanese deck from Memrise, like this one. The problem with these decks is they tend to be more focused on vocabulary instead of sentences, and it’s hard to know if they’ll be an appropriate level for you.

I’ll also talk about ways to get exposure to audio (like Lingq and Assimil) outside of Anki in the next post if you’d rather not use any of the options I talked about here.

And that’s it for part 3! In the next post we’ll take a look at finishing up Tae Kim’s grammar guide, and how to learn from TV, manga, and other fun sources.

I hope this was helpful and don’t forget to let me know in the comments if you have any questions!

I did not know about Forvo - what an excellent resource. ありがとうございます！

In Japan, I was immensely impressed by the politeness, industrious nature and conscientiousness of the Japanese people.

Congratulations @jeffbernst, this post is the second most rewarded post (based on pending payouts) in the last 12 hours written by a Newbie account holder (accounts that hold between 0.01 and 0.1 Mega Vests). The total number of posts by newbie account holders during this period was 5138 and the total pending payments to posts in this category was $4784.85. To see the full list of highest paid posts across all accounts categories, click here.