My mother took this picture on one of her trips to Japan. I am half Japanese and have duel citizenship between America and Japan. Growing up in Hawaii I always felt comfortable being immersed in both cultures amounts the diverse cultures present here. When I was a kid my mother would always tell me about our samurai ancestors with our family name being Miyamoto we are related to some famous swordsmen including the famed Miyamoto Musashi. In Japan people always introduce themselves bearing their family name first and their given name second since it is a important in Japanese collective culture and values to put your family first before your individual self. My imagination would always run wild thinking about samurai times in Japan with people wearing kimonos, riding on horse back etc. This picture of Mount Fuji or what Japanese people call "Fuji samma" depicts the mountain that is held with a high importance since Japanese beliefs are still largely influenced by Shintoism and animism.. places like this are believed to possess their own soul. Mount Fuji is a dormant volcano that has long been depicted in Japanese art such as in wood block prints, textiles and Japanese folklore. 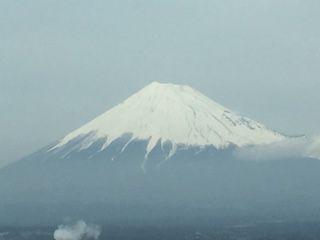 I am lovin it

I love Japanese culture and food!