The power of prose is of course to the story. The power of the story may be hatched from an idea. The idea, for an author, comes from all directions: thought or perceived. Interpreted or suggested. There, with the tools of the mind and heart, the shoots of the processed idea became incarnate. Thus, writing skills become the mainstay, which distinguishes one author from another.

Abdul Mukhid without calling himself an author, proved to have worked on short stories (and poetry) for the public. He sends his manuscript to a number of editors, passes the selection, then loaded on mass media literature sheets. Also, and this is really important, sending his work to the competition (fictional contest), so his efforts seem "heavier" as it competes head to head with the work of other authors. Not just once two short stories-even the last in 2016-won the championship. Luck? Of course not, considering not selected by way of lottery, but examined by a competent jury.

In fact, the collection of stories in this book is also the fruit of his victory in the short story anthology manuscript competition. When the author gives him a chance to publish, it is a kind of fairness that other writers need to emulate: that a number of works believed to be the "spiritual child" of choice, should be introduced to audiences. Not just to the jury. 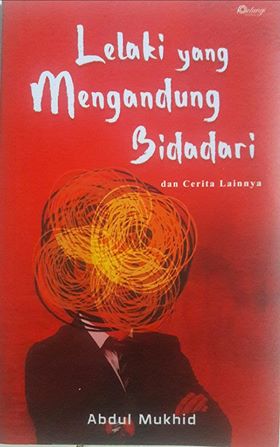 The book cover - photograph by Kef

Referring to the term short story, so Abdul Mukhid practiced his ideas in a story that is readable for 5 to 10 minutes. Why short? Because the author does not have much to say. He drives the reader out of conflict. Even if he gave the introduction, it's all to keep the reader's understanding from the beginning. Of the 17 stories presented, it places reality on a free dimension. The logic conveyed includes akli and nakli, something that makes sense (rational and realist) as well as beyond reason (irrational and surrealist). Surely this is not new, but more meaningful enrich the literary genre of short story genre in Indonesia.

Abdul Mukhid was spared from cliches, in a few short stories. For example the myth of crows as a death killer; the reward of God given to the wasted; the daddy who got his step-son pregnant; however we should appreciate in taking a point of view. The reader is guided to find answers at the end of the story, though the author often gives him a new question. That's why I'm titling: "what's left is longer". Almost all the stories of Abdul Mukhid's associates strive to let our imagination continue the assumptions after the closing sentence.

As the writers generally, then the world of authorship is also the source of its own ideas. It is natural that in some short stories, Mukhid affirms an author (or artist) with the fate of some unfortunate and partly exhilarating. And if what is needed is a concise description, it does not seek to lengthen for the sake of dramatization, for precisely-just as Putu Wijaya-the flow has a dramatic degree. Tragedy is the essence of most Mukhid stories, and naturally they (short stories) are entitled to inhabit the corner of our gloom. Does that mean the book is not entertaining? That's not the way I mean it, but rather suggests that you ponder for a minute or two, to be grateful that life is sometimes lighter than fictional fantasies.

At least, when we see a suicide event that begins the conversation of the character and the culprit, we hope it does not happen in the real world. If you are right to be invited into the past, make it a fun experience. When we get a hunch from a real person, that's part of God's plan. I think personally, the most contextual story that reflects the condition and situation that is happening in our beloved country is "The Land of Dusta". Mukhid did not mean to insinuate anyone because everything we experience today can be played by everyone.

Many readers expect a moral message on fictional stories, but I as a story buff do not demand it, especially if it is attempted in a nosy way. Just feel the burden of it, let the reader interpret with the background of each other's knowledge. Sometimes a good message is not spoken, but likened to. Back again at the point of view, that's the factor that I often defend in certain stories.

Abdul Mukhid who studied in English Literature department, certainly has adequate supplies and will not waste any opportunity. Whether it's a chance to catch inspiration, write it down, then announce it to the literary assembly.

Maybe we realize together, that writing the introduction is kind of throwing a boomerang. I have to be careful not to spoil, not to patronize either the author or the prospective reader, the not-especially-exposed feedback that makes me lose the ability to catch it. Let this short story anthology find its own destiny.