How to Catch a snake

The phone rings. On the other end of the line a panicked caller hysterically exclaims, “There’s a snake in my house!” My dad and I grab our snake catching kits and rush to the scene. We don’t know what to expect but there are different methods; How to... Catch a snake.

My mind is racing, what could it be? According to Dr Donald Broadly, author of Fitzsimmons snakes of Southern Africa, there are 140 different species of snakes found in South Africa. To compound the problem, there are over 100 different exotic species of snakes sold in our country in the pet trade, as stated by Shawn Hefer, Chairman of the East Rand Herpetological Association. Statistics of snakes removed in built up areas around Johannesburg taken over the last five years by SnakeCity show that every 1 in 10 snakes is an escaped pet. So, What could it be?

On arriving at the scene the first thing we do is to Secure the area thus ensuring that no people or pets are harmed whilst catching the snake. We proceed by cutting off all escape routes. Following this we seek out, identify and catch the snake.

Snakes are highly feared creatures as many people perceive that vast numbers are bitten and killed from snake bite each year. This is false according to statistics as - research by Dr Visser
On average only 12-14 people die from snake bite in South Africa per annum. This is 5x lower than people who die from lightning; more people are killed from dog bite or bee stings in South Africa annually. Approximately 18 people die on our roads each day making it far more dangerous rushing to the scene than being at the scene. 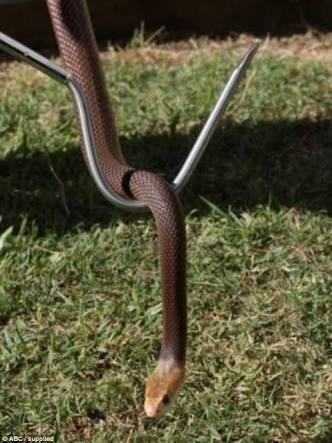 Depending on the species of snake, different methods of catching it apply. The most common diurnal snake in Johannesburg is the Rinkhals, part of South Africa’s Deadly Dozen and is 1 of 3 snakes in South Africa that can spit its venom. When catching this snake we wear protective eyewear. With a hook stick you can scoop it up on the first third of it’s body and simultaneously pick it up by its tail. You then guide its head into a bucket with the hook stick and let it slither inside. Oft times these catches only take a couple of seconds once the snake has been spotted. The most common nocturnal snake in Johannesburg is the Brown House Snake. This catch is an easy one as we just simply pick it up with our hands as it is completely harmless. Snakes most certainly do bite to defend themselves, just ask me... I have been bitten over 30 times by what we call our most valuable snake in South Africa. There is method to our madness in picking up these snakes with our bare hands, as we want to show that it is completely harmless to man. The best thing we can do is to leave it where we found it. This snake can save you money. Yes you heard me correctly. Now who doesn’t want to save money considering our country’s current economic affairs.
According to research done at SnakeCity one Brown House Snake can eat up to 70 rodents in a year so with 10 in your neighborhood you do the Maths. That’s where it’s value lies.
South Africa loses millions of rands from damage to goods each month due to rodents; more people get sick and die each year because of disease spread by rats than by snakebite. So a harmless snake like a Brown House Snake should be treasured and never killed.

Each time we go on a snake call out we don’t know what to expect...although it is an exciting, often adrenaline pumping experience, the greatest joy comes from seeing people change their attitude from “The only good snake is a dead snake” to leaving a harmless snake in their garden. It always amazes me that we catch adult snakes of between 5-15 years old in built up areas; these snakes having lived in that neighborhood all that time without being detected. Research by Professor Graham Alexandra of Wits University over a two year period tracking the movement of snakes using an inserted transponder showed that most snakes keep to about a 2km radius area where they live their entire life.
When you need help about How to Catch a Snake Who are you going to call? Snakebusters Gen and Clive

This is a speech that I gave at school as the topic was How to... I found this particle topic an interesting one as it is seldom touch on and ignorance about snakes is what causes superstition and fear.