Most valuable snake in South Africa 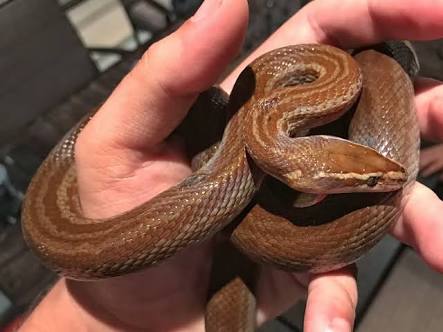 This is a picture of the Brown House Snake. It is the most common harmless snake found in the Johannesburg, South Africa region. It is distinguished by the unique white stripe that starts at the tip of the nose and runs through the eye to the back of the head. These snakes are constrictors meaning they don’t have venom to kill their prey but rather they squeeze their prey to death.

According to SnakeCity this snake is the most valuable snake in the Johannesburg region - not that in if you catch it you’ll get lots of money for it because you won’t, but rather it can save you money. One Brown House Snake on average can eat up to 70 rodents in a year. If you have 10 in your neighborhood that means 700 rodents in a year. According to statistics more people die from disease spread by rates in one year than people that die from snake bite. South Africa alone suffers millions of Rand damage every year because of damage caused by rodents.

If you ever see a Brown House Snake or even just a snake in general, leave it alone and think about the benefits of snakes. Snakes don’t desire to bite you unless you provoke them. Snakes are truly the best pets.

Snakes can save lives, will you save theirs?

Nice post. I wish all people will treat all wildlife with respect and view the killing of snakes in the same light as the needless killing of birds.

Thank you for your concern. I agree with you