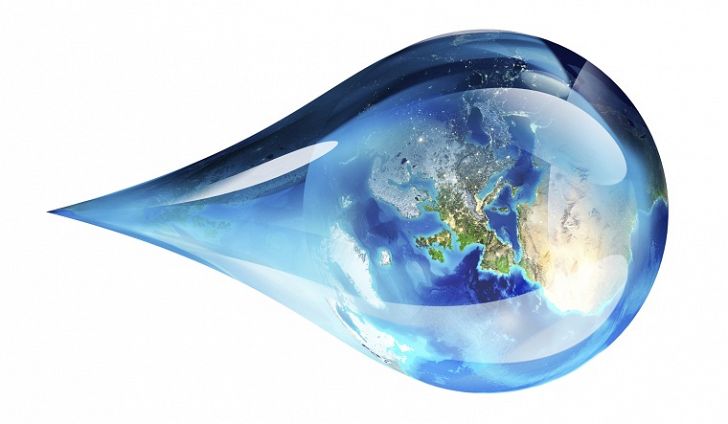 The hydrosphere consists of all the water found on earth –ice, liquid and water vapour; fresh and salty water. This sphere plays a huge part in sustaining life on earth as it provides habitats for animals in the polar regions in the form of icebergs and throughout the rest of the world in the form of oceans, seas, rivers, dams, streams and even ponds. Cloud formed in the atmosphere helps to replace fresh water supplies, through precipitation, that have been used and lost. The hydrosphere is just as important as the lithosphere and atmosphere. Together these spheres create and sustain ideal conditions for life on Earth.

The hydrosphere is constantly in motion. This motion may not always be obvious and visible. The motion of the hydrosphere is caused by many different factors including the wind, temperature and pressure. The hydrosphere extends approximately 12km above the Earth’s surface and several kilometers below Earth’s surface. In this region, 98% of the hydrosphere is composed of ocean water. Although this water is salty it contains many essential minerals. The salinity and temperatures of the ocean water combine together to form essential currents which maintain constant temperatures on Earth. The higher the salinity of the water the less dense it is therefore it rises to the surface edge. The higher the temperature of the water, the less dense it is too, therefore it too will rise to the surface edge. These two factors cause great currents such as the North-Atlantic Drift to form. Without this current the entire North America would freeze over as temperatures would decrease rapidly. Water current and temperature effect the temperature of the land and therefore the climate. Currently Cape Town, South Africa, is suffering from a huge drought. Water has become scarce. This has turned into a major problem for South Africa as water is essential for life. Without water one’s body cannot survive; hygiene becomes an issue and there is an increased risk of epidemic diseases breaking out. The cause for this crisis is simply the lack of rainfall. Cape Town has only had an average rainfall of 286.4mm in 2017. This city needs over 1200mm rainfall per annum in order to meet the water demand of the citizens. This drought has been the worst recorded drought in the history of Cape Town. Citizens are currently restricted to 50L of water per person per day. If a resident exceeds this limit they are required to pay a fine.

Cape Town is a city that experiences winter rainfall. This is due to the climate it is situated in. The cold Atlantic ocean boarders this city. Typically during winter cold fronts would pass through Cape Town for 2-3 days at a time. (A cold front forms as cool polar air stirs in the atmosphere creating a wind. This wind rushes over the ocean and land, cooling both as rain falls upon the ocean and land) This would bring with it the necessary rainfall Cape Town needs. Due to global warming – increased greenhouse gases clouding our atmosphere, trapping the Sun’s radiation and increasing Earth’s temperatures – the ocean and atmospheric temperatures are rising resulting in cold fronts not forming and passing over Cape Town. Without these important Cold Fronts, Cape Town has fallen into a drought stricken state. The provincial and national government need to work together in order to solve the water crisis in Cape Town as they consider using the more abundant water resources from the rest of South Africa.

Our Hydrosphere is a necessity. Without it life on Earth could not be sustained. We need to become aware of climate change and how our Hydrosphere is changing. By becoming aware of our actions and promoting water use awareness we can preserve the limited resources of water that we do have. You cannot change the world if you are not willing to look inward at yourself and see whether you are aware of the hydrosphere and preserving it.

Congratulations @capecobragen! You have completed some achievement on Steemit and have been rewarded with new badge(s) :