The Leg that Got Left Behind They say you learn something new everyday.

Well, yesterday I had my first detached leg experience.

It wasn't my leg I hasten to add.

My love was doing his usual excellent job at folding away the laundry while I sat nearby looking as helpful as possible, when I noticed a small spider trying to scurry away unnoticed.

He happened to be running across a white t-shirt, and as I looked it became very clear that said spider had left one of his legs behind.

Surely it is not usual to leave one's leg behind when attempting to make a quick getaway?

Whether or not this is the case, the thing that struck me most about the whole detachedness of the leg, was that the leg was twitching and moving around like a blind kitten searching for a teat.

This leg distinctly looked like it was searching for its body.

It was almost heaving itself around in some determined leggy conviction that its body was nearby, willing it on towards a beautiful leg/body reunion.

Either that or it was hellbent on revenge and searching for the nearest person to deliver a kicking to.

After witnessing such a phenomenon, I made sure to get on the interweb as soon as possible to try and figure out exactly what was going on.

Apparently spiders are able to detach or self-amputate their legs at will in a process we call autonomy. Which I guess kinda describes the situation well.

The theory goes that if a predator should grab a spider's leg, it can self amputate said leg and hop it so to speak.

The still twitching leg would then continue to occupy the predator, much like, I suppose, one would remain occupied by a person's arm if it were to come off while you were shaking their hand.

Meanwhile, Spidey-me-boy skips off to safety.

And begins the process of growing a new leg safe in the knowledge that its body is in fact still there in order to grow the leg from.

Oh, and I also discovered that while a spider is able to contract its muscles, it is not able to relax them again. So pulling legs in towards the body is all good, but our spidery friends need to force blood and other bodily fluids back into the legs to push them out again.

Fascinating and yet so, so disturbing.

So there we have it.

I have learned that

A man came round in hospital after a serious accident.
He shouted, "Doctor, doctor, I can't feel my legs!"
The doctor replied, "I know you can't, I had to amputate your arms!"

This autonomy ability that spiders have speaks to an existential conundrum that we all face. I know, I know. There he goes again rambling about deeper truths than what truly is. Indulge me for a minute, as I feel that everything would make sense in the end. This would only take an hour to read, so not that tedious.

It's quite pragmatic on the spider's end to be able to sacrifice is appendage for the sake of securing its safety. I think this is the manifestation of that adage "sacrifice a few for the good of the many." After all, the Vulcan that coined that is known for ruthless pragmatism, but I digress. On the flip side, having the ability to regrow limbs would mean that it could very well just take any limb for granted. This speaks volumes to thoughts about obsolescence, which I'm sure many of us can relate to.

Scientifically speaking, the discarded leg still moves because of neural commands already embedded before the amputation. But, if we look at it as every leg having a mind of its own, it's surely contemplating sadness and anger towards its former host for casually leaving it to die.

So, what am I trying to get at with all of this? If we choose to sacrifice our time to read long drawn out comments in favor of shorter, spammier ones then we follow the way of the spider with regard to prioritization. That is all. And, with regard to GIFs of spiders...

Haha! My goodness, your wit and insight astound me once again! I don't even know where to start with responding to this.... I think I shall just have to nod my head sagely....

Who woulda thunk the lowly spider could offer us so many deep and unexpected insights into our very truest of natures!

I think one of the main reasons I stay on Steemit is because I'm allowed to flex my wit without fear of being ridiculed. Admittedly, I'm still restraining it to 50%, but yeah, I've been known to stretch the full breadth from time to time. In the real world, I have suffered through tongue lashings from witshamers countless times. Frack the real world.

oooh that's tantalising.... I think you should stretch your wit to 100% all the time!! No restraints haha!

Frack the real world indeed. It's just an illusion!

I have no idea what might happen to the owner of that leg.
Maybe he indeed had one too many.

Ah yes, the affliction of too many legs is sadly, all too common.

Never, ever type spider into giphy, hahahaha, I imagine this to be sound advice worth taking.
I've always thought spiders were fascinating...but gross. I can't get over the gross factor no matter how interesting they are. Now lizards, the cute little ones they had all over Florida, they can do a similar thing with their tails. Eject them and grow a new one. And they also flop and wiggle. But for some reason this is far less gross than anything to do with a spider. (Well I know the reason, but it's very shallow of me LOL)

Yeah, there's absolutely no getting around the fact that they are gross and disturbing! Despite me trying to love every creature on this earth, there are some that just give me the heebie jeebies no matter what.

Anything that has its skeleton on the outside or has more eyes than me is clearly suspicious haha!

This hits close to home @johleen.
My kids are scared of spiders and every time one runs its little self across the floor you would think that someone had threatened their lives.
So to prove a point that spiders are harmless (so to speak) I picked one up and popped it in my mouth.
This led to a lot of screaming by the kids.
I laughed and accidentally swallowed the spider, this made me laugh even more.
I could feel something in my mouth and as I put my fingers in my mouth I pulled out this one hairy leg of that spider.
My kids are still scared of spiders and they now think that Daddy is nuts (well more nuts than before)

What I learned from my experience.

Nice blog post @johleen glad to see that you're back doing quality posts :)

Well, props to you for taking massive action to prove that spiders aren't actually scary, even if it didn't work! You'd be fine on one of those shows where they have to eat weird bits of animals and lie down in tanks full of insects haha.

And yes it really is isn't it. Nature is crazy and wonderful and very, very weird. :)

Yeah all of those things and more 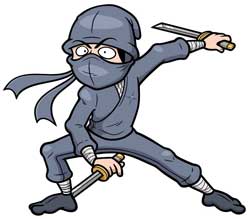 Sneaky Ninja Attack!!
You have been defended with a 35.08 % upvote!
To help keep my Jōki (蒸気) power strong I rely on the townspeople of Sōsharumedia (ソーシャルメディア).
I was summoned by: @johleen.
I have done their bidding and now I will vanish... The @OriginalWorks bot has determined this post by @johleen to be original material and upvoted it!

This wonderful post has received a bellyrub 5.35 % upvote from @bellyrub thanks to this cool cat: @johleen. My pops @zeartul is one of your top steemit witness, if you like my bellyrubs please go vote for him, if you love what he is doing vote for this comment as well.