THE MAKEUP MENACE- MANY FACES OF DECEIT 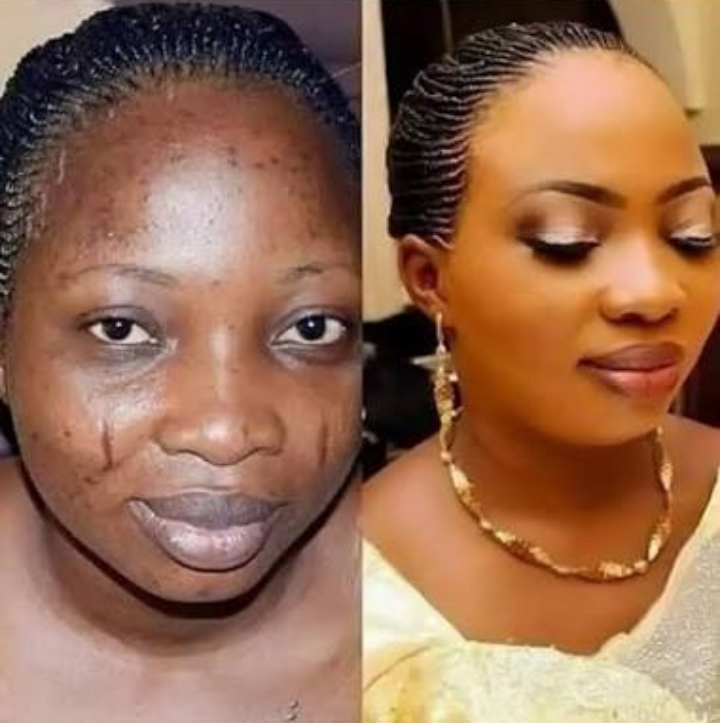 Deceit of A Wolf in a Sheep Fleece

I am not a sardonic writer, i love my culture and the beautiful traditional fashion that comes witj it but this is an issue that meets tge heart. Makeup is a world phenonmenal, females and some males can not do without it.

But in Africa-Nigeria; it is a new menace going viral as the real identity of ladies is hidden, a realtime headache for bachelors and single men like me and thousands more. Many ladies will disagree with this but "i am thinking out loud" and decided to put into writing. Fashion is what it's called, but goes way beyond fashion and cosmetics; many homes had shattered because of this, marriages dissolved, men had been decived into wrong relationships as a result of this. What about the Health implications? Conjuring several toxic chemicals on a bare skin in the name of beauty!

DAMAGES CAUSED
In my country, you could go out on a date with a lady and not recognise her the following day, the application of cosmetics is so confusing that you could never tell a real lady to a Barbie-Doll. The same lady you went out today might pass you by tommorrow and you never know you've met her before.

In China, a man once sued his wife to court for decieving him into marrying her, he never saw her without makeup until their wedding night. So he wanted the marriage disannulled. The major culprit was makeups! The court granted the marriage disolution. Several other cases all over the World. Another case was in Northern Nigeria west Africa. A man sues for divorce in a Sharia Court claiming his wife was too ugly but used Makeup to cover up until after their wedding.

Many will ask why this has to be a major issue, but no man has ever used makeups to trick a woman into marriage, so why does it have to be the other way round? Men uses makeups too, espcially in the LGBT community. Fortunately, The Lesbian, Gay, Bisexual and Transgender have a cause to use makeups as they are testing new grounds!

IMPLICATIONS
There is more to this cosmetics than meet the eye...

A controversial topic in which no female will be happy to agree with but very cruicial to discuss in a community. Aside from family and relationship fracture that has caused; let us all glance through some of the dangers of too much Makeups to the skin.

1.Women/Ladies will always be reluctant to do without it, but makeup products are actually endangering women all over the World. Several of the chemicals used had been tested to cause cancer in Animals; yet manufacturers had exploited loopholes in Government policies regarding safety and material testing, Tons of this products had been exported and imported into several countries with this toxic ingredients in them.

2.Lipsticks is swallowed, eye makeups are absorbed through the active and sensitive mucous membranes through the skin. This are liable to cause:

Hormone distruptions
Some distrupting chemicals could alter hormones in the body and lower the body's immunity then the individual is opene to multiple diseases. This in turn causes Reproductive organ damages as well as Neurological damages.

Cancer
Out of the many causes of cancer, cosmetics is one of them. Cancer and several fatal diseases can creep in from using many of this highly toxic products ingredients like Benzene, Formaldehyde and other synthetic Cheap ingredients.

Don't be Scared but Act wisely
This is a reach out to all the women in the World, ladies and girls; you are so amazing just the way you are!

Your Beauty us what drives us men nuts; but your health is extremely important to us. Man can not survive alone in this universe without women!