For almost 10 years I've been on Facebook, and during that time I haven't been blocked for something I've done. Years ago I had a 24-hour block because I was co-managing a fanpage and one of the other managers posted something, I don't really remember what was it but for what I can recall, it was something... understandable. I remember being mad at the guy that posted whatever it was posted, so I guess it was something that did cross the line. That one fanpage was erased by Facebook, and I had to accept my block. 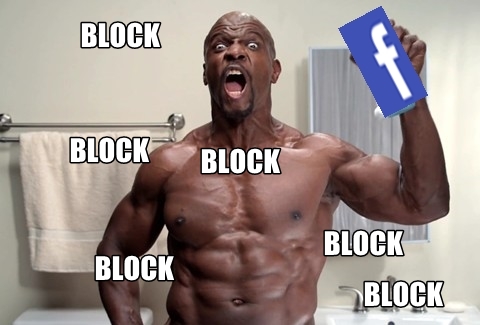 It was my pride and joy to never been blocked. Until last friday, that I was arguing with an Antifa that bluntly said something along the lines that if we believe that Trump has done anything good, then we're racists.

When people that stupid, that goes full George W. Bush on "either you're with me or against me" appears, usually I make use of irony. Now, as a Mexican living in Mexico I'm not exactly a fan of the Trump administration, but at least I can see that he's got some things right, like tax cuts and historically lower unemployment rates for blacks and latinos.

So I go: "yes, I am a racist. everyone that isn't a Mexican with black, Spanish, French, Native Mexican and Polish jewish roots is inferior". Yes, I have all that mix on me. Fun fact, I have white skin and green eyes.

Next thing I know, next morning I find out that I had a 24-hour block on FB. I may believe that I have a great sense of humor, but obviously this Antifa guy hasn't. Neither does Facebook. I had a message telling me that they've gone to great efforts in order to make Facebook a "comfortable and safe place".

What? Really? A social network has to be "a safe place"? What is wrong with people these days?

Anyway, it was a huge inconvenience because I use FB to deliver my articles to some online magazines and web pages and I had a couple deadlines that day, but there was nothing I could do (actually I had written a kinda shitty article that I wasn't really happy with and that day I learned about something I could use to make a better article so it actually work for better in a way). I went through this and went I was back, I wrote something like (free translation): "FUCK OFF YOU WHINY LITTLE BITCH THAT REPORTED ME". With some slurs. And including mentions to the mother of such individual. We Mexicans can be very poetic when we're frustrated.

Oh what I fool I was that I believed I could go unscattered with that.

This morning I was notified that I had a new ban, this time for three days.

I get it. As a Libertarian I agree that every company has the right to decide their own T&C. It's something you agree with when you first sign up and if you don't, then, well, don't sign up at all. But it isn't less frustrating that someone can't get into certain topics because people are getting offended.

Sorry, but there's not right to not get offended.

Anyway, that's what I wanted to say, now I got it out of my chest.