What bees taught me about Cambodia

I come from a family of beekeepers, so I had to check out a tour of traditional techniques. But I got more than I expected, and learned a lot about life in rural Cambodia. 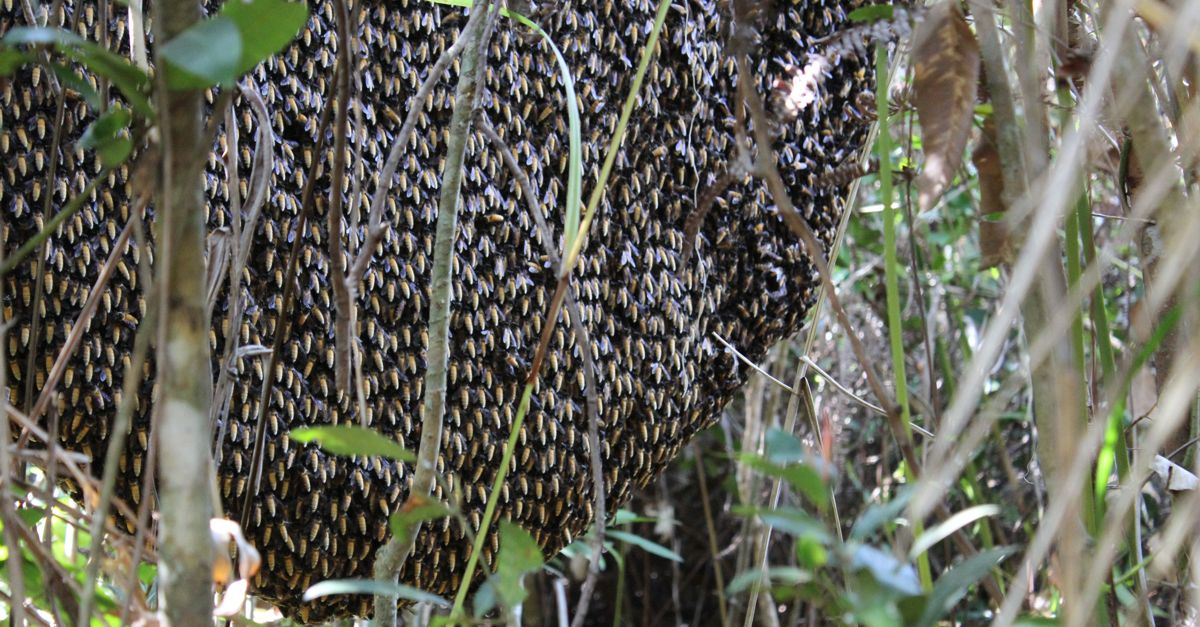 There are a lot of temples in Cambodia's Angkor Archaeological Park. So many, in fact, there's no way to see them all in one day. Tourists still try to see as many as possible, though, and this often leads to temple burnout. There are a few cures for being “templed out,” like a fish massage or a night of carousing along Siem Reap's Pub Street. But a more sensible and educational approach is to sign up for a tour with Bees Unlimited and see a side of the Angkor Archaeological Park that not many tourists get to see.

Bees Unlimited is really one man, Dani Jump, an American-born beekeeper who's lived in Cambodia for nearly 20 years. Because of his infectious curiosity, he's learned a lot about local culture and traditions and has been welcomed into corners of the country where Western faces aren't often seen.

When we called to book a tour, Dani told us his schedule was pretty full, but he had some room on an already-booked tour with only two people (he doesn't like to take more than six people per tour), and they didn't mind us tagging along if we were open to it. It sounded great to us, so we told him we'd take it.

Dani does something unusual and refreshing for a tour guide—he meets with all his clients the night before a tour to find out what they're interested in seeing. Dani visited us on our first night in Siem Reap and he told us the tour we'd be joining was one of his Combo Tours, which he tailors to the interests of each group. I really wanted to see the rafter beekeeping that's practiced in the more remote Cambodian villages, and Dani assured me that a visit to a colony or two was on the docket.

The next morning at the early hour of 7:15 a.m., Dani pulled up in front of our hotel with two tuk tuks (motorbike-drawn chariots) and off we went. 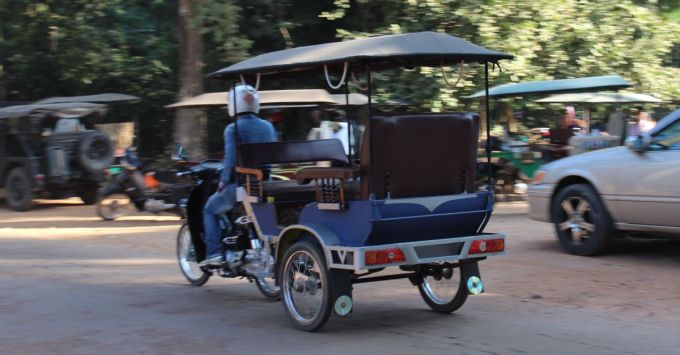 Our first stop was a local family-owned factory that made tofu every day starting with first light. When we arrived, their first batch had just finished (it takes about 30 minutes to make a batch), and was still steaming as they sliced it into neat cuboids. We were offered slices as it was cut. I'm not much of a tofu fan, but I've never eaten tofu this fresh before—it was delicious. A Trip to a Cambodian Market

Our next stop was a local Khmer market, which was an all-out assault on the senses. As we walked through the narrow, crowded stalls, we saw women violently hacking heads off live fish, a lady butchering live frogs (this one really bothered my girls), and stalls selling pig heads. We saw endless carcases of plucked chickens, piles of freshly killed snakes, baskets of duck embryos, and all sorts of things not normally seen by Western city dwellers.

Dani was leading us from stall to stall, having us try a variety of regional foods, which was why we visiting in the first place. We ate deep-fried rice ball-and-egg with a side of bean sprouts, deep-fried banana-filled glutinous rice balls, and silken tofu with ginger. 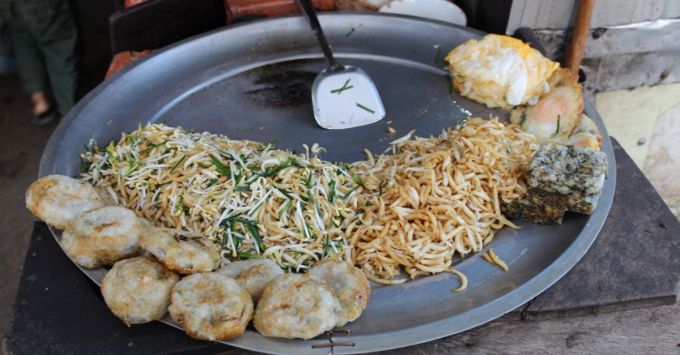 At one point, Dani got word there was bee brood for sale, which was the other main reason we were visiting this market. We had to hurry through the packed marketplace if we wanted to see it, because once it goes on sale, the brood never lasts long (the Khmer treat it as a delicacy). We got to the stall in time to see it being snapped up as fast as the vendor could put it in a basket. <4>Visiting Cambodian Villages
From the market, we got back on the tuk tuks and headed into the Angkor Archaeological Park, a huge section of land that holds, in addition to all the wats you've heard about, many small villages scattered throughout its boundaries. Our ultimate goal was to see a colony of rafter bees about 40 kilometers away, but Dani had a few stops scheduled on the way where we saw how people in the villages lived.

Despite the millions of dollars the park generates for Cambodia, there is little to no power provided to the villages inside the park. Most of the villagers do all their work with human-powered tools of their own creation—we saw all sorts of hand-made tools and contraptions that made their jobs possible. They are a community of Makers.

Each family seemed to specialize in one product that the rest of the community would use, like the family who made palm sugar. Twice each day they collect the sap from palm trees in cut-up two-liter bottles and then boil off the water with a homemade rocket stove and mix it by hand until it was the right consistency. Then they'd bottle it and make the next batch. 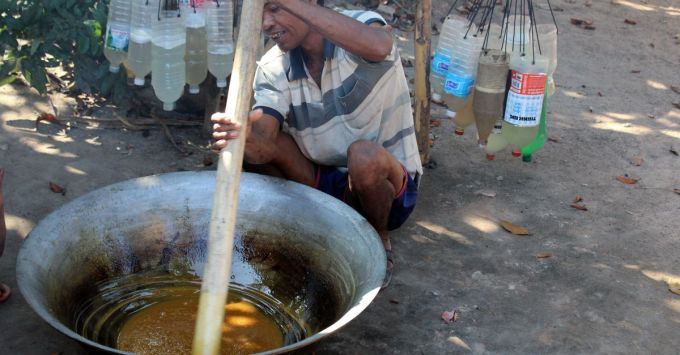 We met a whole family who made rice noodles entirely with hand-powered tools. They started with rice, ground that into rice flour, pounded that into rice dough, and then strained it into boiling water to make the noodles. The final product was then sold at a restaurant favored by locals. We visited an 84-year-old woman who made hand-rolled sticks of incense. She's lived through some dark times in Cambodia—we were told she used to feed the Khmer Rouge soldiers, but now she spends her days rolling clay onto thin sticks, her back bent from years of squatting over a long plank. My daughters each got to make one with her, and she was very gracious for their help. 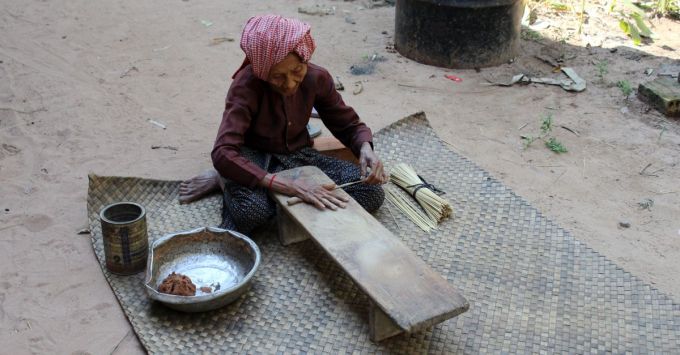 Dani knows a place that for $1 U.S. dollar (the dollar is Cambodia's currency of choice, by the way), you can try the Cambodian practice of hot cupping. Even though it's been made trendy recently by Gwyneth Paltrow, the Khmer people have long used this technique to treat all manner of ailments. The price is the same no matter how many cups you want (or will fit) on your back. My youngest daughter and I were reluctant participants (she did 4, I did 12, most other people got 16, but one guy got 30). I didn't find it all that pleasing, and it took a long time for the cup marks, which are essentially hickeys, to disappear.

And then it was time to visit some bees. We stopped off at a remote temple where a colony of Japanese honeybees (Apis cerana) had built a hive inside a stupa (a Buddhist relic chamber). The lead monk kept the door locked so poachers wouldn't steal the bees. 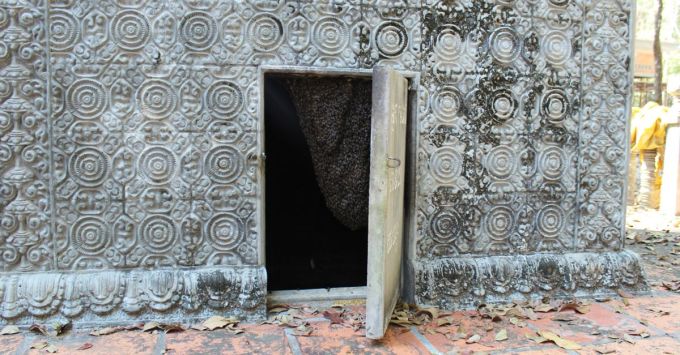 Dani has a business partner, a honey hunter he met during his early beekeeping adventures in Cambodia, who introduced him to rafter beekeeping. We rode out to the partner's home and met his sons, all honey hunters, then walked about a kilometer into the brush until we came to a swampy tract of land.

We threaded our way through an overgrown path until we got to our first rafter bee hive—loaded with giant honeybees (Apis dorsata). It wasn't time for harvesting yet, so we couldn't get too close, but we got close enough to see that these bees are big indeed. As we were observing the bees, the honey hunters started getting excited and Dani said, "We have to go!" as a angry buzz filled the air. We quickly retreated as one of the hunters fired up a traditional smoker (a tool used by beekeepers the world over), which was just a handful of dried grasses.
![bb-siem-reap-rafter-1-smoker.jpg]
( 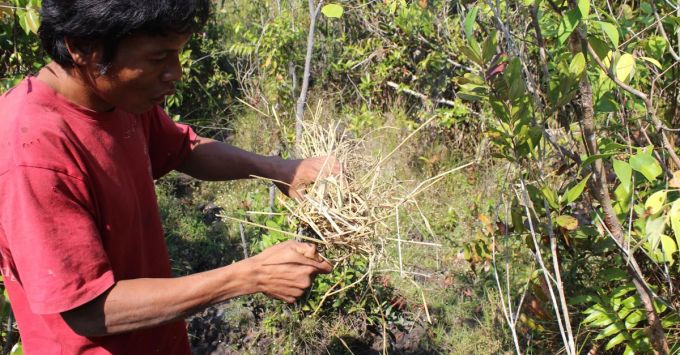 )
As if that wasn't exciting enough, we went off to see another rafter hive on the other end of the property across a swamp. Again, we couldn't get too close and we had another "Time to go!" moment, but I was glad to have gotten a fascinating look at this different style of beekeeping. Here's how rafter beekeeping works. The giant honeybee makes its hives on angled tree branches, so a honey hunter sets up a sturdy stick at an angle in a secret location favorable to the bees. Usually a colony will come along and start building their hive right on the stick. When the hive gets big enough the honey hunter returns and harvests a section of the honey (they don't wear veils or suits, by the way; they just use smoke and a big knife), leaving a little for the bees to start over again.

At least that's how Dani and his partner do it. Dani said the hunters used to just harvest the entire comb (cut-once-take-all), but over time, he convinced them to use the more sustainable approach of leaving a little comb behind (a "honey head") for the bees to rebuild. The hunters found that they were able to get two or even three harvests out of the same hive of bees each season, instead of just one.

So if you go to Cambodia to see the magnificent temples of the Angkor Archaeological Park (which you should; they are amazing), I recommend taking break from templing one day and going out with Bees Unlimited to see some of the less explored regions of the park. Just plan ahead, Dani's only one man, and he books up fast.