A few days ago it was time to bottle up my first batch of mead. I have a fair amount of experience brewing all-grain beer with a friend who has all the equipment and making partial extract/grain batches at home on the stove. Brewing takes time and commitment. You have to block time out of your schedule around when the brew needs your attention. Each beer is truly yours, birthed through dedication and care.

Last year I sold all my equipment for making partial grain brews, and although my friend lives less than 5 minutes away, our schedules just don't match up to make beer together currently. Since I've recently gotten into other methods of fermenting, like sauerkraut and kimchi, I thought I could experiment with some small batch beverage brews. I may attempt this with beer at some point, but having never brewed mead I decided to give that a try. 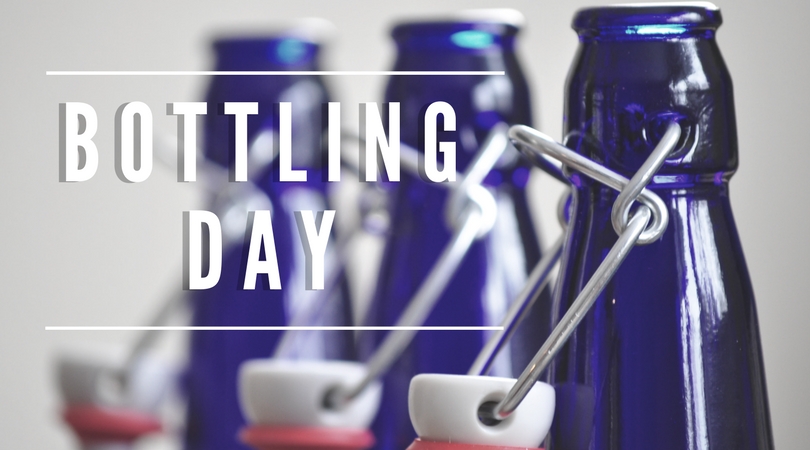 There are aspects of brewing that remain the same allowing you to apply past experience: sanitizing, racking, bottling. But I didn't think my beer experience would apply to mead. I'd have to learn from the start, so I went with a "fool proof" recipe: Joe's Ancient Orange Mead.

There are Joe's Ancient Orange Mead recipes aplenty online, but it's simply honey, a piece of clove, cinnamon stick, raisins, and an orange. Now the odd part is that it calls for baker's yeast. Yep, that little packet of yeast you use for making bread. This really didn't seem right to me since all my experience in brewing beer involved careful selection of what yeast to use. And brewing yeast is very specialized and specific. But, a lot of people online say this Joe recipe is good, even a fellow Steemian I've come to call friend (@tinypaleokitchen), so I followed the recipe and directions exactly. This crummy phone picture shows how the mead looked at the beginning of fermentation.

I went against all my urges to do things an experienced beer brewer might want to do. "Don't rack into a secondary" and "you know it's done when the fruit sinks to the bottom" and "use a packet of baker's yeast" were all things that just didn't feel right to me.

I also used a neat fermentation lid that I use for kimchi and sauerkraut that I thought could work well for mead as well. If I ever try small batch beer I'll use a traditional brewing airlock on a one gallon carboy.

The recipe said fermentation should take about two months. So I set it in a dark cabinet, checking on it occasionally to observe the churning fermentation process.

Well, since this post is called bottling day, I'll quit beating around the bush. You're probably wondering how it turned out. To put things simply... not very good. 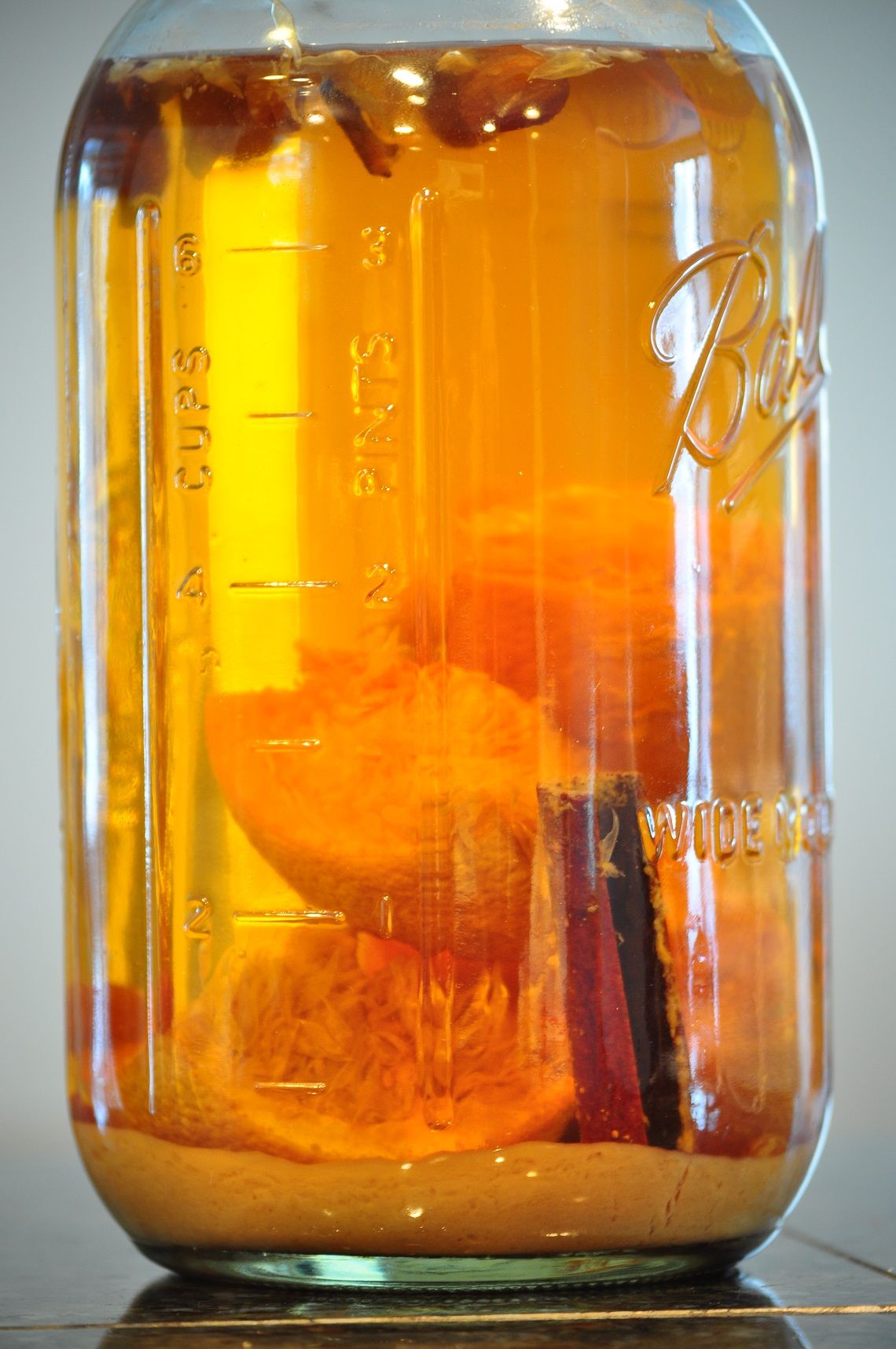 The mead got quite clear and looked pretty... but looks can be deceiving.

I think the main issue is that I waited for the fruit to sink, as the recipe said, rather than bottling a couple days after signs of fermentation vanished. The mead clarified and the last of the fermentation bubbles went away at about the two month mark. It took another three weeks before the fruit sank, leaving the mead to sit on the spent yeast.

Now, I'm pretty sure it doesn't matter what you're brewing—beer, wine, mead—leaving the brew to sit on dead yeast cells is bound to pick up off flavors. That's why we rack into a secondary vessel for longer aging/fermentation periods. I think, in the case of this mead, this extended period also drew some bitterness from the orange peels, as that's the most prominent taste on first sip—just like biting into an orange peel.

The strange tangy characteristic of the yeast is very pervasive on the nose as well. I was hoping for something on the sweet and delicate side of the spectrum, but this is too strongly overtaken by the bitter orange peel and yeasty off flavors. When I sold my brewing equipment that included my hydrometer, so I didn't take any readings to calculate specific gravity. I suppose the off flavors aren't to the level of making this mead unapproachable, considering I drank a whole glass while writing this article.

Since this was a small batch (requiring less than 2 pounds of honey) I don't consider it too much of a loss. I'll take what I've learned into my next batch, and likely try a more serious mead recipe... calling for a more specialized brewer's yeast. I don't doubt this recipe could have turned out favorable if I bottled it about three weeks sooner, I'd just like to attempt a different recipe for the sake of experimentation and learning.

Maybe if I let this one sit in the bottle for another month or two it will mellow out?

If I were to suggest anything, it would be champagne yeast. I use that for all my ciders, and it offers no real flavors of its own.

I think you're right about maybe having left the mead on the fruit too long; orange peel is a strong flavor, but I bet it dissipates in time.

Also, if you don't plan on consuming all this first batch, set some aside and try it in 6 months. I bet the flavor will have changed significantly.

I bet the pictures look somewhat familiar to you, @negativer! They remind me of your color challenge post from yesterday. Hey, are you guys in cahoots?

We do seem to have many similar interests Jayna. Unfortunately, I'm not growing an embrionic old god in my brew.

Ha ha! Unfortunately? That cracked me up. But the point is that one could almost imagine something foreign and embryonic growing in there! 🤣

That's what I was thinking. I'm going to let the remainder just sit in the bottle for a few months and see if that mellows things out. Same thoughts on the yeast; many of Charlie Papazian's mead recipes call for champaign yeast and I'll be trying one of those next.

Perhaps this will teach you to leave out citrus fruits...

Who waters down honey, floats a bunchof citrus fruit in it, then adds a sugar eating micro-organism into a jar just to leave it sitting for a couple of months?
Psh. Weirdos.

Thank you my robot overlord. I'm honored that you've chosen my post to aid in your campaign for world domination.

That's weird AK. I don't remember anything in my recipe about the fruit needing to sink to the bottom. Good thing you started small huh?

It didn't necessarily say the fruit "needed" to sink to the bottom, it was more suggestive I suppose. I remember thinking it looked done, but then put it off thinking "meh, it said I could wait for the fruit to sink." I think it would have turned out better if I just bottled it when I first thought I should. Leasons learned from laziness I suppose.

I'm curious on your experience with this recipe. How would you describe the end result? Do you rack into a secondary fermenter for a short period before bottling? I may give it another try after attempting something different.

When are you starting the next batch?

Hmm, good question. Perhaps sometime in March. Mead takes longer than beer to ferment. Brewing beer can be a few weeks of fermentation while it seems some meads can call for a few months. So if I start a batch this next month, I'll be able to enjoy it as summer starts.

Sounds like perfect timing to me! Also, I just sponsored you for an @steembasicincome membership.

You look like you are having a heck of a fun time with your brewing, @aksounder!

I try to have a heck of a fun time with anything I do Jayna. :)

That does not surprise me one bit somehow! 😊

For some odd reason, I find this post quite inspiring, AK. ^^
Makes me want to jump up and start fermenting things.

Now where to start..

That's a great idea Josie--glad I could offer some inspiration. It's fun to do small batches and only takes a small cost to get started. And you can ferment beverages or food. So many options! I'll start another mead next month, but will be mixin up a batch of kimchi next week.

Fascinating! I look forward to hearing how it's flavor changes. Bottleshock is what we call it in the wine industry - when it's a bit funky or not "quite right" after bottling. Give it some time :) Can't wait for the update. Cheers.

Thanks Sarah! Rather than bottleshock, I think it's just a matter of the bitter orange peel taking some time to chill out.

I'll have to take a peek at your blog; I'm also a bit of a wine enthusiast. I took a class on Italian wines years and years ago that taught me a lot. I'd say that was the beginning of my amatuer somm life. Hahaha.

$0.00
Reply
[-]
bex-dk (61) 4 years ago
This post has caught the eye of @MuxxyBot and has been nominated by the curation team.
If chosen it will feature in a curation post by @MuxxyBot.
An image from your post may be featured.
Please reply to this comment if you accept or decline.
$0.00
Reply
[-]
aksounder (57) 4 years ago

I accept! Thank you very much Bex.