onceuponatime (72)in #memechallenge • 5 years ago

and asking themselves why should women be the only ones who get to remain anonymous.............

A counter-culture has been rapidly growing amongst European young men! 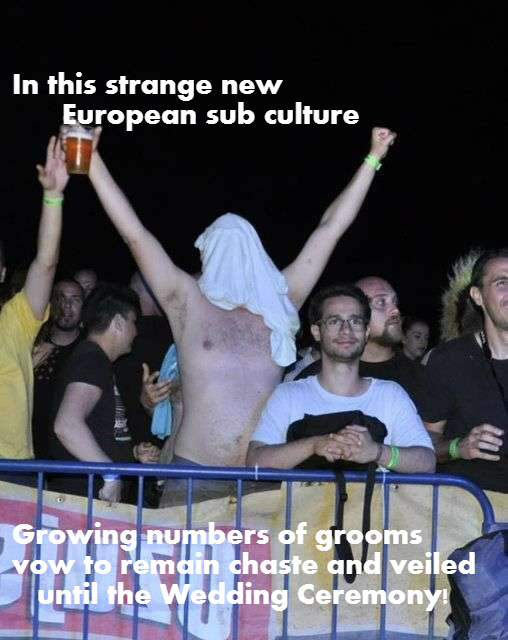 Hmm.... he's the only guy holding a beer in his hand.
Sometimes, I wonder if the veil was to give the groom a surprise. :-)

I suggest that you hire a dancer to do the Dance of the Seven Veils for you - and then you can let us all know!

(About the beer - looks like his so-called "friend" is trying to grab it out of his hand!)

I had to google for Dance of the Seven Veils. Guess could be in some bachelor's party.
What are friends for? To help you finish you beer. Especially when you are paying for it. :-)

FUNNY! Since I come with a light heart, I won't take this one the "wrong"way. Thanks for sharing, namaste :)

"wrong ways", like beauty, come from within. If you don't have it within you, you won't see it outside of you :-)

Their mothers are coming to pick them up :)

Must make it hard to drink that beer!

A true pro will overcome all obstacles to downing his beer!

Thank you. It got seriously downvoted by whales who don't do any posting themselves however. Oh well.

Fun fact: that picture was taken in Croatia. You can see 'Ožujsko' banner, name of our most popular beer.

I've got no idea what I did to attract the attention of such a serious bot!

We aim to please!

Hello Friend ... I do not see any woman in the picture :)

Why would you expect to? I do not think that you understand the meme.

Well I read the words ... and I knew that the picture is special to defy Miami ... I know that

Although I usually hope to craft my memes such that they can be taken on more than one level, you seem to have come up with a sub-level that I hadn't considered and can't even comprehend. Congratulations, I guess.

That's great!
How's the view from down there? Obstructed?

He is making hints at the ridiculousness of the trojan horse muslim tet offensive being created to balkanise and overcome the European population from within.

great things, many veiled women because of their desire to cover their heads not to be seen nakedness, because in Islam a woman shall berjibab. and the veiled women of the Christian religion are usually people who are pious in church ..
@onceuponatime

When a religion of also comes with its own form of governance (shariah) and in the spirit of inclusion are brought into a country with western law, there is a problem.

Muslims, a majority (51%) agreed that “Muslims in America should have the choice of being governed according to shariah.” When that question was put to the broader U.S. population, the overwhelming majority held that shariah should not displace the U.S. Constitution (86% to 2%). …

Even more troubling, is the fact that nearly a quarter of the Muslims polled believed that, “It is legitimate to use violence to punish those who give offense to Islam by, for example, portraying the prophet Mohammed.

If people want to read more, please do so here:

For the methodology of the study:

STATEMENT OF METHODOLOGY
The polling company, inc./WomanTrend conducted a nationwide online study among 600 Muslim adults living in the United States (age 18+) on behalf of The Center for Security Policy on June 1-10, 2015.
The sample was drawn utilizing online opt-in panels of respondents that have previously agreed to participate in survey research. Potential survey participants were recruited using from multiple sources using a dynamic sampling platform for verification, real time profiling, and random selection based on project requirements. This multi-sourcing model increases reach and capacity, improves consistency and minimizes bias.
The methodology used for this online survey instrument is consistent with international industry standards outlined in the ESOMAR Guideline for Online Research (https://www.esomar.org/uploads/public/knowledge-and-standards/codes-and-guidelines/ESOMAR_Guideline-for-online-research.pdf).
The original survey instrument screened respondents for age, religion, gender, and region. An online sample frame was selected for this study due to the difficulty in reaching Muslim-Americans over the telephone on account of their low incidence among the nationwide U.S. population (http://pewrsr.ch/1LsdBs8/; http://bit.ly/1LsdAEA). The final questionnaire was approved by authorized representatives from The Center for Security Policy prior to fielding.

Please ... We are not attacking any religious belief ... I am a Muslim and respect all religions

What.?? I do not intend to attack any religious belief. but I say the core of the post, as saying that most women in Europe wear veils
@mars9

You see they always go straight forward to religion :/

thanks to all the information, and forgive me if I am guilty of making sense of all this.

The RONCO of social media...set it and forget it

Exciting ! Thank you for sharing!