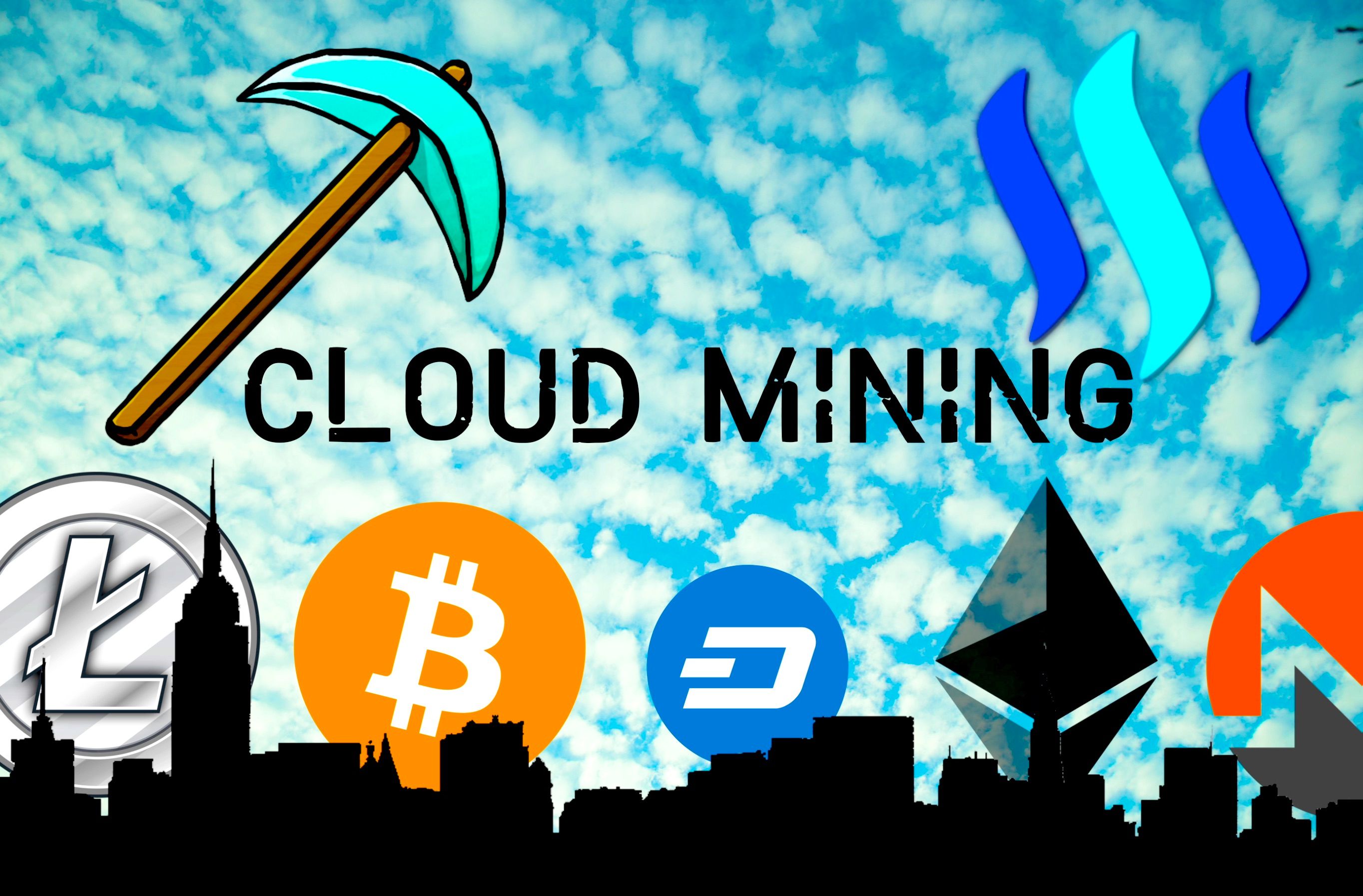 The idea of mining can appear daunting but it is far simpler than you might imagine and once everything has been set up, one can just sit back and watch the money roll in...

I have been cloud mining for two months and would like to share with you what I have learned.

Mining is the use of your computational power to process crypto currency transactions, to secure the network and to keep everyone in the system synchronised together whilst ensuring no one individual has absolute control.

And it provides a small reward in exchange for this essential service required to operate a secure payment network.

You may have noticed the mining fees on your Bitcoin transactions?

What does Cloud Mining mean?

Instead of using your computer, cloud mining utilises a remote datacenter with shared processing power.

This type of mining allows users to mine from the transactions going on for any number of coins without having to manage their own hardware.

The miner’s computer doesn’t even have to be running to be mining. Which for me is perfect!

What is Hash Rate?

The hash rate is the measuring unit of the processing power of the network, which must make intensive mathematical operations for security purposes.

When the Bitcoin network reached a hash rate of 10 Th/s, this meant that it was making 10 trillion calculations per second.

This measurement is also used to determine your own mining power. For example, I am currently mining 50 Mh/s with Dash.

What does 'difficulty' mean in this context?

The block-chain is made out of blocks!

So, during the mining process transactions are packed into these data blocks and are randomly assigned with a header.

Miners compete to match the block's header with a nonce, an arbitrary number used only once, to get a short alphanumeric code called hash, which must have a value below a certain 'difficulty' target.

Each hash accepted by the network is rewarded with coins. But the competition will exponentially increase as more miners join the network.

So, as more people start to mine a particular coin, the difficulty of finding valid blocks is automatically increased by the network to ensure that the average time to find a block remains equal to 10 minutes. As a result, mining is a very competitive business where no individual miner can control what is included in the block chain.

So, ultimately 'difficulty' is a measure of how competitive the network is whilst trying to find a hash below a given target.

How has mining progressed over the years?

In the early days of Bitcoin, anyone could find a new block using their computer's CPU. As more and more people started mining, the difficulty of finding new blocks increased greatly to the point where the only cost-effective method of mining with your own machine was by using specialised hardware.

This is why cloud mining has grown in popularity recently.

Which company do I use for Cloud Mining?

They are the largest Bitcoin cloud mining provider and from what I can tell they are one of the most reliable and trustworthy companies in a world where it is easy to get fooled into investing a bunch of money for minimal or no payout.

I have learned this by observing the experiences of other miners. How much do I make from Cloud Mining with Genesis?

I have currently invested around $500 into the mining of Bitcoin, Dash, Litecoin, Ether & Monero.

I receive daily rewards now of around $4 worth of crypto. And I will continue to receive this until my two year contracts are done. With the exception of the Bitcoin contracts which are lifetime contracts.

So if you do the maths, I will make my money back in 125 days and will then enjoy pure profit for a further 605 days.

And let's not forget that the value of these coins I am holding is increasing at the same time.

In addition to this, I will use the profits from the mining to buy more two year contracts, so the process is ongoing and the daily reward are always increasing.

How do I monitor my mining profits?

I have directed all my mining rewards to a particular wallet called Exodus.

I like this wallet for because it caters for a number of coins in a user friendly manner.

Though if you are going to use Exodus, watch out for the mining fees when making Bitcoin transactions, which are extortionate at times! Lucky for all those Bitcoin miners ;)

I will do a separate article on the Exodus Wallet and it's strengths & weaknesses.

Hope you have learned from this presentation and if you are going to start cloud mining with Genesis Mining I would very much appreciate you using my referral code to gain a 3% discount, which ultimately benefits both of us!

Feel free to ask me any questions and I will do my best to answer them for you.

I think nowadays altcoin mining become faded. Since mining is not a good solution for scaling up the altcoin. The altcoin is going to change from POW to POs. And there are more and more ICO with fixed amount of tokens. So the future of mining is not so optimistic...

The first thing we should know is that the mining difficulty increases exponentially right now and Cloud mining ethereum is really not recommended.

If you want to catch the appreciation, just buy the token on exchange, dont mine it.

Fair point. I cannot account for the long term rewards yet. Thankfully most of my mining investment was into Dash x11

"And let's not forget that the value of these coins I am holding is increasing at the same time."

But so is the mining difficulty but your hash rate is not (unless you pay for more).
I think it's probably a better investment to simply buy Bitcoin and other cryptocurrencies, personally.

If you can benefit greatly from referrals, well that's probably your biggest source of income then on these mining platforms.

I do agree with you 100%. However, I am a trader addict so to speak. Well, to be fair I am an everything addict!

So what mining does for me is prevents me from playing with these coins in the markets.

It locks me in to two year contracts where all I can do is watch. From my perspective, this is a very good thing :)

Awesome post. I finally understand what that is. Hear so much about it all the time, and had no clear explaniton :)

Thanks very much for the comment. Yes, was aware for some time that lots of people were talking about this, but not so many explaining how it all worked? To be fair, I didn't go into the mechanism of Genesis Mining much.

And in fact, there should really be another post to explain more... ;)

My pleasure to share it so that others may reap the rewards as I have :)

This is very helpful. Thank you! I've bookmarked it and it is now on my crypto investment bucket list! :)

Happy to help. It's a solid investment if you go for it. Personally, I enjoy that once I have bought a 2 year mining contract, I cannot unbuy it! In trading it's easy to move coins around. In mining it isn't, so it's like an investment you can't play with :)

Many thanks, I've been fascinated by this and now have a place to start. Will check it out and if I go forward will use your code for sure.

How u getting on with that? ;)

Oh, lets just say I've got a long way to go! ;)
So exciting to see the possibilities. Hope you've had a great day!!

Many thanks. Am pleased you found it to be helpful :)

You must welcome my dear friend:))

It looks quite interesting. I'm currently mining on my own machine with a gtx 1070. With some alt-coins (Digibyte, ZEC) I make between 6$ - 9$ a day. A comparable mining contract is about 800$ for 2 years. I find it a bit daunting.

I was thinking of buying a mining rig, since I bought my computer to game not to mine. But the investment is about similar to a mining contract..

Good info to have. Thanks for sharing that :)

Thank for commenting. Always interesting to learn more about the 'real' mining world. Cloud mining feels quite disconnected in a way.

Thanks very much. Am pleased you found it clear. It's still bloody confusing to me :)