Modi is in the voyage with Shi 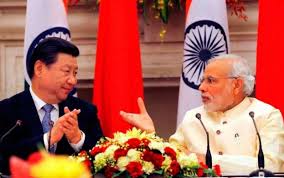 India's Prime Minister Narendra Modi has reached China ahead of two-day conference The meeting will be held between the Prime Ministers of the two countries at 3:30 pm on Friday at the Museum of Hubei. At the same time, the top two leaders of North and South Korean two countries are at the same time this 'informal meeting of two top leaders of India and China' as a warning for the western world.

Meanwhile, round-table meeting will be held between the representatives of the two countries soon after the meeting. Modi will also attend a dinner at the invitation of Modi. The second day of the conference will take part in the maritime boat after the next discussion of the two leaders. It is also known to spend quite a few hours on the lake side alone.

Although the media was not told anything about what to discuss. However, trade relations between the two countries are also expected to be discussed. In particular, the issue of 10 percent of aluminum and steel products may come up recently by the United States. It should be noted that on Thursday, China's Prime Minister Narendra Modi arrived in China for an informal meeting.

This post has received a 0.65 % upvote from @booster thanks to: @sabila.