Are the Rich Paying More in Taxes Than They Used to?

In general I try to stay out of politics in internet discourse, since it often devolves into a heated shouting match. To say the rich are paying more in taxes is such a popular misconception which is so readily resolved that I feel it would be a great disservice not to address it, however.

According to a recent study, 44% of Americans believe income taxes now are higher than they were in 1980 [Source]. This is patently false, though. I will go into some detail now as to why that's the case, starting with a basic explanation of how income tax works.

What is a marginal tax rate?

In the U.S. and most other countries with currency and organized government, residents have to pay income tax, with some exceptions (listed here). Generally, income tax is based on brackets. With a bracket system, the more you earn in a given year, the larger the percentage of those earning you have to pay to the government in the form of taxes. The marginal tax rate system is slightly more complicated, in that you only pay the higher rate on the incremental difference in income from the previous bracket. Last year, the highest tax rate of 39.6% only applied to income above $415,051 for a single earner. It gets more complicated, though, when you factor in social security tax, which has a limit, but I digress.

39.6% sounds like a pretty high tax rate, when has it been higher?

The short answer: Continuously starting during World War II and lasting until a brief period starting 1986!

Don't believe me? Here's a graph of the income tax rate during specific epochs of U.S. history: 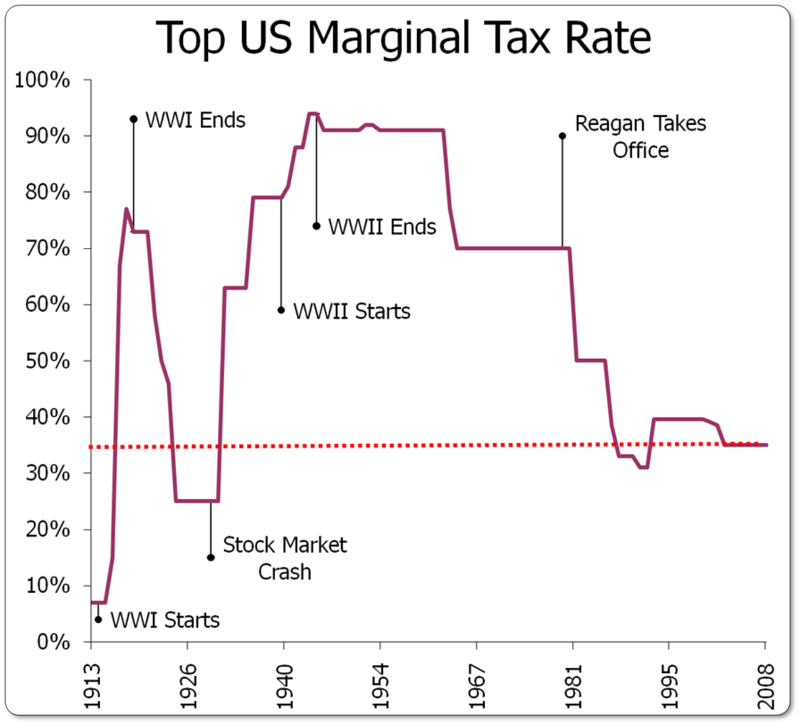 When we look at a more comprehensive picture, we see that most forms of tax are down from their historic means, though not nearly to the extent of the income tax (wages or unearned). Of course, the more astute readers will question why the hell capital gains tax is so much lower than wage tax. Taxes on those who create goods and provide services are almost twice that of those who are directly benefiting from the value of that labor? But again, that is a completely different discussion which distracts from the thesis of this article.

Maybe the top tax rate has gone down because the wealthy are earning less?

The age of the robber barons is over, right? Yet again, the answer is no. See here: 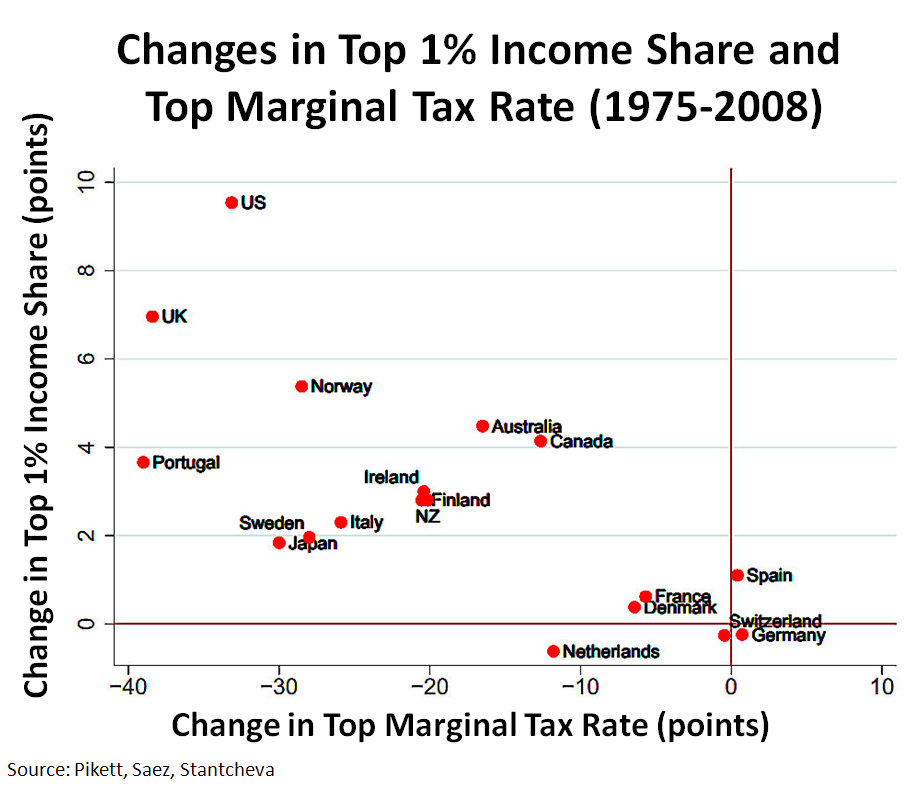 In essence, this scatter plot shows that the U.S., despite having decreased the top marginal tax rate by >30% over the past 33 years, managed to have the top 1% rise almost 10% in their share of all of the income. This is pretty scary; it implies that the wealthiest are not only getting more of the pie, but are also keeping a much larger portion of the slices for themselves than less wealthy earners. The U.S. is more extreme than any other country in this trend.

Well, I hope you found this article educational. I did let some of my political opinions slip into the prose, but for the most part I tried to keep it purely fact-based.

Here is the original source of the tax bracket data used in these plots:
https://files.taxfoundation.org/legacy/docs/fed_individual_rate_history_adjusted.pdf

Actually they pay less because of many benefits the entrepreneurs are giving back to the society such as giving employment and job.

No surprise here the rich make the rules http://www.bbc.com/news/blogs-echochambers-27074746

Great article. Followed. This is the stuff I like to see in my feed.

hmmm.. that's a minnow to the really rich pips
I've seen a documentary of rich kids from HK and China
their small yacht costs more than that
one Chinese guy is a jeweler in the UK
he sells and hour glass of diamond for 750k
i wonder what he makes in a year

I'm only talking about the US, I can't speak to how other countries tax their citizens. But yes, even if that tax level is reasonable for someone earning $500k a year, there should be more severe brackets for those earning in the millions.

I am definitely not in the category you describe, Maybe federal income tax itself is not at the highest, but I know where I am at sales tax keeps going up, and with Obama Care being mandatory that is now a tax. They just get there money other ways it seems

The rich get richer, and the poor get poorer. Sad reality :(

Its unfortunate, but it's true - the rich also have a much greater ability to pay less tax because there are more options for them. The question is, is there a solution to this?

In the US, reversing Citizen's United would be a huge step in the right direction. Getting dark money out of politics would make it a lot easier for politicians to not have to cater to the ultra-rich (corporate) donors!