US Already Bankrupt, It Just Won't Know It For 5.6 Years - Why We Need Bitcoin 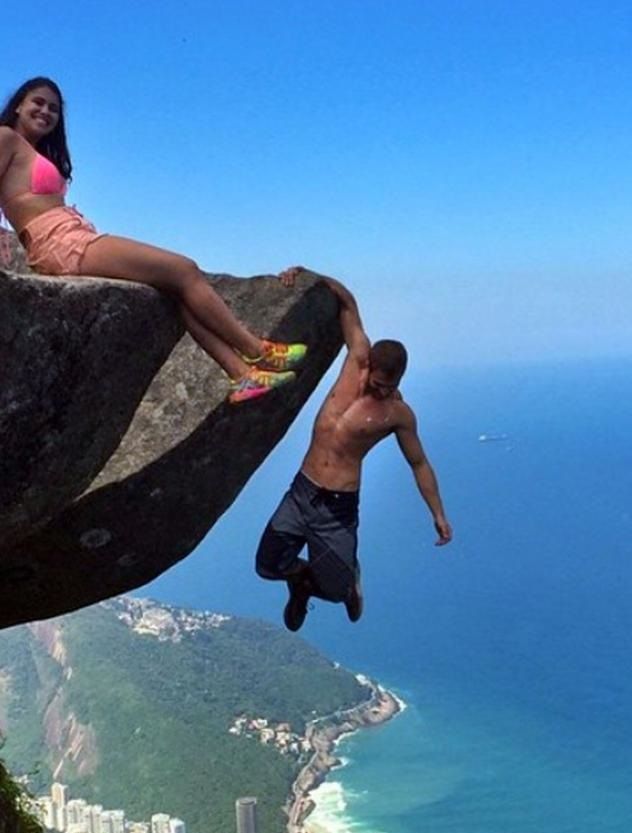 Actually, it's even worse than that.

In between posting images like the one above, I'd post all sorts of scary charts with rather obvious, inevitable outcomes such as the following: Nobody pays attention to these.

I've had to simply bide my time and wait, knowing that my calls for financial prudence and an end to money printing would fall almost entirely on deaf ears, but wanting to have my "I-told-you-sos" well established such that I can taunt everyone once the blood is running in the proverbial market streets.

Given Jamie Dimon just released another annual shareholder's letter chalk full of lies for his clients, directing them as usual to become bag-holders for his bank's future bad trades, I figured it was a good time to remind ourselves why he's openly lying to you when he says "“the Federal Reserve and other central banks may have to take more drastic action than they currently anticipate … reacting to markets, not guiding the markets,”" 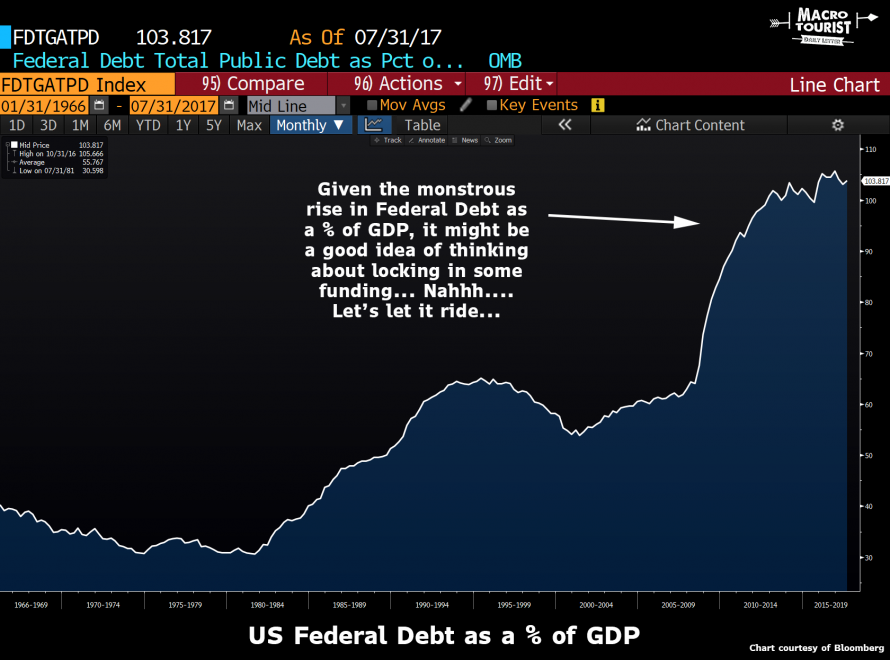 He knows damn well nobody will lend to this borrower except suckers.

There's a clear reason why they are not selling more long dated treasuries (as you can see in the next chart below) - nobody is interested in buying the long-duration,sub-inflation-rate debt coupons of an openly bankrupt nation that has recently passed the Rubicon of 100% Debt-To-GDP and therefore has no mathematical chance of fiscal recovery without total currency collapse.

Perhaps more interesting than why the CEO of an abusive multi-national bank would be lying, is why public officials are actively making the impending fiscal crisis worse by refusing to finance at longer durations while rates are obviously suppressed below the real market clearing rate. This is the national equivalent of putting everything on credit cards at 25% interest, while you refuse to use a home-equity loan offering 4%.

More than half of the US debt is going to have to be rolled over within 6 years and refinanced, in what can mathematically only be a far more hostile future credit market with a far less solvent borrower (the US, 6 years from now.)

Heads should literally be rolling...from the guillotine...where they used to be attached to the heads of corrupt US politicians.

Instead, they try to distract you by launching more illegal wars in the Middle East.

Let's get on that, shall we?

PS - This is why we need immutable block-chain currencies with a ledger that can't be edited, in case you were wondering.

If that happens it will have far reaching consequences not only in the US but in the rest of the world. Surely there should be a remedy for these oversight.

US debt is not hidden from anyone. but when you are in debt, you are safer to default! because China and Japan (major lenders) won't let you down. if US economy fails completely, they will lose a massive money.

I agree cryptos will be hot topic for the times of war, uncertainty and economic turmoils, but I don't think the US gov defaults...

This has been a long time coming. From the beginning of the system there has always been more debt than money in circulation. It's only a matter of time before it all falls apart. I was pretty worried about this before the blockchain came along. Now we have a safety net.

Exactly! We're right where we need to be!

While I do agree with your premise. My question is, what responsibility does the ordinary citizen have in all of this? We know that the Fed is out of their control. But as far as the politicians are concerned. They did not fall from the sky. They did not get into office by a coup. The US, despite its shortcomings, is a democracy. And while their approval rating is so low, the fact is that US citizens vote for them.

One also has to take into consideration the consumerism that is a mainstay of the US culture that is helping to keep the system purring sweetly. And you also mention the army. The 1% is not sending their kids to fight wars.

Again, I agree with pretty much all of what you said, but at some point, should the people not bear some of the responsibility?

It's not a democracy. It's a republic. A corrupt person is always going to get voted in no matter what. If a good person happens to get through and starts making changes they'll be removed or assassinated.

Point taken. But having spoken to people on both the left and the right, they go along with what is given to them. But look for example on the left you had Bernie and you had Jill. You also had libertarian candidates. Now, whether or not you liked their policies at least they were coming with something a bit different and many people rejected them.

Ok so Bernie get's elected. He tries to take away power from the elite and gets murdered like JFK and Julius Caesar. No more Bernie.

Statistically, there is no choice. The politicians are not in control of the system. I live in California. Because of the broken electoral college my vote doesn't count. The democrat wins California every time no matter what.

The Federal Government doesn't control the Federal Reserve. The strings are being pulled from above. It doesn't matter who gets elected. Politics is a distraction.

Point take. And I have had similar concerns. Do you think it is even possible to get rid of the electoral college?
And
Concerning the Feds. How does one even approach that issue? Can anything even be done to the Feds?

The day of reckoning is near. This bloated debt-based economy will no longer be able to sustain itself. I thought it was all going down in flames but perhaps the blockchain can smooth out the transition. That's honestly why I'm here in the cryptospace.

But even though the blockchain is here many are gonna suffer horribly. Some people I reckon are not gonna embrace this solution. But who knows. let's see.

They are equally partners in crime, the days are coming for them to be judged too. Natural Law is fair.

Up until then, we had a naive trust we put in our politicians, media etc...

So equal partner in crime? - gullible maybe, not criminal.

i.e., what goes around comes around?

Lock in some of your purchasing power while you can - gold, silver, Bitcoin (?)

It's unbelievable what they've managed to get away with, treason comes to mind!
This is off-topic but I was wondering if you were going to be wall of coins crypto meet up tonight?

It's not just the US that has this problem. I wrote an entire article on why bitcoin was created, the worlds debt, govt currency and the importance of decentralization. It just happened to be in reference to the Bitcoin -vs- Bitcoin Cash debate...but all those topics are covered. Let me know what you think:
https://steemit.com/bitcoin/@workin2005/bitcoin-btc-vs-bitcoin-cash-bch-the-great-block-size-debate

A individual filling for bankruptcy mean that the government takes control of the your assets and comes to a conclusion rather than continually taking your income to pay your creditors.
No one has the ability to seize the income of the United States. So sure we can decide not to pay. And others can either attack us over it, or refuse to do business with us again.

The house of cards that the monetary system is about to fall, get ready and stack some coins and precious metals :)

We just need to Blockchainize everything !

well said @lexiconical your post is all about facts and truth. i m agree with that.

I think big money will soon start leaving stocks and shares (or mist and mirrors,), and will move into ctypto or metals - and there is a massive problem holding physical metal.

So crypto here they come...

Yep, people so quick to criticise bitcoin yet very few analysts mention the US debt situation. The debt situation is "okay" until one does it's not, much in the same way CDOs were "okay".

I just loved the picture LOL

It will be interesting to see what role the IMF and SDRs play in the next financial crisis since the Fed isn't in a position to bail anyone out.

You said it, now we need crypto more then ever. But with the advent of a possible new economic and monetary system based on ledgers what do you think about changing the society with it as well?

Shouldn't we forget the old monetary systems of capitalism - let us change the concept of work and rewarding the work and start monetizing benevolence and charity - helping each other out. I believe that a completly transperent ledger system that can not be manipulated can be used for tokenizing and monetizing benevolence witch could lead to a different understanding of work and value - If I help others more I will have more.

It's a utopistic idea, but it doesn't have to be unreachable.

Excellent post, the US Dollar is doomed as well and will never see $100 ever again. "Given Jamie Dimon just released another annual shareholder's letter chalk full of lies for his clients," very true the banksters are ripping people off..

I couldn't agree more. The world needs to adjust to accommodate crypto currency. The times for centralization are over! So gelp us God!

US financial system is not only based on economical and technological potential, but also on two other facts:

fiat money that can use QE method and make the inflation currency!!!!! Sometime we forgot about the gold price per food amount is decrease bcuz its not backup with gold or anything but its backup from our trust to government,federal reserve and bank#fed kill me xD

Exchange your US dollar to Crypto and precious metals while you can. The house of cards can collapse at any minute!

It's a scammy situation for sure and how long will it last ? From what I understand people are predicting the dollar collapse for decades and they always say it's near, hedge it with precious metals and now with crypto they say, and one day they will be right but I have no idea when that will be ...I guess it's very complex

I wrote about another 2008 recession coming. Great article. How do you suggest we protect ourselves?

Bitcoin, a magical thing, was not recognized when I touched it. Unfortunately, I didn't realize its value at that time. I now know the blockchain and I am willing to learn about it. One is from China. Novice @chineseman
比特币，一个神奇的东西，我在接触它的时候，它还不被认可，可惜我当时也没有认识到它的价值，现在才知道区块链，也愿意来了解它，一位来自中国的新手@chineseman

The problem is not just the fiat money, it is the actually resources which fiat is a representation of. We are a people so vast in number we need 1.5x earths to sustain us.

Great info!! Thanks for putting this together!
Following you!

You got a 4.29% upvote from @postpromoter courtesy of @lexiconical!

i dont think USD is going down soon. maybe not an 1st choice of foreign exchange but consider bitcoin and altcoin is one of your money safe zone, provided bitcoin stay at high price all the time.