Being a long-standing fan of both video games and animation, a merging of the two formats is always a welcome expectant treat for me. As I've found that, unlike their live action counterparts, video game adaptations within the animated realm, have worked in the past. And rather successfully so, of which some outstanding examples include Street Fighter – The Animated Movie and Batman – Mask of the Phantasm. So, taking such a well-renowned classic as the Dead Space video game, so rich in lore and atmosphere, it also had all the glaring hallmarks to be a runaway hit. Well, seeing as I'm currently doing a play-through of this masterpiece, I thought I'd do a short review of my feelings towards this movie. It must be noted that a sequel was produced, Dead Space – Aftermath, in conjunction with the released of Dead Space 2. However, I will only be referring to the first in the duology, Dead Space – Downfall. 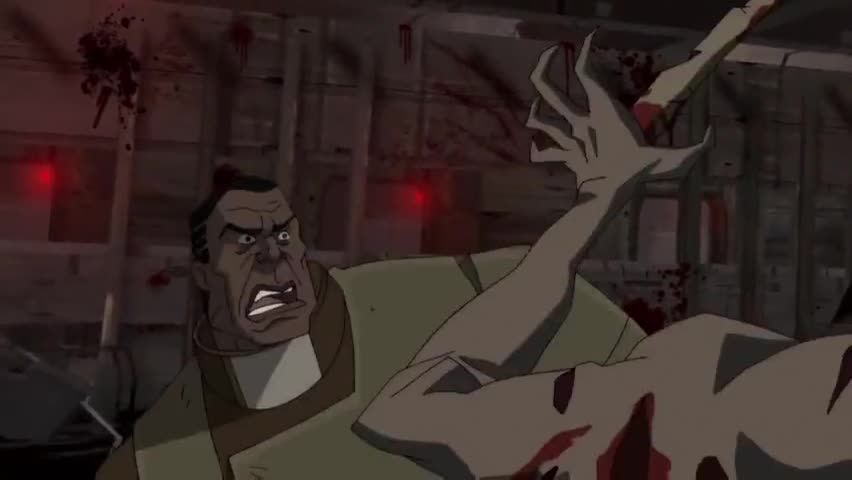 We begin with the discovery of a strange alien artefact, on the planet Aegis VII. A radical, separatist religious sect, going by the name of "The Church of Unitology", want to find out more about this mysterious structure. They charter a ship, the USG Ishimura, to venture out and retrieve the artefact. The ship's crew, headed by Capt. Benjamin Mathius (voiced by Jim Cummings) soon get word of a disturbance within the colonist's group down on the planet surface. Security head Alissa Vincent (voiced by Nika Futterman) expresses concern, but is swiftly cast aside. Upon arrival, the news appears far worse than originally suspected and reports of a widespread massacre, alert the crew. However, adamant that they stick to their specified mission statement, Capt. Mathius orders that they excavate the artefact and return back to Earth. But as the citizens below attempt to flee the unexplained horrors below, a rogue ship manages to crash into the Ishimura and inadvertently unleash whatever evil resides within, onto our oblivious party members.

Now, it could well be that I am biased towards this review, if for nothing else than my utter adoration of the game itself. However, I also know a "bad" video game movie when I see one. This animated spectacle captures the feel and tension of the game, with a stunning flair and finesse. From the dark, foreboding environments to the actual re-created creature manifestations themselves. It is clear to see director Chuck Patton shared the same love of the franchise too. In addition, make no mistake about any fears that they may have held back on the visceral nature of the game. Every bit of terror and blood splattered carnage, is translated into the movie. And expertly so, in that the shots they opt for are mostly from the human's point of view. Moving shadows on the wall, the isolation of our crew as they desperately try to figure a way out of their impending plight. It's a real edge-of-your-seat affair and doesn't allow for a moments boredom throughout. Our main protagonist, Alissa, is a likeable, yet rugged female military leader. Think of Ellen Ripley on steroids! As scared for her safety as that of her fellow companions, you sense the thick dread in the air as they all quickly realise hope is running out for them, all too soon.

Dead Space – Downfall is a classic survival horror, made in the same vein as the Alien movies. I was very impressed by the artwork, animation style employed and the unsettling adult nature of the movie. I have watched it countless times now and enjoy it every bit as much on each subsequent viewing. It's a fast-paced race against the clock in a truly horrifying situation. The voice acting too, is of an extremely high standard and adds volumes to the overall quality of the finished atricle. If you love horror or animation and want to check out something that'll set your pulse racing, I urge you to give Dead Space – Downfall a look see. Coming very highly recommended from me to you.