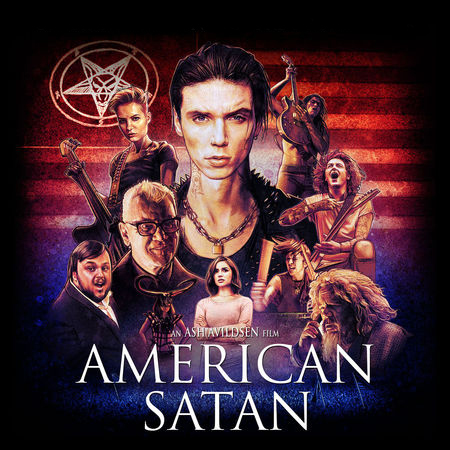 This time I chose the to review and analyze the “Rated R” movie titled “The American Satan”. It’s a movie produced by Sumerian Films(Sumerian Records), actually one of my favorite record labels. The story revolves around a young rock band trying to make their way to the top. They all dropped out of college and went to Hollywood, trying to catch a fortune.

“Perception is not reality. It’s not what you see, it’s what you feel”

(A scene outside a liquor store)

Johnny: A bottle of jack and a bottle of Don Julio
Vic: Yeah, yeah.
Vic: Yes, Sir!
Johnny: (Greeting a black homeless guy outside the liquor store) Hey, how you doing?
Vic: (Talks to Johnny) Keep an Eye on this stuff please.
Johnny: Yup.
Homeless Guy: Hey! Hey! Could you watch my ax too?
Johnny: (CHUCKLES) Sure.
Homeless Guy: What tune you all playing at?
Johnny: Oh, drop D.
Homeless Guy: Drop D. I got it, okay. Okay.
Johnny: All right. Let’s do it. Wait, we gotta wait for this fucking guy with his guitar.
Vic: No shit, we’re waiting for him?
Johnny: I don’t know where he is. I can’t leave his shit.
Johnny: It took you that long to find booze? And an apple?
Homeless Guy: Boy, I don’t waste my time with that poison. You think I collect bottles and cans all day so I can buy some liquor?
(Johnny attempting to check the hobo’s stuff)
Homeless Guy: Hey, hey, hey.
Johnny: I’m just checking.
(Johnny, only found some basic commodities and some fruits inside the bag from the liquor store)
Johnny: alright
Homeless Guy: Kid, perception is not reality. It’s what you feel, not what you see.
Vic: Sorry man, we didn’t mean to judge you.
Homeless Man: Don’t get caught inside the hollow wood. What you feel!
Johnny: Yeah.
Homeless Guy: What you feel.
Johnny: Got it. Feeling it.
Vic: Alright kid, let’s get out.

It was one of the best scenes in the whole movie, in my opinion. I realized that simply by acting impulsively towards strangers, we tend to unconsciously judge a person by our general impression towards him/her.

According to an interview by Sam Rivman of the The Huffington post;

Sam: What is the film's plot rooted in? Is this someone's personal experience?
Ash Avildsen: With the exception of the physical manifestation of Satan, everything in the film is based on real events. Either myself, or these guys, or the producers have had these experiences in the rock music scene. It didn't take that much crazy imagination, even though when people see it they'll say “how did they think of that?”. Specifically when it comes to rock music craziness, truth is usually pretty important.
Ben Bruce: It's a pretty accurate metaphor I think, the devil and selling your soul.
Andy Biersack: Personally, my character in the movie is from the Midwest and goes out to L.A to be a big rock star. In that regard it's very similar to my own life. I grew up in Cincinnati, Ohio and left to make it in the rock world. The difference is I didn't make a deal with a deity. When there's so many divergences in paths that you can take to success, I think without a doubt you lose a part of yourself in those early years. You can sometimes forget where you came from initially, and the characters in this movie are right in that stage where they've given everything to become rock stars and they've been given the opportunity to get a shortcut. Hard work pays off, but I don't know what I would have done if I had the chance to become very successful out of nowhere. When you're hungry and you want nothing more than to have that success, who knows what you would do if someone presented you with the keys to the kingdom?
Ben Bruce: You're very much thrown into the deep end quickly and you either learn to swim or it does consume you. Over the years there have been countless iconic rock and roll films, but the characters were all actors. I think one of the wonderful things about this film, that we're all musicians. We have lived this life, we have been through it, so when you watch this film its a unique perspective.
Sam: What would you say are some of the musical influences for the film? Tell me about some of the composition.
Ash Avildsen: Once the band explodes, I wanted to have the music sound like what a big band might sound like today. There are a lot of bands on rock radio right now that are imitating the greats.
Ben Bruce: (to Ash) It would have been really easy for you to go down that route and pick some old hits, but you didn't do that.
Ash Avildsen: I wanted to be like “Okay, what if Tool was a more mainstream heavy metal band with more raspy punk vocals?”. So I strayed away from having the band sound classic rock, I wanted it to sound modern and relevant. We weren't ambiguous with the time frame. A lot of movies wont tell you the time frame, “It Follows” did a really good job with that. We wanted to make it clear that this was present day.
Andy Biersack: The truth is for us, as career musicians emulating these musicians playing these songs, one of the coolest things for me and I think for Ben as well is that these are not our bands. We got to be these other people with this other sound, and that was a great way to get lost in the character. It didn't feel like this is what we had done everyday for the last decade.
Ben Bruce: I did an interview not too long ago where they asked about that, and the craziest thing about this for me is I'm not necessarily in the place that my character portrays in the movie anymore. It really did take me back, the movie for me was very nostalgic. It made me look at how I was when I was young and think “I can't believe the place that you've come to in your life and the person you've become”. Because it did feel very familiar, and its scary.
Sam: What are some of the directorial influences in the movie? What works did you study while making “American Satan”?
Ash Avildsen: This is really a coming of age story, and one film I loved growing up was “Dazed and Confused”. That doesn't get too dark, but if it got way more gnarly that would be similar. As far as music film influences go, “The Doors” is really the best one. There's another film called “Sing Street” that we looked at, I thought “Straight out of Compton” did an excellent job. I really wanted the audience to be along for the ride, feeling like the sixth member of the band.
Sam: What do you want your audience to be thinking after they see this film?
Ben Bruce: There's the age old thing of people saying “Ah, you've got the best job in the world!”. This movie just shows that isn't factual, that's not the case. We love our jobs, we have a great time, but there's so much that goes into it, so many things that can drag you down as a person. I want people to step away from this movie and say “I get it”.
Andy Biersack: One of the things that I'm most struck by and that I hope people will see is that people can change. When you're young and living fast, whether or not its rock music, you might do things before you're able to put real thought into who you're going to be. I think that by the end of this film, Johnny is ready for change and the next chapter of his life. I hope that if nothing else, maybe some young people that see this who are going through something similar see that it's okay to grow and change.
Ben Bruce: You're not destined to live a life of your past, and that speaks loudly in this film.

Another plot in the film that actually influenced my thoughts towards “Bullying” and made realize how ineffective our campaigns and advocacy have become. This film represented incidents of bullying wherein the person’s which were bullied seemingly took a stand against the bullies and ended up killing the bullies. The killing incidents initiated a massive drop in cases of teenage-suicide and bullying.

In a mass media perspective, the scene could be strongly influential and life changing. It features violence and generally the darker side of life, which is actually beneficial for everyone in my opinion. It suggests diverse and experimental yet interesting ways in dealing with life in general.

Hi! I am a donkey. I just upvoted you! Nice work baby boi!