Sometime I wonder, I really do wonder...

I'm not even gonna say anything. 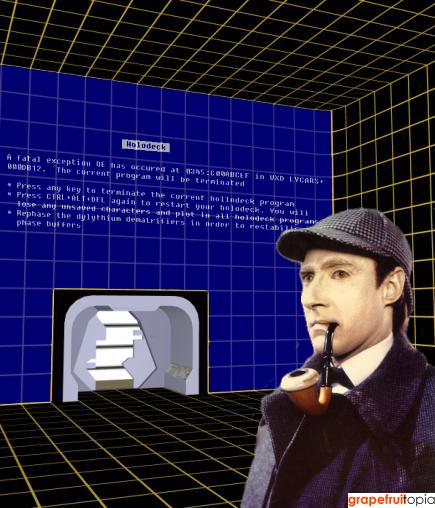 Have you ever heard the theory that sometimes the biggest secrets get exposed right to your face in a way that you just ignore or don't believe...

Ya... Really listen to the words he is rambling off...

A reverse reality simulator... If you break it down.

Why is it a common theme on TV to joke about these things???
And in a way that goes over the heads of the actors even...

Don't forget you are watching TruTV too :P lol

But in essence that is what the show is doing... messing with the Matrix... If you view the show from my AI in a Matrix POV... I refer to jokes like this one as the system bucking back :P It's almost like a chilling but subtle scare you tactic to calm you down. Don't get any big ideas, leave this to the professionals! :P Kinda makes you think about CERN and the worldwide network of particle colliders they have created... and the addition of quantum computers and entangled light networking... hmmm...

The ATLAS Machine at CERN

And remember, Just like NanoCheeZe, Do it with a Z! :P

Reading this post exposes my mind to new fact i never knew, weldone.

The Higgs Boson particle, and Hadron Collider was just a topic of discussion I had with a family member today. Perhaps it's only a gut feeling I have, but I think we will hear more about this in the near future.

The LHC's computing grid is a world record holder. Data from collisions were produced at an unprecedented rate for the time of first collisions, tens of petabytes per year, a major challenge at the time, to be analysed by a grid-based computer network infrastructure connecting 170 computing centres in 42 countries as of 2017 A Feynman diagram of one way the Higgs boson may be produced at the LHC. Here, two quarks each emit a W or Z boson, which combine to make a neutral Higgs.

The LHC Computing Grid was constructed as part of the LHC design, to handle the massive amounts of data expected for its collisions. It is an international collaborative project that consists of a grid-based computer network infrastructure initially connecting 140 computing centres in 35 countries (over 170 in 36 countries as of 2012). It was designed by CERN to handle the significant volume of data produced by LHC experiments, incorporating both private fibre optic cable links and existing high-speed portions of the public Internet to enable data transfer from CERN to academic institutions around the world. The Open Science Grid is used as the primary infrastructure in the United States, and also as part of an interoperable federation with the LHC Computing Grid.

This information is referenced from https://en.wikipedia.org/wiki/Large_Hadron_Collider

Where are we going with all of this? I really do not know. I am not even sure the scientists behind this know fully. I know that they have been working on this for a very long time, and you would think it would be a topic of discussion amongst the general population, but it is not. Most people I speak with have never even heard of this project. Nice article @nanocheeze