adventureevryday (64)in #nature • 3 years ago

When I came to Norway, I had this vague idea that I wanted to really get in touch with my outdoor adventure side. In fact, nature was a big factor in the decision. I didn’t know exactly how I’d do it, but that question was answered a mere two weeks in when I met my good friend @janoliverkoch.

I have him to thank for getting me to the great outdoors, and now its my turn to bring him into the adventurous world of Steemit! 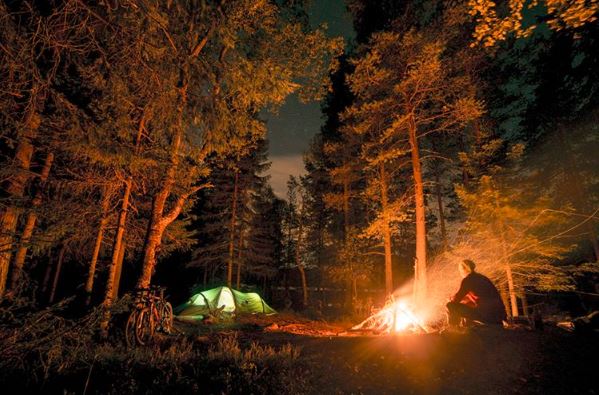 That picture there, the one right above this, that's about what this vague idea in my head looked like if I were to draw it out. Biking out to the woods, sitting around the toasty campfire under the clear night sky, cozy tent ready for when the last bite of chocolate is finally gone.

Looks like something out of Stranger Things, doesn't it? But it was actually just me and Oli on our first camping adventure, only a few short weeks after I first arrived in Norway over 2 years ago. It was also the very beginnings of how this whole Adventure Every Day thing came to be in the first place.

Back then, I didn't even own a camera, and I was highly averse to social media. But here I saw for the first time the power of what a mere mortal can achieve with a camera (a fancy one albeit), the way it can capture a moment, and the power of the internet to do something even more with that.

As time went by, there were more adventures. Hiking. Canoeing. I got my first GoPro that Christmas. Snow shoeing. Then our biggest adventure yet, all weekend camping in the snowy Norwegian forest north of Oslo. It was a tough challenge, but an epic campsite and technique for building a fire in the snow resulted:

Oli had an idea of making a tour company "Out of Oslo" to take people on trips like this, so this was something of a test. That didn't quite happen, but the inspiration kept coming through the lens of Oli's camera - just check out his blog @janoliverkoch to see what I'm talking about.

It was on yet another excursion into the woods that a new idea came up. If photography is that fun, how about getting more serious about video? This was sort of a watershed moment for me, where I began to see my new hobby in a different way. YouTube was all the rage at the time of course, so we thought we might as well give it a go.

It was at that time that I first heard of Steemit.

It was by chance, just a comment from a colleague who heard of our idea and suggested to check it out. I knew pretty quickly this would be the place where we'd achieve something, if we were to achieve anything at all.

Our grand vision may not have played out exactly as we expected, but I sure am glad I found Steemit in the process and stuck with it, and that my good friend who started this with me has joined at long last! To you Oli, I wish to say thanks for the inspiration, thanks for your adventurous spirit, thanks for the memories. You always encourage to follow your dreams, and because of that my Norwegian dream has been a very exciting and memorable one.

I'm excited for you to take off on Steemit, and I'm looking forward to many more memories like this one here on future winter camping trips.

Photo credits here go to the subject of this post @janoliverkoch. If you want to welcome him to Steemit and see much more amazing photos like these, be sure to check out his blog and show some love!

Adventure Every Day started as a dream by two expats lost in Norway - that's right, me and @janoliverkoch. It never amounted to much more than that, but the spirit lives on in our sporadic adventures. Keep adventuring my friends!

The time lapse you did is great. Never stop exploring! I am off to check out @janoliverkoch blog now.

Thanks a ton my friend, I really appreciate your support and encouragement!

adventures were memorable, unfortunately we did not feel the snowy winter

Haha thanks man, probably for the best that you didn't have to get so cold.

as in Indonesia, we only have summer temperatures 26-34 C. the incidence of 2 weeks ago the temperature dropped to 18 C. like feeling very cold.

Oh no 18C! I can imagine that must have felt cold to you, but I think I've experienced temps down to -18C here! I'd take +18C over that any day haha.

as usual during the day temperature in the city of Palembang ranged between 32-33 C. so to feel the 18 C temperature was cold.
I can not imagine what if it was at -18C, I can die standing hahaha

thanks to: @adventureevryday.
For more information, click here!!!!
Send minimum 0.100 SBD to bid for votes.

Congratulations! This post has been upvoted from the communal account, @minnowsupport, by adventureevryday from the Minnow Support Project. It's a witness project run by aggroed, ausbitbank, teamsteem, theprophet0, someguy123, neoxian, followbtcnews, and netuoso. The goal is to help Steemit grow by supporting Minnows. Please find us at the Peace, Abundance, and Liberty Network (PALnet) Discord Channel. It's a completely public and open space to all members of the Steemit community who voluntarily choose to be there.