Our planet can surprise us with its geological wonders, whether they have taken millions of years to form, or just minutes. Here are some striking examples ...

Richat, the eye of Africa 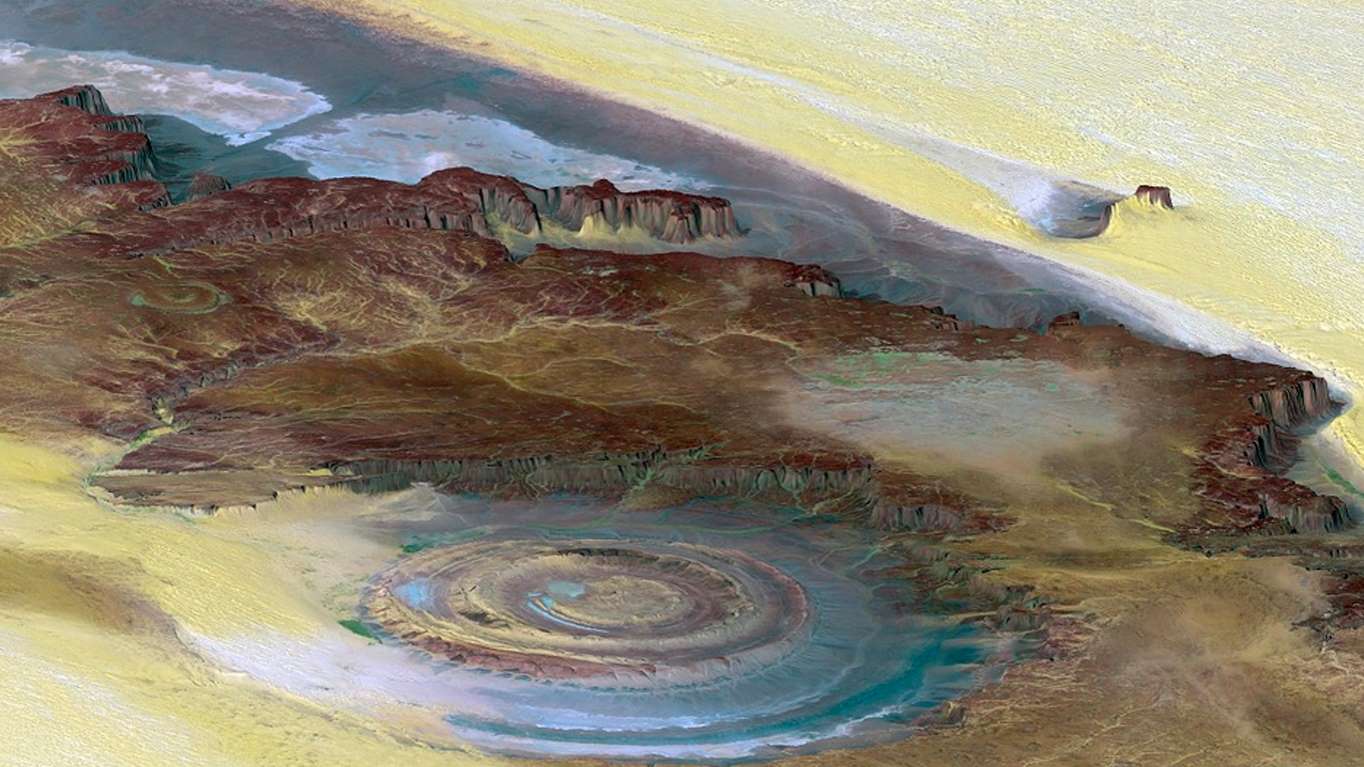 © Pixabay
Only astronauts have the privilege of being able to observe this huge circular depression in the Sahara desert in Mauritania. It is only from space that we can see these three nested rings with a diameter of more than 40 kilometers.
At the heart of these three rocky plateaus lies a gigantic breach of crushed rocks over 1.5 kilometers wide ... result of a volcanic episode extremely rare before our era.

The crater of Darvaza © Shutterstock
Hell exists and its door is in Turkmenistan, in western Asia. First observed in 1971, this crater is a natural gas field that has been burning continuously for more than 40 years in the heart of the Karakum desert.
What was an important oil field turned into hell when a borehole went wrong ... releasing the ignited gas and letting the ground collapse.

The giant hole of Guatemala 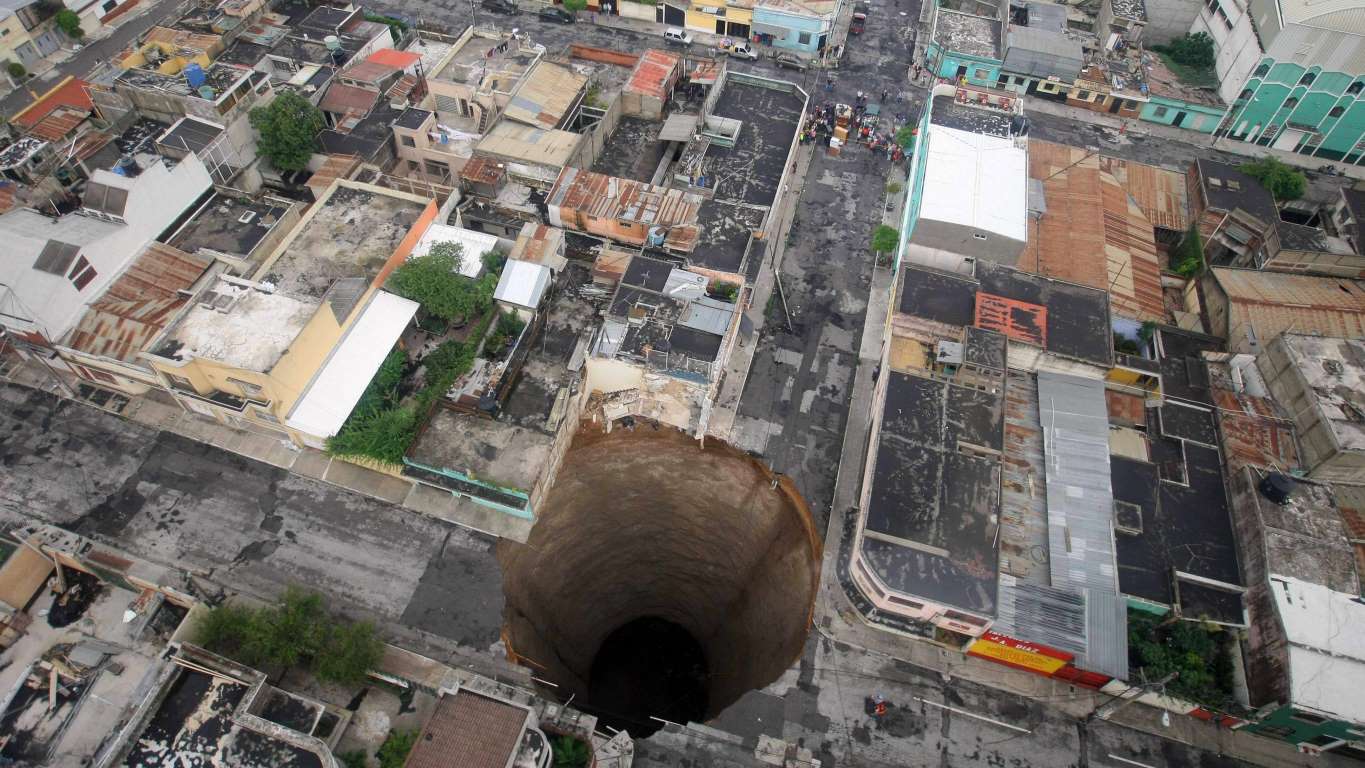 © AP Photo
In June 2010, three days after tropical storm Agatha passed, a giant 20-meter-diameter hole formed and transformed downtown Guatemala City, Guatemala City.
The chasm engulfed a three-storey building and an entire crossroads, which disappeared at a depth of 30 meters. The cause ? Probably the torrential rains that ravished the subsoil and caused this landslide.

Ogasawara: an island is born © AP Photo / Kyodo News
On November 20, 2013, in the middle of an archipelago of volcanic islands in the Pacific Ocean, 1,000 kilometers from Tokyo, a new island appeared. Continuing to grow, she ended up absorbing a nearby island.
This spectacular and extremely rare phenomenon was caused by an underwater volcanic eruption. This type of island can disappear as quickly as it occurs.

The abyssal crater of Siberia 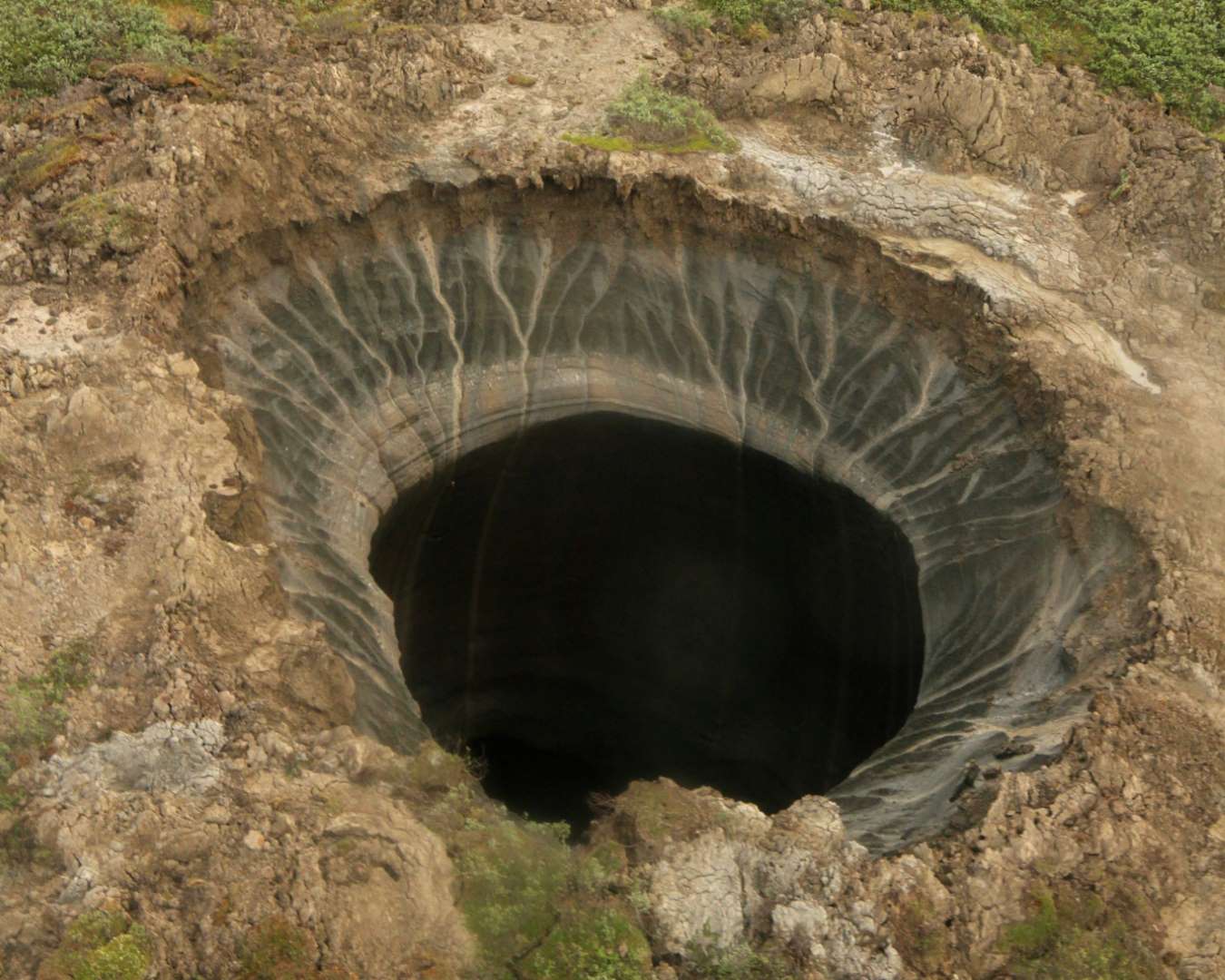 © AP Photo / Press Service of the Yamalo-Nenets Autonomous Okrug Governor
In July 2014, a giant crater 80 meters in diameter was discovered in the Yamal Peninsula, a low-traffic area of ​​Siberia. Its formation is due to global warming which, by transforming the permafrost, would have resulted in the release of gas.
If this explanation is confirmed, we can expect a multiplication of such craters in this region of the planet.

The appearance of Lake Gafsa © Photo Twitter: PhilipAllanEvts Geo
In the desert of Tunisia, near the town of Gafsa, a lake with a surface of more than one hectare appeared in 2003. This lake of a depth of 20 meters was nicknamed Gafsa Beach by the inhabitants of the region. Its origin has not yet been explained by scientists.

Stones that roll ... in the valley of Death 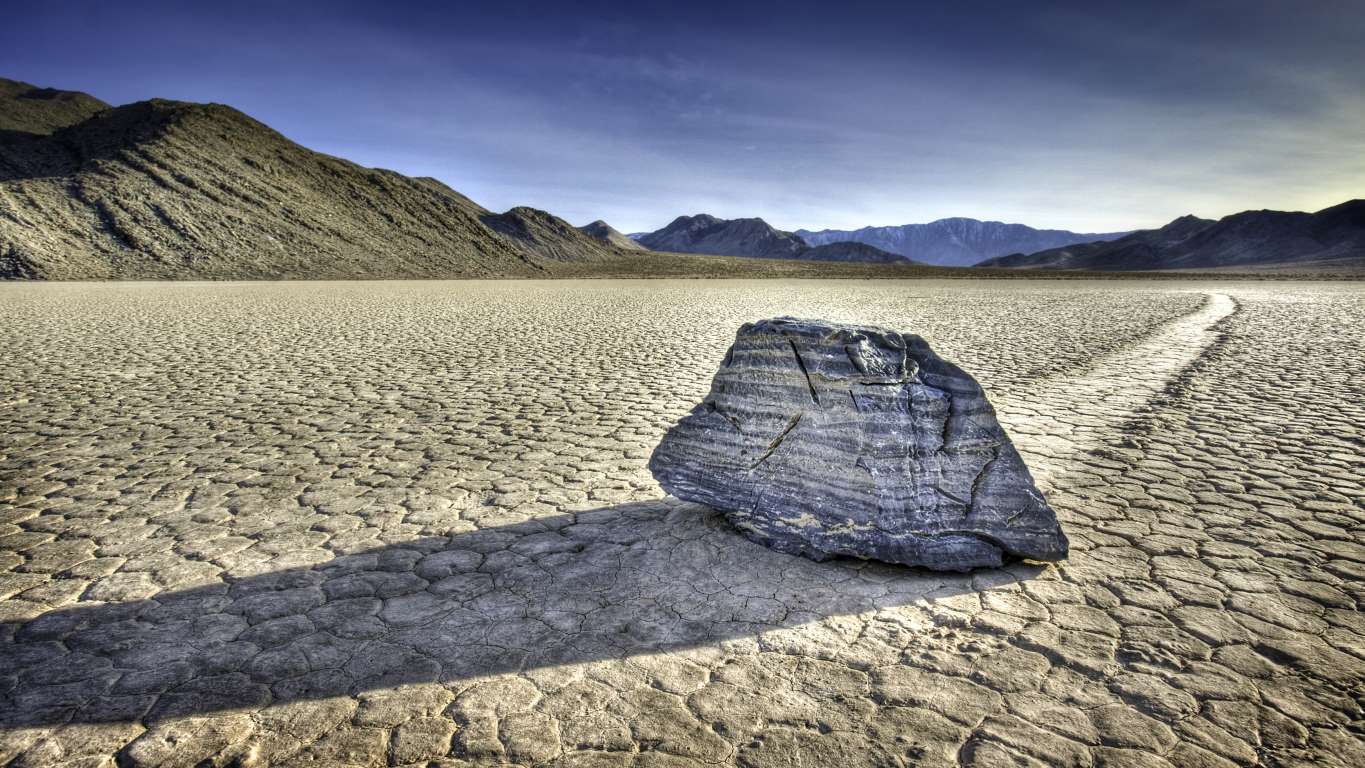 © Photo Shutterstock
In California, strange furrows show the displacement of heavy stones on flat surfaces of the Valley of Death. This geological phenomenon is due neither to any human intervention, nor to that of animals. Scientists are trying to understand what particular conditions can cause these displacements.

The round rocks of New Zealand © Shutterstock Photo
Stranded on the beach in Koekohe, New Zealand, sediments gradually turned into amazing spheres after a journey of tens of thousands of years on the ocean floor. Like a game of balls for giants, the Moeraki Boulders offer a singular landscape and inspire visual artists. 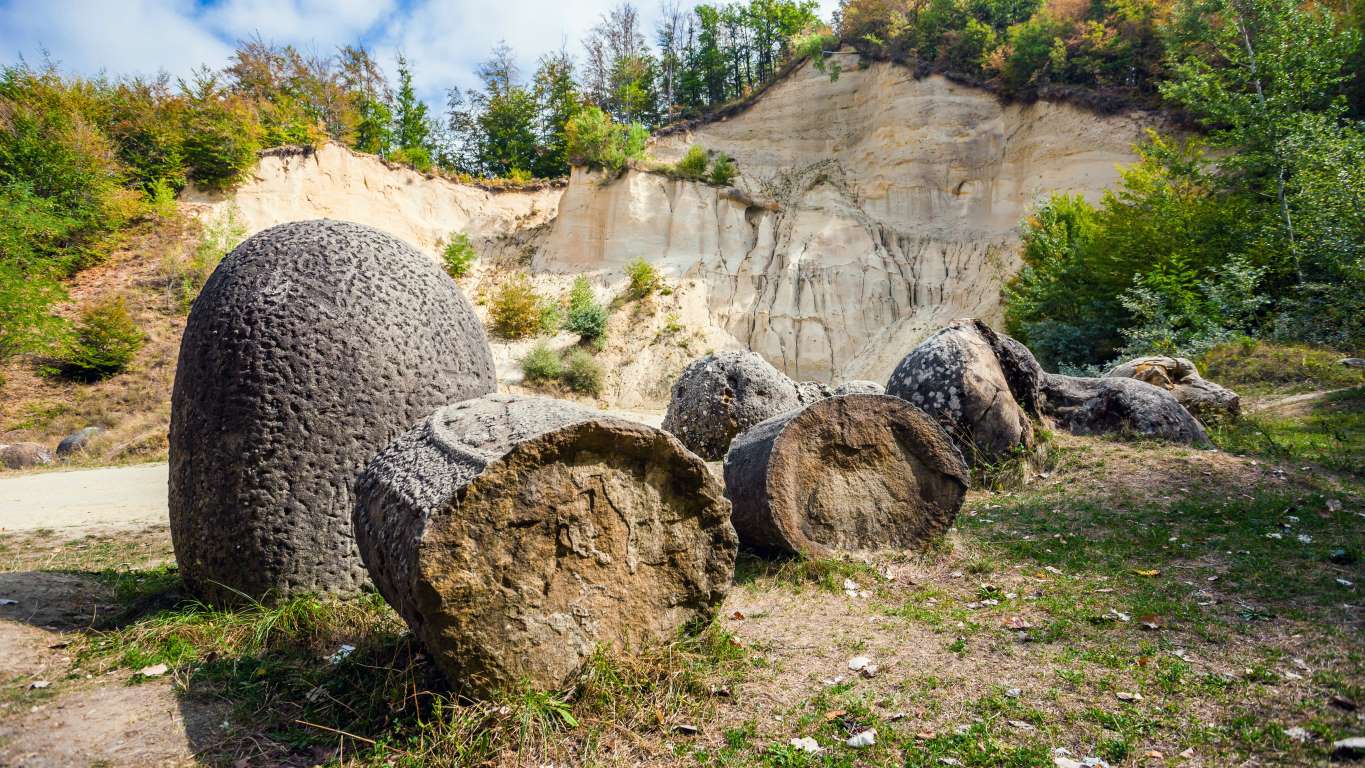 © Shutterstock Photo
In Romania, there are stones, called trovants, which literally grow in the heart of a nature reserve. Formed for five million years, these stones can grow gram per gram, to reach a weight greater than one ton. They can even multiply.

The colorful fairy of Danxia © Shutterstock Photo
In China, in Gansu province, the rock can make you see all the colors. There are colorful rock formations, unique in the world, which are the result of the accumulation of sediment layers during 24 million years. The sumptuous contrasts offer an incredible range of bright colors.

The pavement of Tasmania 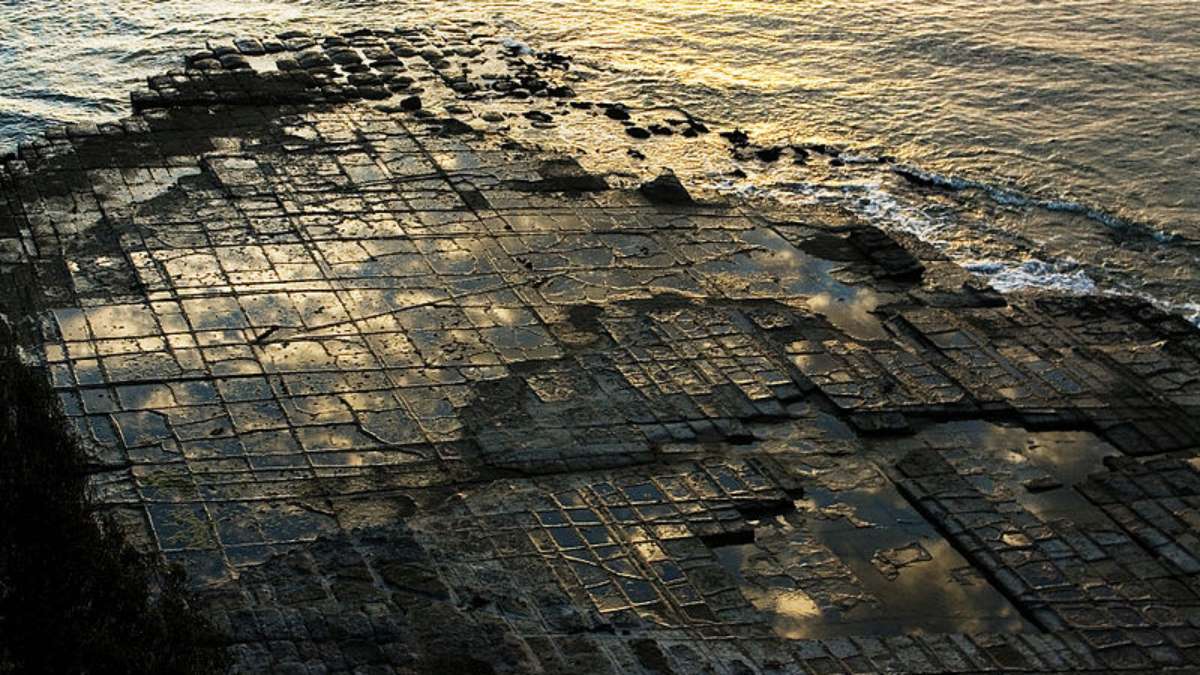 © Photo cc JJ Harrison / Wikimedia
The Tasmanian pavement, visible from Eaglehawk Neck, offers the view of an incredible tiled beach. Surprisingly regular, the mosaic-like pavers were not created by the hand of Man, contrary to what their geometric regularity might suggest. Nature did her work alone, as if she had built a terrace with sea view for a giant.

The marble bridges of Bulgaria © Shutterstock Photo
In Bulgaria, they are called the marvelous bridges: they are rocky phenomena testifying to the exceptional power of the water, determined to pass through the rock. Over the millennia, the water has dug a cave, showing marble bridges. The largest of them stretches 96 meters long and 15 meters wide. It overlooks a chasm high as a 15-storey building. 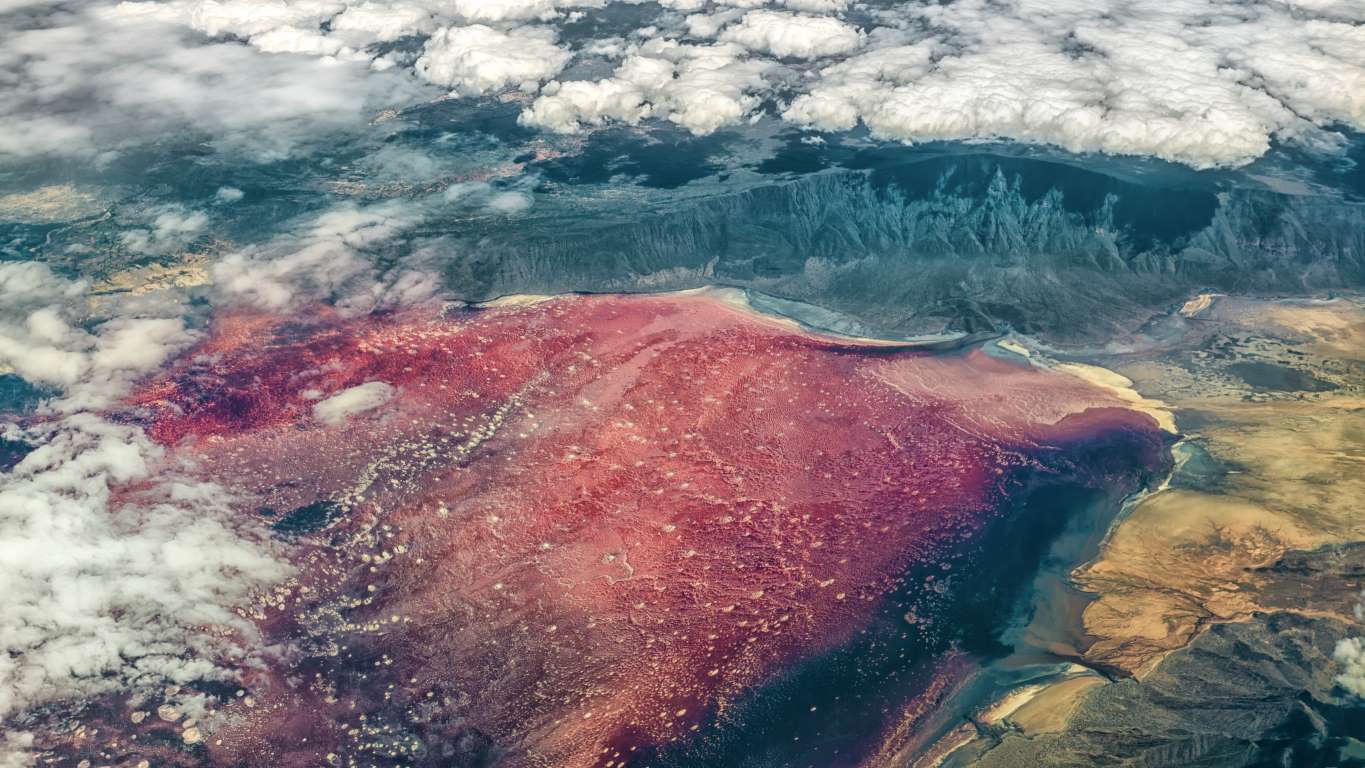 © Shutterstock Photo
Lake Natron in northern Tanzania is particularly rich in mineral salts and baking soda. This very special atmosphere allows only a few rare species to survive there. Those who ventured there by mistake ... stay there for good, literally calcified. © Shutterstock Photo
In Abraham Lake, Alberta, bubble columns trapped in the ice are released in the spring with melting ice. Charged with methane, the bubbles can turn these columns of ice into flaming torches in an instant, once summer has arrived. The releases of methane are then permanent. 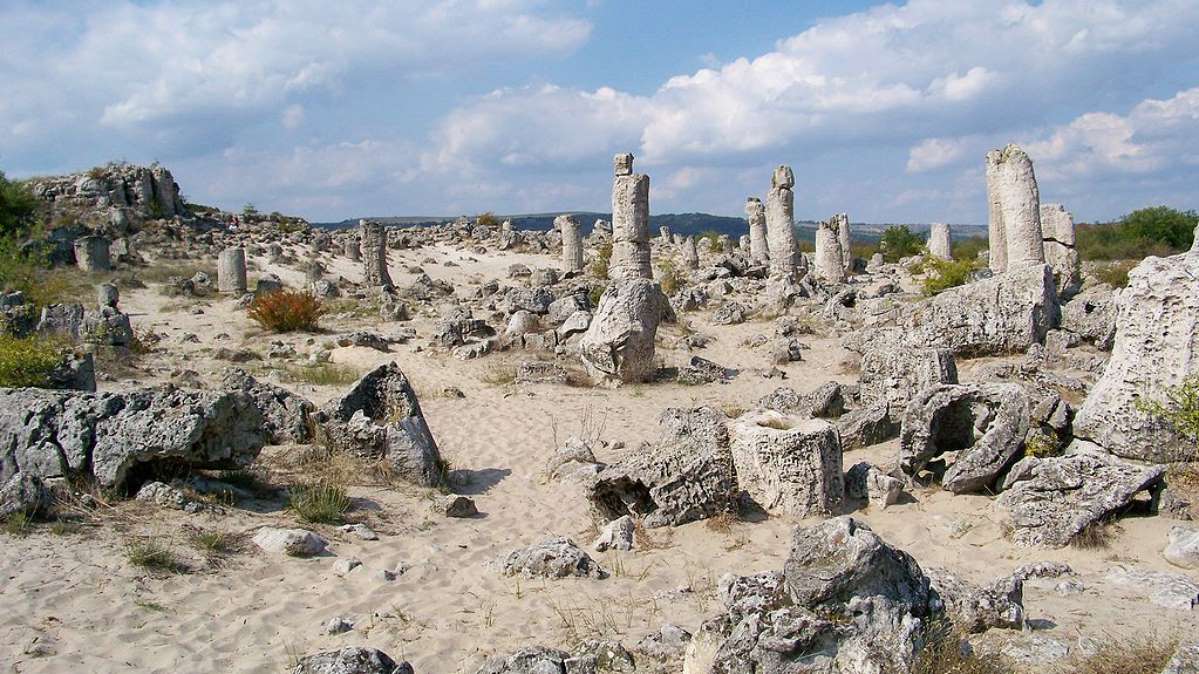 © Photo www.vacacionesbulgaria.com (free documentation)
Pobitite Kamani in Bulgaria is an unusual rock forest that stands in columns up to six meters high. This 70-square-kilometer mineral forest is composed of stones planted in the soil for 50 million years.

Liquefaction of the soil © AP Photo / Kyodo News, Susumu Yasuda of Tokyo Denki University
During a major earthquake, as was the case on March 11, 2011 in Japan, it may happen that the ground opens and closes for a few moments, as if the land began to breathe. In fact, the soil saturated with water loses its lift. Suddenly, the rock becomes loose. 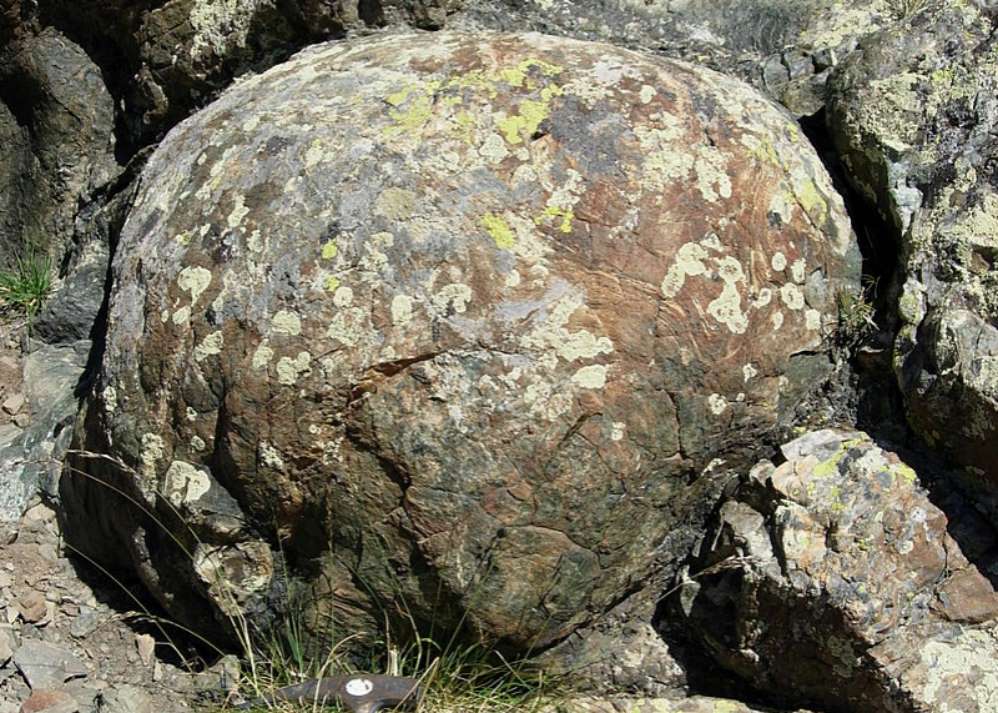 © Photo Saphon A. on Wikimedia
Pillow lavas form underwater, mainly at the ocean ridges. It is found near Hawaii. This is the lava that solidifies in water and takes a spherical shape. During this transformation, the magma is covered with a layer of glass. Some glass cushions can be seen in Hawaii, Iceland and the Alps.

The giant crystals mine © Photo Alexander Van Driessche on Wikimedia
The lead, zinc and silver mine in Naique, Mexico, contains one of the most beautiful underground wonders on the planet. Its cave contains selenite gypsum crystals, the largest in the world. The cavity was only discovered in 1999.

The lake with holes 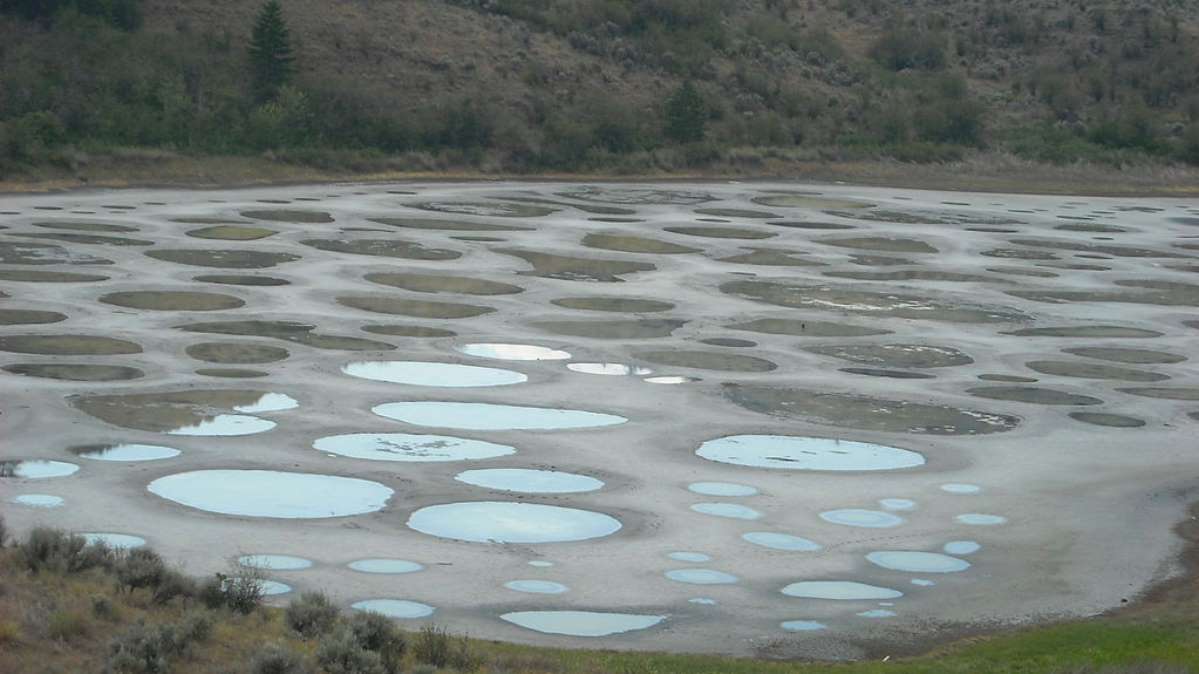 © Photo of Andrew Enns on Wikipedia
Spotted Lake, located in British Columbia, has the singularity of being a lake with ... holes. Nestled in a semi-arid region, this lake is considered to be the warmest in Canada. While evaporating, it offers an astonishing landscape, composed of a multitude of small lakes of all colors, whose hues vary according to the mineralization of the water.