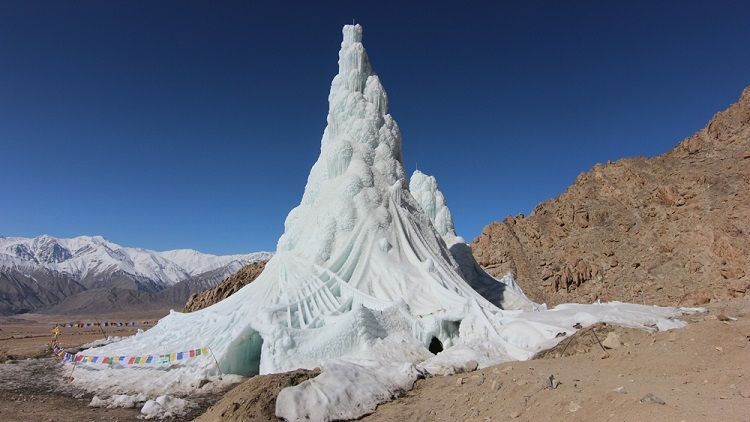 The idea behind artificial glaciers is to freeze and hold the water that keeps flowing and wasting away down the streams and into the rivers throughout the winter. Instead, this ice will melt in the springtime, just when the fields need watering. The concept of artificial glaciers is not new to Ladakh. Our ancestors used to have a process of ‘grafting glaciers' in the very high reaches of mountains.
However, since these are based on horizontal ice formation, they need very high altitude locations (above 4,000m), constant maintenance and a north-facing valley to shade the ice from the spring sun. Seeing these problems and after discussions with Mr Norphel Sonam Wangchuk started working on a new approach in which the glaciers would be free of location, frequent maintenance and shading requirement etc.
In the new model, this is achieved by freezing the stream water vertically in the form of huge ice towers or cones of 30 to 50m height that look very similar to the local sacred mud structures called Stupa or Chorten. These ice mountains can be built right next to the village itself where the water is needed. Very little effort or investment would be needed except for laying one underground pipeline from a higher point on the stream to the outskirts of the village. Normally the head difference is easily 100m over a distance of roughly one to three kilometers.
In the month of May, Sonam Wangchuk noticed the ice under a bridge. Despite summer and lowest elevation in Ladakh, the ice had not melted since it was not under direct sunlight. Wangchuk realized ice could last longer in Ladakh if it could be shaded from the sun. Since providing shade to larger water bodies was not possible, Wangchuk thought of freezing and storing water in the shape of a cone that offers minimum surface area to the sun whilst holding high volume of water.
Sonam Wangchuk In October 2013, Sonam Wangchuk created the first prototype of 6 metres (20 ft) Ice Stupa by freezing 150,000 l (40,000 US gal) in Leh without any shade from the sun. Water was piped from upstream using gravity. Electricity or machinery was not used for pumping water. The Ice Stupa did not melt fully till 18 May 2014, even when the temperature was above 20 °C

Been to leh several times but never had such basic information. I had posted a few photos from my ladakh visit over the years. Check them here and give your feedback: https://steemit.com/adventure/@thenomadictales/travel-tales-from-ladakh-teaser