Living in Luxury Off the Grid - Bird Brained Gangsta Life

Some birds sing, some birds dance.

Woodpeckers pound hard enough to wake the dead, carefully calculating to start long before you have to get up in the morning.

It defines their territory. It’s just what they do. Flickers are the most common kind of woodpecker we have here. 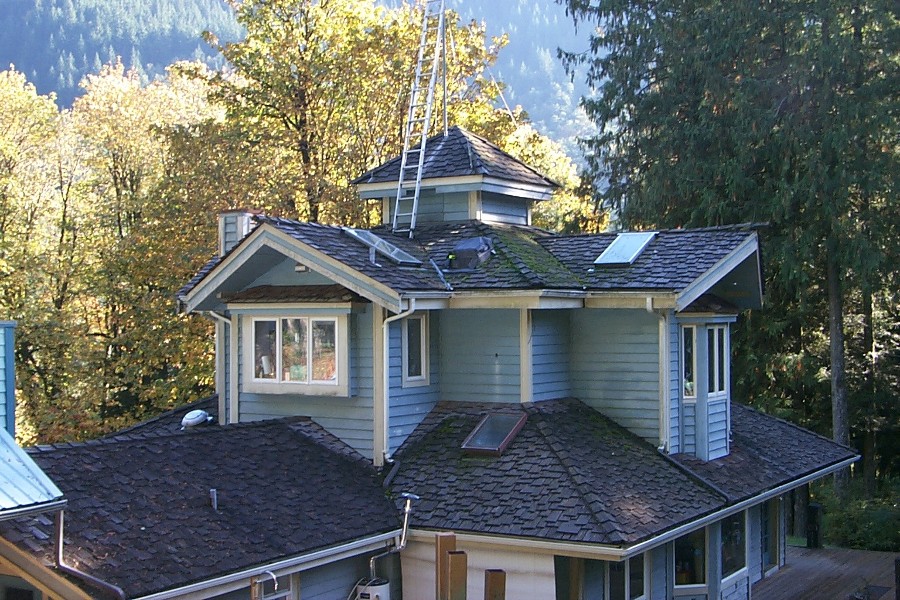 Back when we were in the midst of trying to get telephone service by raising a transmitter-receiver we had put a ladder up on the highest point on the roof against the prospective radio pole. It was mid-spring and like many people who live out in the boonies and who don’t watch enough TV, we had just put out the birdfeeders. Migrating birds, tired and newly returned dropped in to nosh.

Flickers were one of the birds to show up. People in town were complaining about a flicker who was pounding on the stop sign across from the general store. It was easily heard it all over town. We were fortunate enough to have our own flicker who liked to pound on the ladder standing on the roof right over our bedroom.

It liked to wake us up just before the crack of dawn every morning. I did all my internet research, contacted local animal wildlife places, and wandered through the library and bookstore. I couldn’t find even one suggestion for a way to get rid of it. In desperation I went with the old saying, “if you can’t beat them, join them.” I tried bribing it to do something different while it was up there. Early the next morning we woke up to a rasping angry yell. Again and again something screamed it’s challenge - you would think that there was a huge crowd out doing battle. 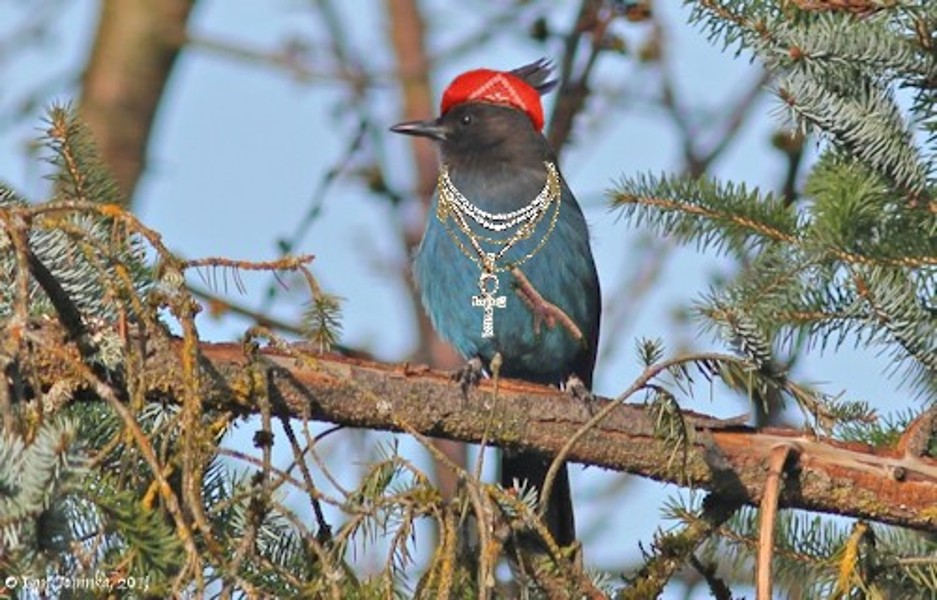 I ran outside and looked up at the roof top. It seems that the suet I put out to distract the woodpecker was also ambrosia to (skylar) blue jays. One of them had found the food cage and had rounded up a few of his best homies. Now they were taking over the territory. We occasionally heard the woodpecker hammering away and laughing farther into the woods but we never heard it around the house again that year or since.

In the end I accidentally found the natural way to rid my roof of woodpeckers however dear Bliss, our ditzie Border Collie has decided that jays are the enemy and they must be barked at and chased even if they can never be caught.

Even if it’s way-too-early-o’clock in the morning. (sigh!) Photos are either mine or are can be clicked on to go to source.
Read on at: That bird was so frustrating. I can't believe that no one else has neither needed nor found a solution to that problem and my luck in finding one that was so unlikely!
It's so fun that you have a woodpecker too! I admit, I do enjoy seeing the wildlife come back in the spring and the ones that are more unique are my favorites.

Another firm example of 'the law of unintended consequence'. That's funny.

We get migratory flickers in the fall and spring here. I heard one drumming yesterday (thankfully not on my house). I have seen flocks of flickers that would darken the sky in your part of the world, I can imagine the noise factor.

My dog rightly thinks white wing doves are the enemy. It's breeding season and the symphony is pretty brutal. Coo coo coo is nice when there is one, but hundreds? Not so much.

Thanks for a wonderful story.

I can only imagine. The doves don't really stop with the noise do they? Other birds tend to call for specific reasons but if I understand it, doves just like to hear themselves talk. I really appreciate that by the time the birds get up here they've mostly scattered and have broken off along the way from the huge migratory flocks.

hello my friend @re-engineer i'm new to your blog and new joining steemit, Really your birds photography is awesome, thank you for sharing with us,

keep it us, this's good work

Thank you and welcome to steemit!

Thank you so much for using our service!

You just received 13.28% upvote from @onlyprofitbot courtesy of @re-engineer!

This comment has received a 11.28 % upvote from @chronocrypto thanks to: @re-engineer.

Very good I like your post much the birds and precisely you speak about the bird carpenter and I have one here in the house living in a trunk and every day I listen to it to hammer with his strong beak, the sound relaxes me and I it like to look indeed that I liked very much at your history carpenter brings over of the bird.

It is so fun that this kind of bird lives in so many places in the world. You can see the other reply I got from a lady in France? She has a picture of a green woodpecker from her yard. I like the bird's voice. To me it sounds like laughing. My husband and I were putting a roof on a small building for our power generator and my husband heard the bird laughing and he was worried that there was someone in the forest watching us! It was funny but it makes me happy every time I hear it.

I grew up on a farm in Southern Ontario and know all too well the different wake up calls! Here in Mexico, there's a type of bird (don't know what they are but I think of them as Mexico's version of the crow/raven), that wakes us up early every morning! I've taken to playing spa music in my headphones at night! And your' comments about your dog made me laugh...my sister had a crazy, ditzie Border Collie...I totally get it :)

The jays are totally comparable with crows!

This post has received a 8.71% upvote from @aksdwi thanks to: @re-engineer.

Congratulations @re-engineer! You have received a personal award!

Just realized we hadn't heard from you in moths! Everything okay? How's the homestead?