NEX - A Neo-Based DEX With A Super-Hype Train (That You Can't Have!) 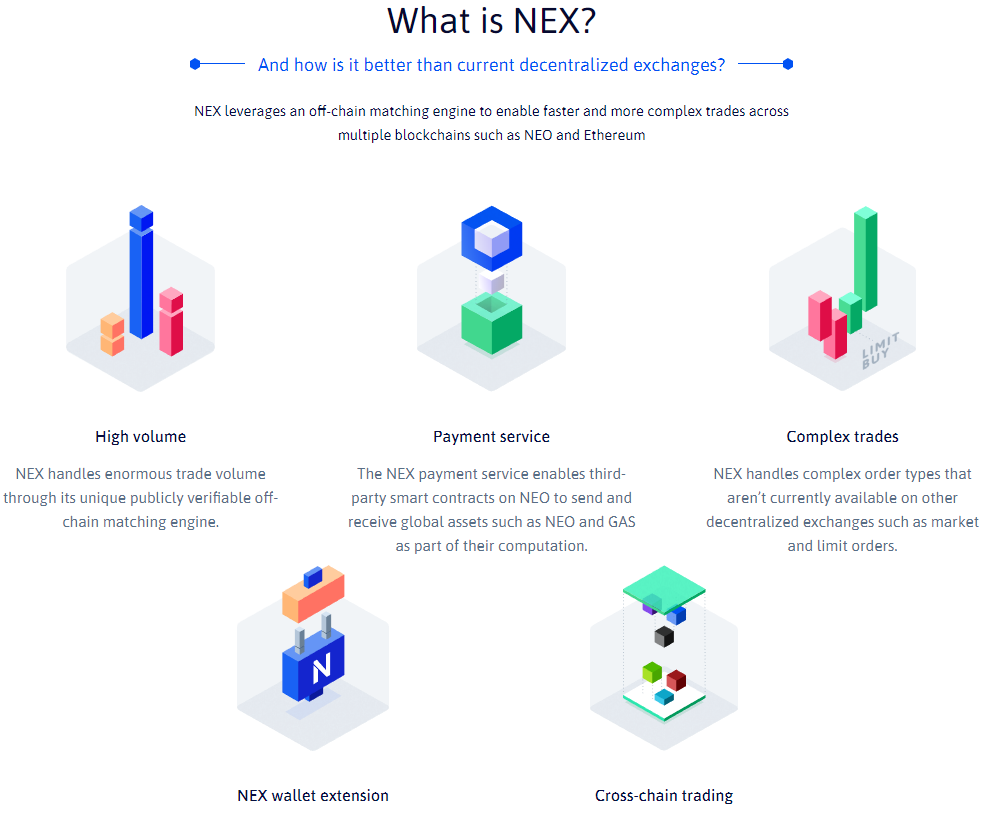 The Nex Dex has a certain ring to it.

Decentralized exchanges are rapidly springing up left and right, and for good reason. Barely a week goes by that we don't hear about some new hack or data breach at an exchange resulting in some customer funds lost or some other misbegotten consequences.

In the past, Bitshares has remained one of the highest ranked (by market cap) coins supporting a DEX, but now an even more valuable blockchain is entering the scene, with NEX launching on the NEO chain.

NEX is currently pre-ICO and promises to solve a few issues with previous DEXs, including the centralization of the login portal, which can prevent all users from logging in if DDOS'ed (attacked.) It's far too early to make any assessment of their tech.

Plans for the NEX token include a profit sharing of exchange fees, similar to what KuCoin shares already does. Basically, every day the exchange fees are paid out to all holders of the token in proportion (similar to DPOS) in the form of the native coins traded. The results is a smattering of coin payouts each day for holders, similar to a payout from staking. This example Kucoin payout goes on for many more pages.

There is a lot of buzz for this coin (NEX), with people scrambling to get a chance to buy some pre-launch.

Now, one should always keep in mind that the subreddits for cryptocurrencies are often blindly positive. They tend to be filled with dedicated holders (or pumpers), are often actively moderated (read: censored to the upside), and frequently are even set to upvote only.

Having said all that, I haven't seen such broad-ranging positive sentiment from the Reddit comments on an as-yet-unreleased coin in quite some time. This could simply be the result of enthusiasm for a project built on the network of one of the largest and most promising coins (Neo).

However, I have a feeling it's not. People are literally fighting over who gets to buy accounts that (should) have the right to buy a mere $1000 worth of NEX at the pre-ICO launch sale. Most users seem to expect almost all of the users who won the lottery (chances to buy NEX were distributed by lottery for tier-1 KYC'd accounts) will buy close to the maximum amount allowed, leaving few for the wildcard round 2 (wherein users will have to pass a more rigorous KYC, including national ID verification, to purchase.)

As usual, these purchase options were all cut-off for US residents (this coin is a security), so if you missed out from the land of the hamburger, don't beat yourself up - you weren't allowed in anyway. You'll have to wait either for an exchange listing or the launch of the NEX DEX itself to purchase the token.

This has more hype than the McGregor-Mayweather fight.

Interesting article and very informative, thanks for sharing. I've smashed the upvote button for you!

so excited for this project!

The same as you about EtherDelta? Cause its the same. Or just like about Eosfinex? No you only exited about shit you wasted money on? mmm so it looks like you are blind idiot then. :)

The profit sharing model for any coin/business attracts me like crazy. combined with the fact that it is associated with a decentralized exchange turns it into catnip. meeeeeeeeeoooooowwww!

It's really a nice post.Carry on your creativity.We got many unknown information from your important content.I hope you will be posted more good articles for us.We will wait for your next content.Thank you.& really it's a helpful content.

You got a 14.14% upvote from @postpromoter courtesy of @lexiconical!

NEX is just ANOTHER GARBAGE. There is already Decentralized exchanges. That no needed any ICO. EtherDelta for example, how many of you using it? None. Bitfinex will build DEX on EOS platform, no ICO. How many of you interested? None. But if company creates DEX and needs ICO -you guys jump in like an idiots and lie to yourself just to feel good about your money wasting strategies.

I just wrote a post about Switcheo if you want to take a look as well. Keep up the great work!

Amazing information for us