A Huge and majestic blue serpent - Serpent of Eld

I couldn't partake in the previous challenge as I wasn't able to get a win with the given monster. But I'm here with this week's challenge. This week's theme is the untamed water monster SERPENT OF ELD. 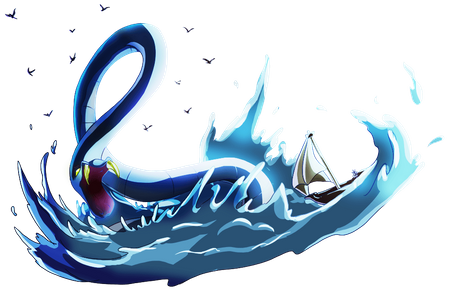 SERPENT OF ELD is a RARE rarity untamed edition monster that lies under the water deck. It has Dodge and Return Fire Ability at level 5. Though it's powerful at max level, I can only use its level 5 due to my summoner's level.

I've added the screenshot of my battle and you can also find a link to watch my battle below. It was a 22 mana battle with Lost Legendaries rulesets, I'll explain each monster used in the battle below.

I went with Alric Stormbringer Water Summoner, it gives +1 magic attack to all friendly monsters. Well, I didn't get any advantage from the summoner as I didn't use any magic attack monster in this battle but still I made a win.

My first monster was SERPENT OF ELD, I used it as a tank because of its Dodge and Return Fire abilities. It has 3 armor and 7 HP at level 5. I like its both dodge and return fire ability as dodge gives increased chances of missing attacks from both melee and ranged monsters. Return fire will attack back all ranged attacks.

In the second place, I used a level 6 Crustacean King which comes with Protect and Tank Heal abilities and has 1 ranged attack too. Although its protect ability didn't help me as my opponent came with rust. Anyways I go tank healed.

The third position was covered with another nice monster named Albatross. It's my helping hand for 12 mana games as I usually combine it with Sea Monster and most of the time I've won. It got tank heal and flying ability and only uses 1 mana, so it's a good fit for low mana games.

Next, I used level 6 Pirate Captain, it's a sniper and is inspired too. It increased my tank's melee attack by +1 and was also sniping my opponent.

In the fifth position I filled up with another ranged monster Water Elemental, it has dodge and Heal ability and has 3 ranged attacks at level 5. I put it at 2nd last so it can heal itself from sneak attacks.

Lastly, I used the neutral Furious Chicken level 2. I usually place chicken at 2nd position or at the last one. This time I put it at last so my opponent can waste a sneak attack on it.

My strategy worked very well, Serpent of Eld was the main monster which helped me win this battle. Otherwise, my opponent came with many debuffs and my tank healers were killed too early. So Eld's dodge ability did the actual magic and there were many misses that led me to win this battle.

Do you use Serpent of Eld often?

Well, I don't use this monster often but from now on I will use it when I see it's a good fit in a battle.

Wow! This is a great battle to showcase the Eld! He was missed so many times! Several of those misses definitely changed the outcome of the game.

Oh! And you don't have win the battle to share it... though it's nice when we win. 😉

(and... your last heading question, you forgot to change "Divine Sorceress" to "Serpent of Eld" 😘)

Hey! Yeah, I was surprised with this win and Eld did a great job. Ah, I thought we can only share when we win with the given monster. Alright, I will not skip next time even if I didn't win. heh

I just edited the heading it thanks for noticing. I was sleepy while making the post so 1 mistake was obvious lol