Link to current media articles related to student Bradley Thornton. Thornton is notable as media articles state he graduated from the school in 2016, yet he was chosen for media spots after the Parkland event. This is of note because videos and images link him to the other main media student personalities from Parkland and the schools TV production club. He is also featured in a June 2017 video made by David Hogg and included below.

Thus, it begs the questions "why did the media choose him? Who acted as the liaison between all these acting teens and the media? Why were school TV and acting club personalities chosen as anti-gun advocates rather than regular students not affiliated with these clubs?" "How is it that all these Parkland 'survivors' happen to be good friends and have all seemingly previously appeared together in acting roles in these school clubs?" 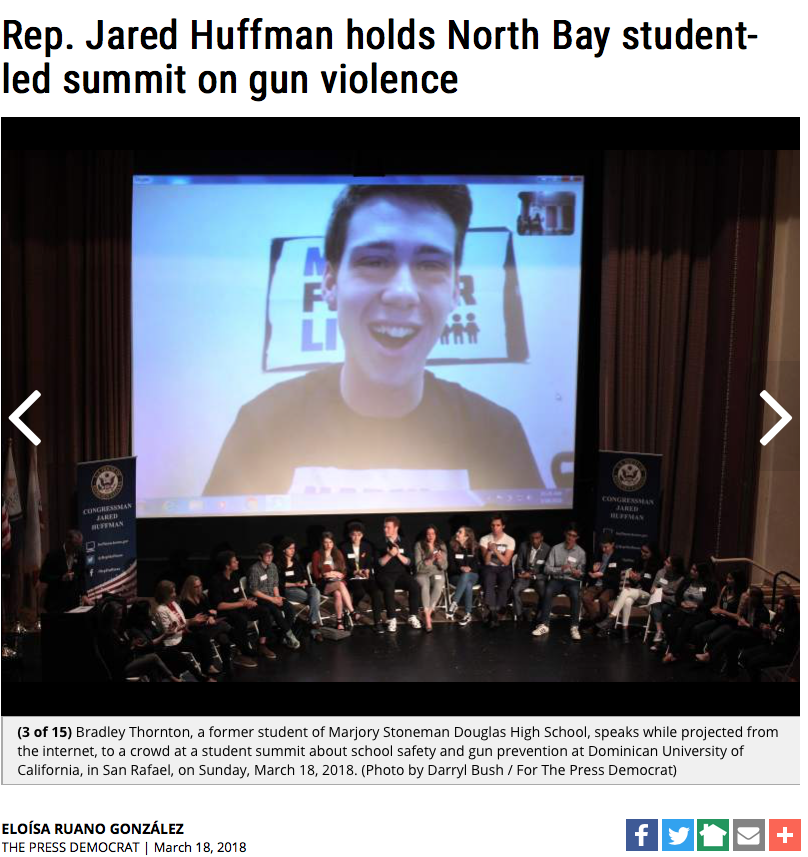 Image of excerpt from article:

Image of excerpt from article: 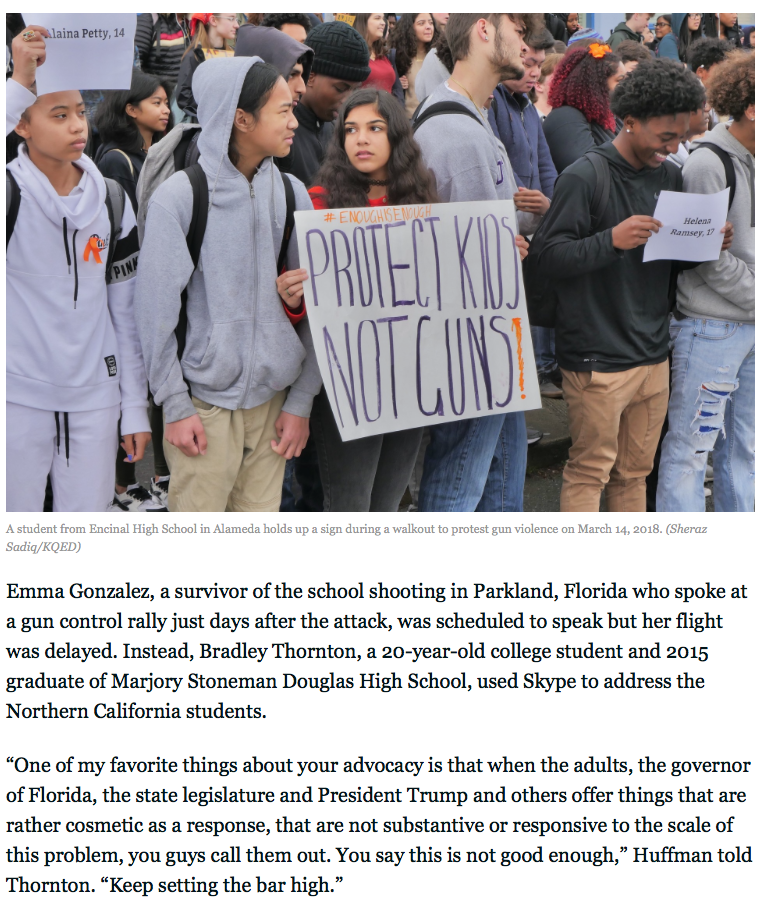 He appears at the 20 second mark in the following video made by TV Production channel 2 in May 2015. He then is featured throughout the rest of the video and performs alongside Matt Deitsch who is the brother of Ryan Deitsch, another Parkland rolled out actor. Ryan Deitsch is notable for his bright red hair. Matt Deitsch is on scene at the 45 second mark.

Still image from the video: Link to 2nd video featuring Bradley Thornton acting. He appears at the 11 second and 22 second marks in the following video (Ryan Deitsch is also featured in this June 2017 video, as is also David Hogg, Delaney Tarr and Alex Wind, all student actors that were rolled out by the media following the Parkland shooting event on February 14, 2018:

Link to Bitchute version in case You Tube version is deleted:

These are images from the Facebook page of Matt Deitsch, Ryan's brother, showing he is also involved in moviemaking: 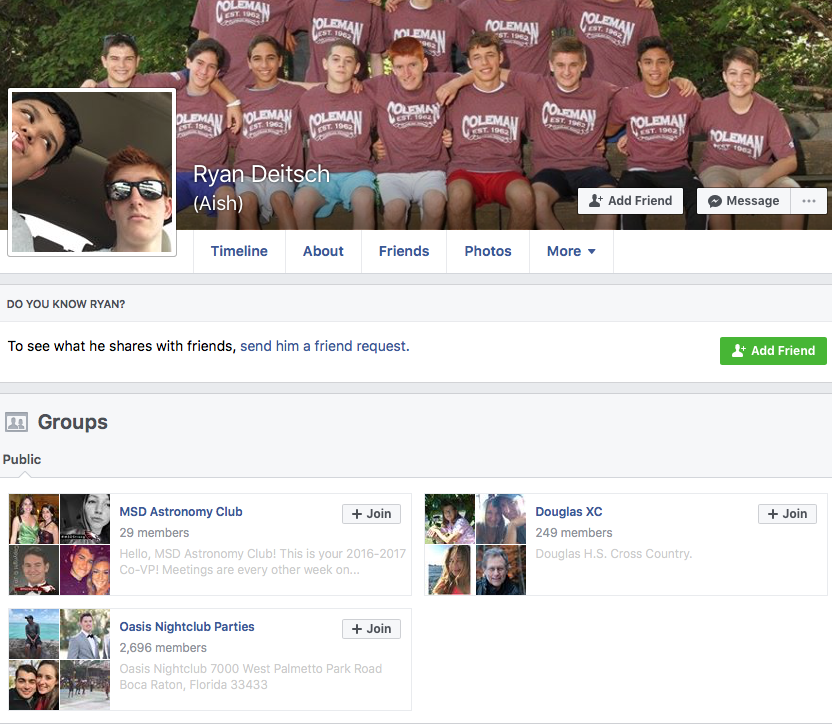 One of his likes - (the adult material on his page is worth highlighting due to the fact that he is portrayed as such an 'innocent' teen by the US media. Thus, he may not be as innocent as portrayed.) 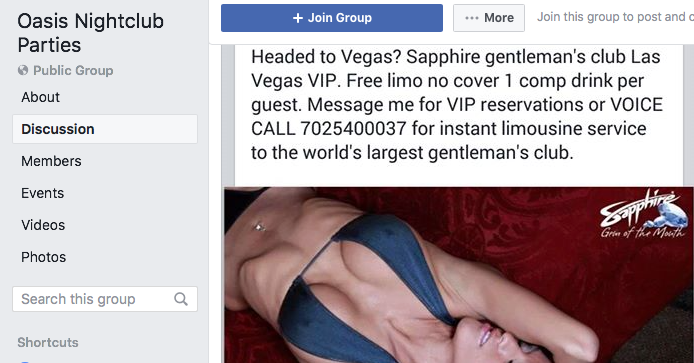 (Note: If you click through on the You Tube video of Delaney Tarr above then all of the school Production team videos featuring the Parkland actors will appear to the right hand side on You Tube. Thus, other extensive videos are available for ascertaining more information related to these individuals and their relationships to each other.

Image from the video includes comment by Ryan Deitsch below. Note that all these students were linked to each other well before the Parkland shooting event. Thus, one should logically ask how it came to be that the mainstream media only rolled out student actors and school TV personalities who were all friends to advocate against gun possession by the general public? 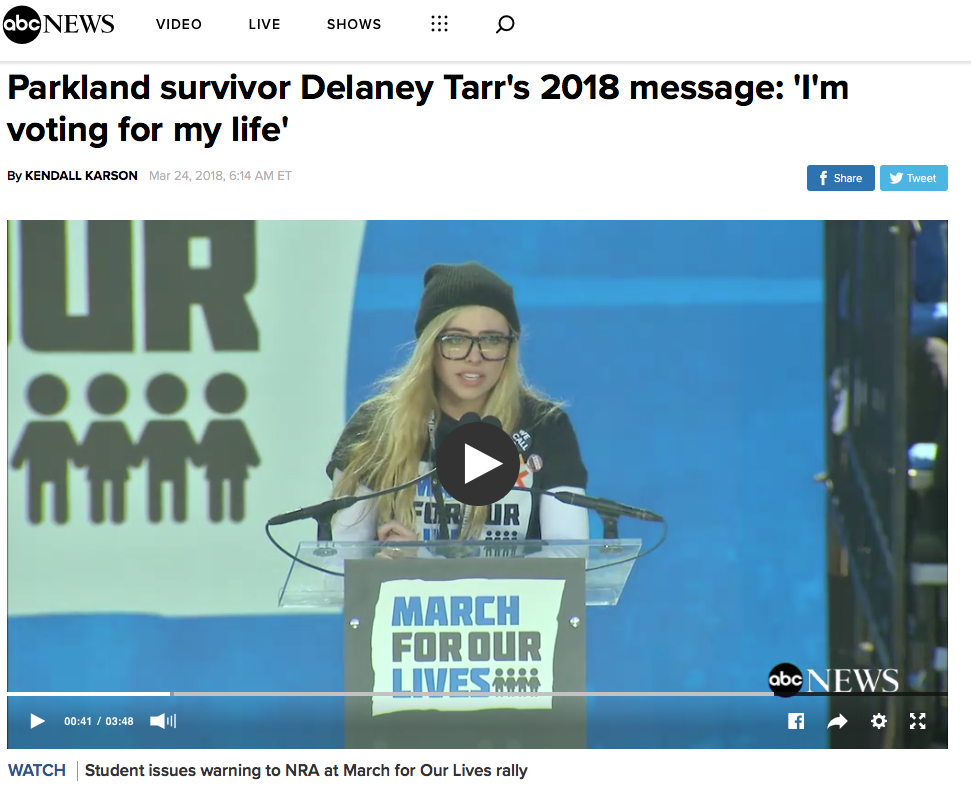 New information from the Facebook page of Isabelle Robinson, the girl David Hogg interviewed in the basement of the school. Her uploaded Facebook images show that she appears to be also involved with the school TV club and is related to the Rothschild family.

In the 2nd video she is referred to as Alex by David Hogg (thus implies they did multiple takes): 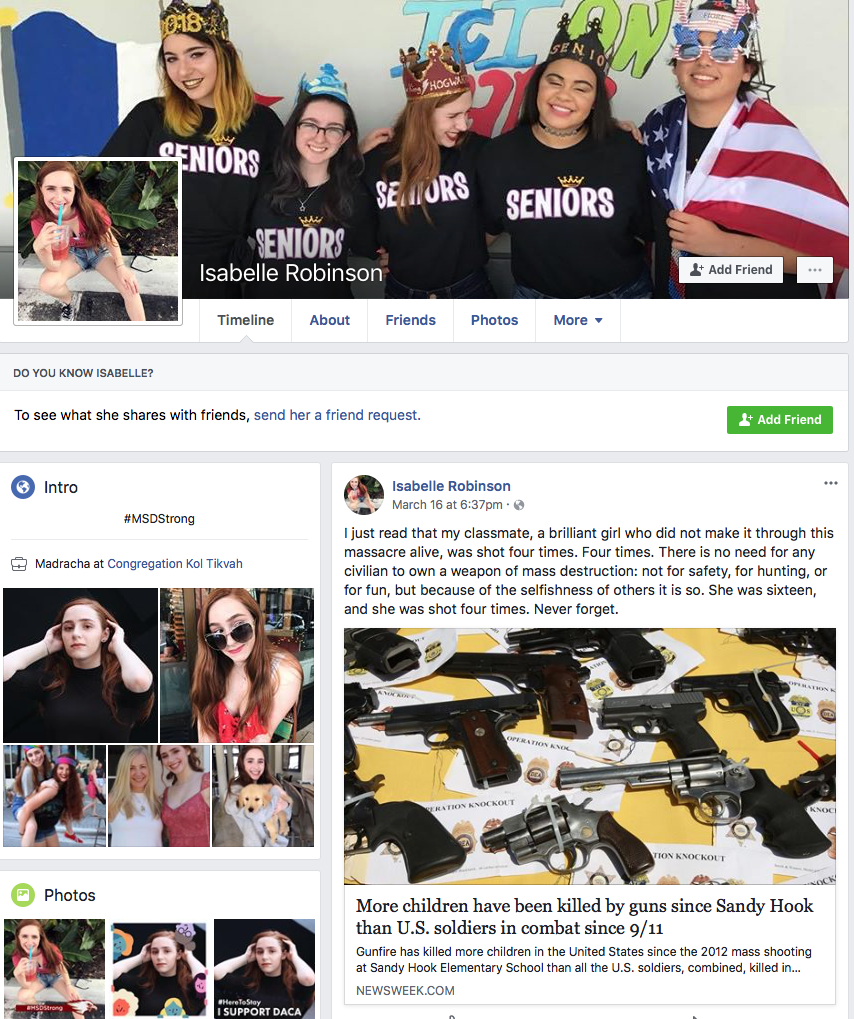 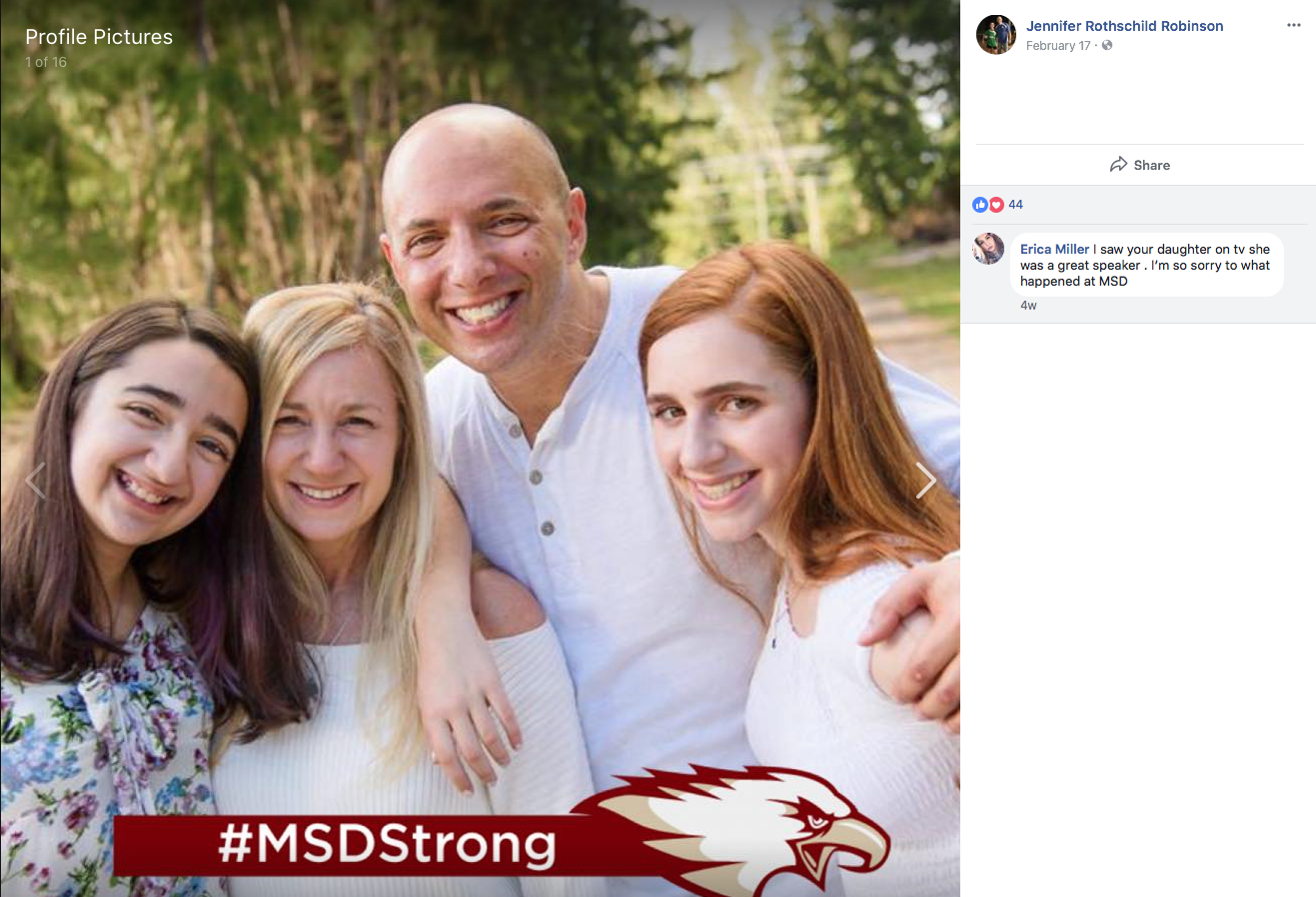 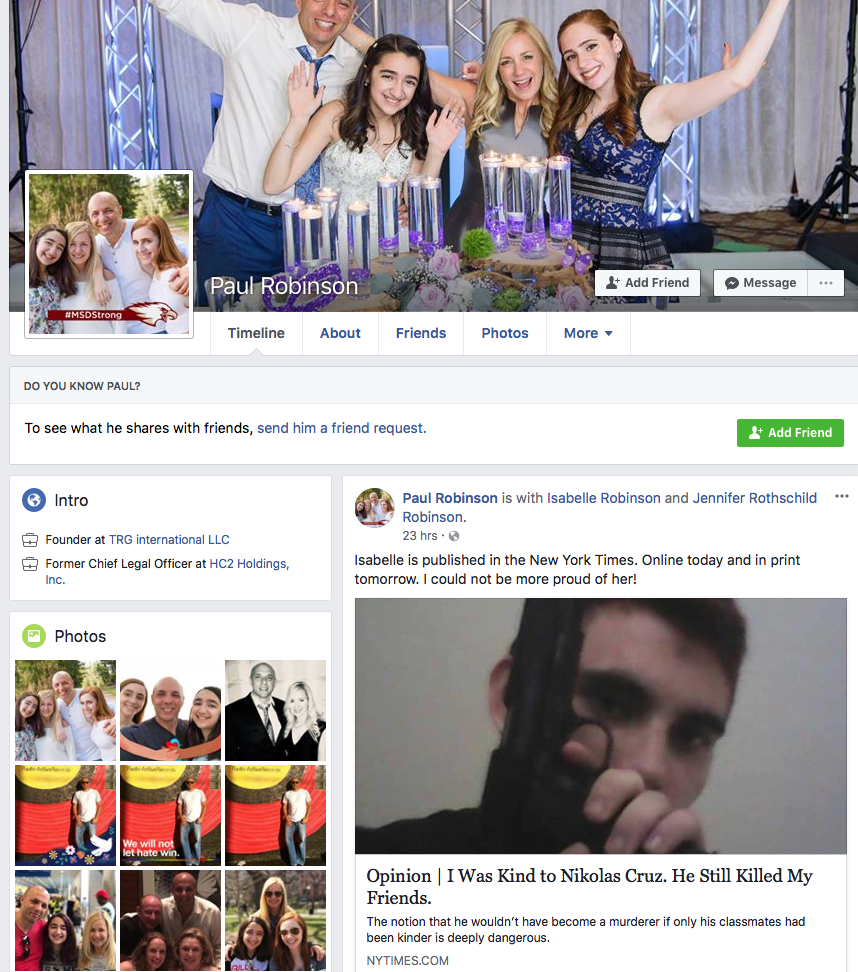 Excerpt: The bridegroom, 30, is a counsel for the Senate Committee on Governmental Affairs Special Investigation of campaign finance practices. The bride, 31, is an associate at Gilberg & Kurent. She graduated from Cornell University and from Brooklyn Law School. She is the daughter of Elaine and William Rothschild of Wesley Hills, N.Y. Her father is a photographer in New York, and her mother works with him as a stylist.

This final video is from NBC News and features the student actors from the school speaking at the Harvard University Kennedy School on March 20, 2018. This video is notable because Matt Deitsch (brother of Ryan) is featured along with the either student actors, even though he graduated well before the Parkland event occurred. It is also notable because the introducing host states that "tonight, we turn to hashtag never again, and the efforts of tonights guests to turn this moment into a movement to organize this weekends march and to galvanize public opinion". In other words, through his own words, the representative of Harvard plays an active, biased role towards antigun advocacy before the discussion even gets underway. Thus, the event is not so much a 'discussion' as it is an agenda driven anti-gun promotional event.

This overall post is notable because it features two former students, Ryan Deitsch and Bradley Thornton, who were not at Parkland during the shooting event on February 14, 2018 but who were involved with the schools TV club and the other student actors. Once again, this begs the question "why were these people chosen by the mainstream media and Harvard's Kennedy School to be antigun advocates?"

Link to other posts related to student actors at Parkland:

Caveat: All information above, and my opinion derived from such, was acquired through postings conducted online by the individuals mentioned within the material and other researchers. I leave it up to diligent citizens to judge for themselves the validity of the aforementioned material and my opinions in regards to such, as is their right. This information is posted as a public service. The fair use doctrine recognizes that rigid application of copyright laws in certain cases would be unfair or may inappropriately stifle creativity or stop people from creating original works, which would harm the public. So, the doctrine allows people to use someone else’s copyrighted work without permission in certain circumstances. Common examples include: criticism, commentary, news reporting, teaching, scholarship and research.

Sometimes true patriotism requires dissent and revealing that which the PTB would prefer remain in the shadows. I subscribe to the philosophy of USMC General Smedley Butler and believe war is a racket, a rich man's trick. I am a Marine Corps vet (1st Battalion, 6th Marines, 2nd Mar Div) who loves America and hopes to help save lives of innocent people and my brothers and sisters in the Armed Forces during this time of wars of deception and false flags (White Helmets). I believe my posts here at Steemit and my Clarity of Signal Wordpress site are very important for humanity right now and recommend people get red pilled and research these issues thoroughly themselves.

Links to my posts on the White Helmets terrorists proving the US media can be quite deceptive in their reporting:

My goodness this shit is so obvious...For some reason I still think this is all just a distraction from something else. There will be no repeal or notable changes to gun laws IMO. Just a gut instinct.

what is going on with Delaney Tarr's glasses. Who is making her wear those things. #FreeDelaney