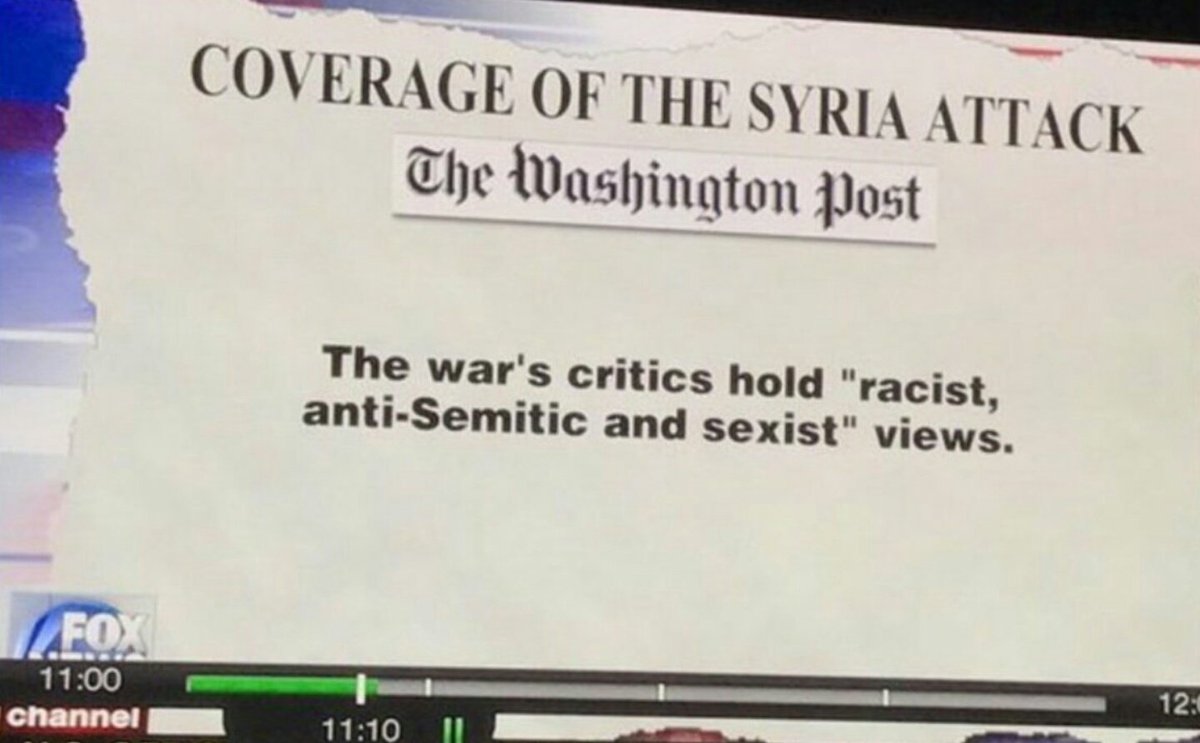 With intervention in Syria, we see many voices speak out against it, even Donald Trump himself before he became president was speaking against it. We also saw how mainstream journalist across different western countries were all most all for it and pushing for war, with rare few who spoke against it. Not only you weren't able to question it on their platforms, as one British general started to question was immediately cut off on SkyNews. They started even labeling anybody who speaks against it as Russian bot, but anybody who actually looks at their profiles saw that they were clearly real. Even going as far to label anyone who is anti-war as some kinda extremist. In what state is the media if they don't question power, if they are clearly pushing war. Where is this all leading to?

Trump is just the latest in a long line of presidents who trample on International Law. The historical record shows that whenever a U.S. president takes the kind of action Trump did with his bombing of Syria this month, there is big trouble. Not only do many people die, but national economies, democracy, peace, and freedom all end up in the trash can. Trump, like many presidents before him, essentially argues that international law must be broken if it is to be saved. With this bombing, however, he violated more than just international law. He, like his predecessors, also trashed the U.S. Constitution which gives the power to wage war to Congress, not to the president. There is no Congressional authority for any attack on Syria. You can find a link to the full article at bottom of this post.

Scientists with the Ocean Cleanup Company are gearing up to tackle the Great Pacific Garbage Patch, an expanse of garbage in the Pacific Ocean that contains as many as 1.8 trillion pieces of plastic and spans 617,763 square miles. Using a device designed by 23-year-old inventor Boyan Slat. Though the device cannot trap microplastics, which are already present in the water, Slat believes that acting now can prevent much more severe rates of pollution. “Most of the plastic is still large, which means that in the next few decades if we don’t get it out, the amount of microplastics can be tenfold or 100-fold. It’s this problem that’s waiting out there to magnify many times unless we can take it out.” In a few weeks, the Ocean Cleanup Company will begin testing the device off the coast of San Francisco, ensuring it can be towed 200 miles to the garbage patch and finishing assembly. It is expected to be operational by the summer.

Scientists have found a record amount of plastic trapped in Arctic sea ice, raising concern about the impact on marine life and human health. Up to 12,000 pieces of microplastic particles were found per litre of sea ice in core samples taken from five regions on trips to the Arctic Ocean – as many as three times higher than levels in previous studies.

You should also check out how Senate proposal to constrain Trump’s war-making would actually expand the perpetual war.

You can find all the links to the stories here: https://libertydotreport.wordpress.com/2018/04/24/anti-war-voice-labeld-an-russian-bot-and-more/