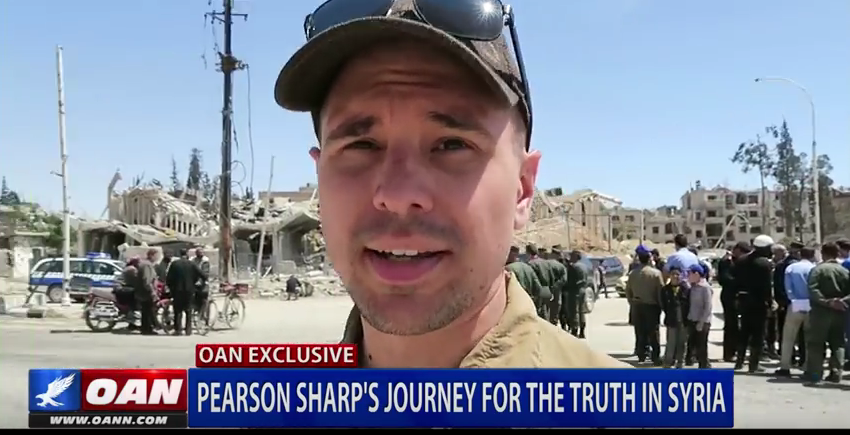 An exclusive report by Pearson Sharp of One America News, who went to the site of the alleged chemical weapons attack in the war-torn town of Douma outside the capital of Damascus, reported that residents there deny an attack happened and instead claim it was staged by rebel forces in an effort to incite a response from Western forces. And he talked to the doctor who was on the duty that day, who said there were no chemical attack victims. And even said that that day group of people walked in with cameras, sprayed water on some of them, filmed that and left, while there were they looking at them, there were no signs that they were gassed. Same conclusions found the journalist from the UK for the independent, who also was on the ground in Syria.

In more Syria news, a survey by FAIR found that out of top 100 papers in the US by circulation found not a single editorial board opposed to Trump’s April 13 airstrikes on Syria. Twenty supported the strikes, while six were ambiguous as to whether or not the bombing was advisable. The remaining 74 issued no opinion about Trump’s latest escalation of the Syrian war. The UN Department of Safety and Security (UNDSS) continues to prevent chemical inspectors from entering Douma for their investigation, citing safety concerns. They have offered no timetable for when the Organization for Prohibition of Chemical Weapons (OPCW) inspectors will be allowed in. The U.S. nuclear submarine that helped the USA., UK. and French forces commit an act of war against Syria last week is no longer welcome near the waters of Italy’s largest seaports. As lies on Syrian gas attack unravel, US and UK shift to claims of Russian “cyberwar”.

North and South Korea Reportedly in Talks to Officially End Korean War. Technically, North and South Korea are still at war, and have been for more than six decades—but an "absolutely earth-shaking" new report on Tuesday indicates the conflict may soon be coming to an end.
Citing an anonymous South Korean diplomatic official, Munhwa Ilbo—a South Korean daily newspaper—reported that the neighboring countries are hashing out a statement that could officially bring the war to an end later this month, when North Korean leader Kim Jong-un and South Korean President Moon Jae-in are set to meet in person for the first time.

Reported on RT says that Russian journalist in Syria found a boy who was in the video of a supposed chemical attack. He was in the basement with his mother, who said they ran out of food when they heard some noise outside. “Somebody was shouting that we had to go to the hospital, so we went there. When I came in, some people grabbed me and started pouring water over my head,”. He was eventually found by his father, who said he didn’t hear about any chemical attack that day. “I went to the hospital, walked upstairs, and found my wife and children. I asked them what had happened, and they said people outside were shouting about some smell and told them to go to the hospital. At the hospital, they gave dates and cookies to the kids,” he said. In the article also says that the doctor who was on duty that night saw a sudden influx of people yelling chemical attack, and started purring water on some of them. The doctor said that he didn't see any symptoms of the chemical attack.

Also, you can check out alternative explanation for a Skripal poisoning in the UK and a article on How to Outsmart Digital Isolation and Addiction, According to San Francisco State University.

You can find all the links to the stories here: https://libertydotreport.wordpress.com/2018/04/19/more-syria-news-and-more/