Outstanding job on this post and so sorry it got somewhat censored (it doesn't appear in your feed). I resteemed it nonetheless and it does appear on my feed (although at first it didn't fully)

I knew something was fishy about the Florida shooting when I saw that video of the blond girl saying she had just spoken to the shooter and was laughing. It just wasn't right, seemed scripted; so I had commented about this somewhere.

You did outstanding work on this post to reveal the whole charade as nicely as you did with the White Helmets extensive post. Well done my friend!

It is obvious that the Deep State is highly embedded with the MSM, and most notably with CCN & MSNBC. But it goes way deeper than that as can be attested by yet another (probably one of tens of thousands) of compromised "so-called" journalists like Olivia Solon of the Guardian (see corbettreport's open letter to her - which includes my own that I had sent to her a few days prior also mentioning your fine investigative work on the White Helmets in the comments section of that post).

It is, therefore, quite obvious that the MSM is pushing Deep State agendas (not only that Trump is the enemy, but there are so deeply pushing for gun control now).

One must ask: why? and look at the BIGGER PICTURE. So here it is,

There is an imminent financial/markets crash (and we are talking 50 to 75% or more). This will fleece and wipe out the masses (via investment losses, bail-in losses, pension losses,etc. ) And the Deep State thieves who will be looting this money know that the population will be pissed. And an armed population is one that is dangerous to them.

So, that is why they are pushing this anti-gun agenda so aggressively. They want peoples' guns at all costs.

BTW, if you are looking for a new villain to expose I suggest Jeff Zucker - the current President of CNN, as he is obviously a significant Deep State tool. 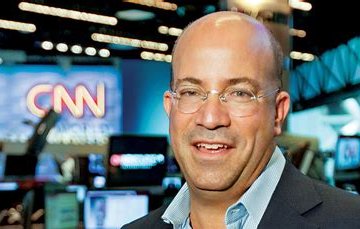 These Deep State operatives are the most despicable and nefarious of TRAITORS. It's time that we root out these rats and cockroaches by shining BIG BRIGHT LIGHTS on them!

I'm with you buddy!

Thanks Dan. At this point in time they are obviously quite panicky about something very large and it seems nothing is going right for them. I think this is what happens when you choose evil over good. Constant false flags and manipulation/gaslighting over choosing the harder high road that leads to real growth and harnessing of the best of human potential. Things backfire. It looks to me like they are trying to use what little momentum / smoke and mirrors they have gathered from the quick student campaign to roll out a new youth based US gun grab agenda while at the same time rekindle the Syria campaign via the UN today with another White Helmets (al-Nusra/al-Qaeda) false information psyop based around the Damascus enclave of Ghouta where US backed 'rebels' (read al-Qaeda) are firing mortars onto civilians and blaming the Assad government for bombing them. The Guardian UK is once again leading this propaganda campaign and its sickening to see as the White Helmets are exploiting children and infants as usual. People like George Monbiot of the Guardian, Eliot Higgins (Atlantic Council/Bellingcat) and Michael Weiss (Daily Beast) are back to their usual pathetic misreporting and support for these murderers. For people wanting to learn more, I recommend checking out WhiteHelmetsExposed on Twitter. https://twitter.com/WhiteHelmetsEXP

As far as Jeff Zucker goes, I haven't ever really paid attention to him, but I'm sure the creep level is high, no doubt. He's likely working for another government as it seems many in our media are these days. Hence their projection of their own crimes onto Russia. Deflection. They control the big 6 media corps and constantly push the obvious divide and conquer agenda on the American people.

The elite have constantly propped themselves up by always robbing the masses so if a big stock market crash does come again I think people need to realize its time to quickly form a new government and not become reactionary. I would hope that a new party could be formed before that takes place, one that takes all the current problems into consideration and helps bring Americans together around the common goal of exposing these issues that the elite have used to divide us and enrich themselves through perpetual war and chaos. Thats a big challenge considering how massively these tools have infiltrated all branches of the government, media, corporate world, think tanks, financial arena, etc. But it can be done if people get off their butts. It due to good people doing nothing that we have ended up where we are now.

It due to good people doing nothing that we have ended up where we are now.

You said it! Like those 99% so-called "good people" twats in the FBI.

Thanks for your reply my friend.

Sorry for the late reply on this one Christopher. I have a few outstanding resources for you that you can can perhaps use in this dossier:

Note that there were other notable speakers at this conference; so check out the list of names: https://www.youtube.com/results?search_query=CPAC+2018+speeches

Thanks for all this Dan. Interesting stuff. Will definitely be looking at it today.