The explosion will be searched by the 'Spider-bot' 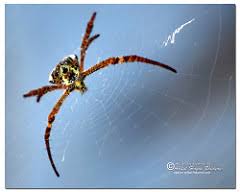 Germany's festo has the reputation of making robots. The company has now made a spider-bot or robot spider. Which can be used by the army in addition to the war. Such spiders have bionic legs. Such robots have been developed by exploring spider movement and tracking techniques. Military Times

But why is this kind of mechanical spider needed? Festo says a special type of spider named Flick-Flake is very special. Fast walking These spiders capable of running efficiently and safely Professor Richberg uses his talent to create mechanical spiders in sperm activity. Although mechanical, it is quite a real spider to make several traits exactly the fake. Such spiders or 'spider-bots' are expected to play a special role in high-tech or cloning warfare. Usually the robots walk, but the 'spider-bots' roll up and run almost. In order to keep pace with the movement of the war, it is known as the enemy's ammunition and its matching pair of vehicles.

it can be dangerous.

Spiders can never be dangerous.

Important post by which the battlefield may come in handy to the people.

take together we spider