Living in Luxury Off the Grid - For We Who Hunger for Power! (part 2)

There was a time that Doug speculated on putting a
mini nuclear power plant under the house (yes, they exist).

We decided to make the upgrades to the existing hydropower plant instead. 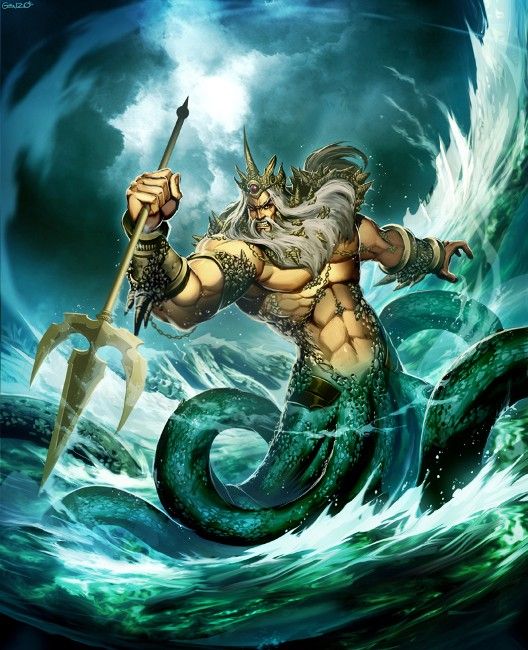 There are a bunch of different ways to set up a hydroelectric power generator however... We have a stream-fed pond on the mountain up above the house that acts like a storage battery. All the water in the pond is just waiting to dive into the penstock to feed our turbine 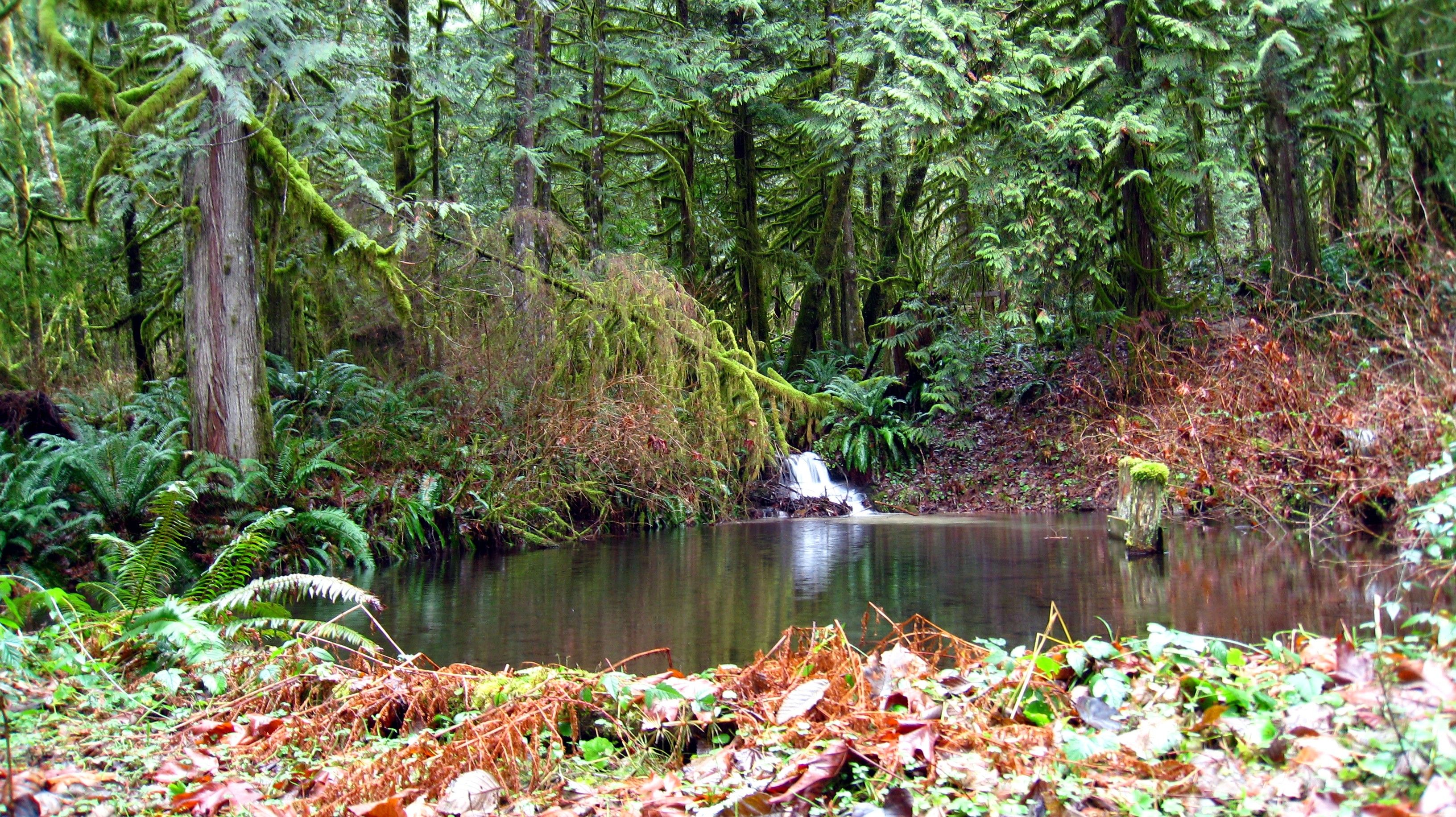 To get power from this type of generator the water needs to spit out of the penstock and onto the water wheel with as much force as possible. Our pond has good amount of elevation above the generator to provide the momentum.

Before the pond water heads for the generator it is directed over a filter. The filter both keeps the generator nozzles from plugging (most of the time) and it protects the turbine from getting worn away by grit.

There is too much water for the filter to suck up all the water so what is left continues down the mountain on it's own gathering more water from other streams along it's way. Does it look like everything's a brown mess? It was that kind of summer!

The water drains from the filter into the penstock. There's actually a bit of consideration that goes into its construction to make the force of the water as strong as possible when it finally hits the generator.

To minimize the friction of the water, (lower friction = higher velocity = more power), the penstock is as straight as possible and the diameter of pipe is as large as the water source can handle. Every little bit helps! 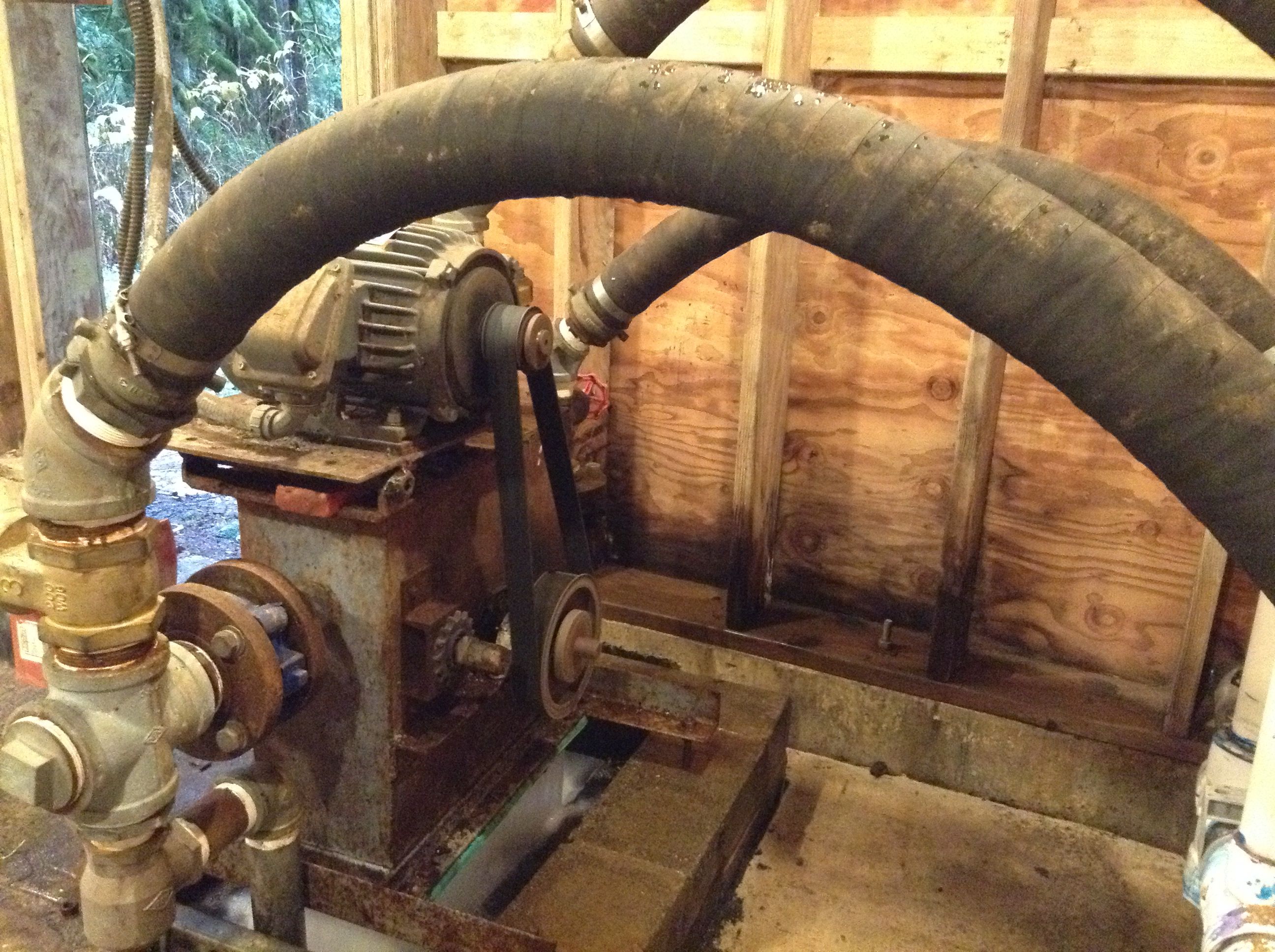 The water is further pressurized when the speeding water from the penstock is forced into nozzles with smaller diameter. The nozzles are aimed at the Pelton wheel in the generator.

We have 3 varying sizes of nozzles. All of the nozzles' valves can be opened up when we have a lot of water in the winter but the larger ones are closed in the middle of summer when the stream (and thus the pond) has less water. That is when we get most of our power from the solar cells.

(Thanks again giphy!)
And thus it is that (if you remember your high school physics) the potential energy of the water up the mountain is turned into kinetic energy in the penstock which the turbine uses to make rotational energy which spins a wire coil core within a series of powerful electromagnets creating electricity. The electricity flows up wires to be stored in the battery bank. 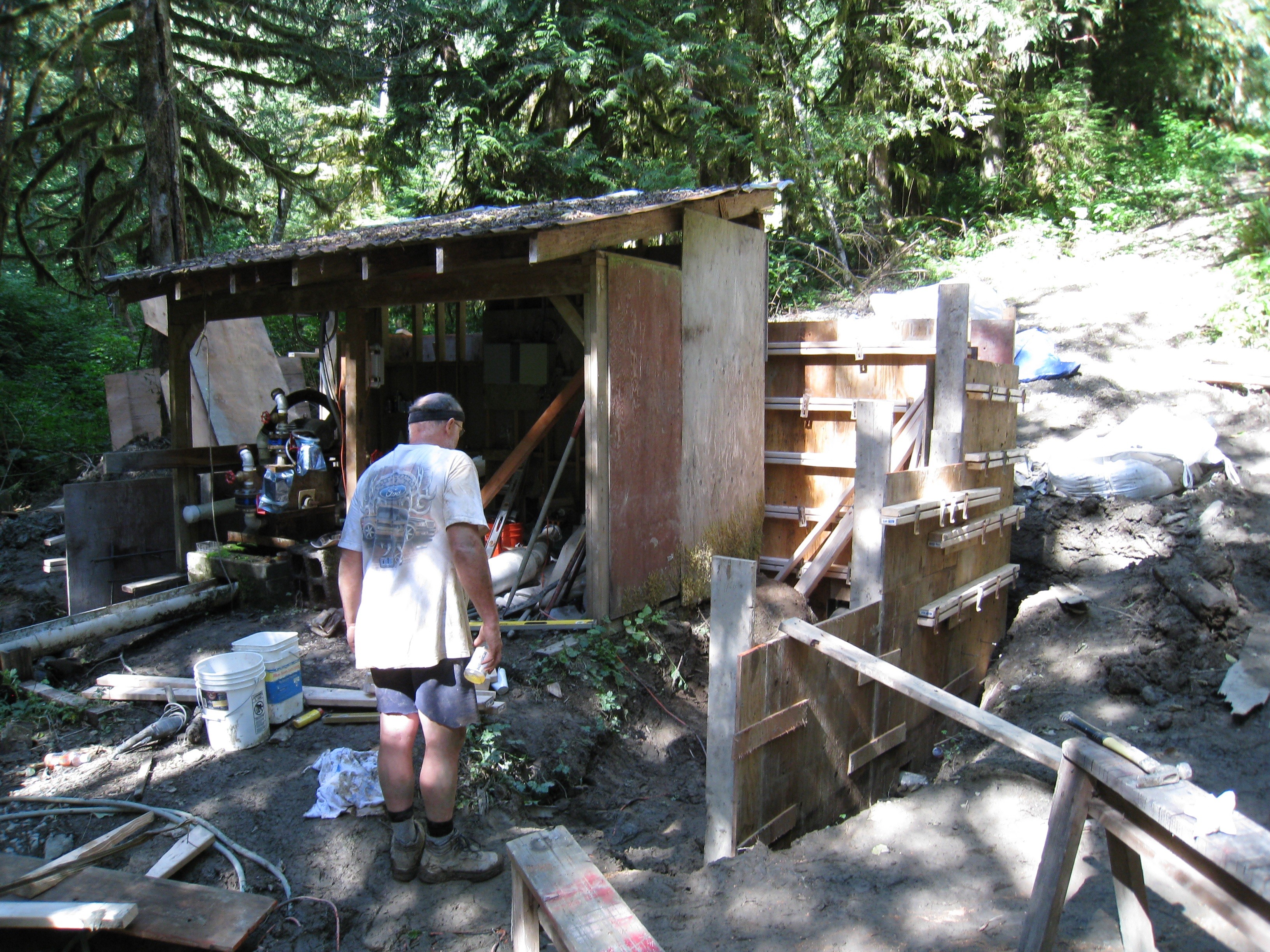 Our most excellent cement form maker, Pat, who built cement forms
for the new generator shed around the old shed.
We replaced the old generator shack right near the end of Doug’s
“Cement Construction Makes Better Buildings” Phase.

Since the shed was finished we have changed out the old Fu King (yes, that was its real name) generator with a newer, better one. The Fu King generator was as frustrating as it sounds and we're glad to be rid of it! Living in Luxury Off the Grid - For We Who Hunger for Power! (part 1)

I love seeing the details of this. It's more complicated than I realized, but cooler too.

How noisy is the turbine? Can you hear it from the house?

I was shocked when I learned that there's a small nuclear reactor right in the middle of Boston-Cambridge, as part of a lab run by MIT. The building isn't even all that big!

Whoops missed the voting period - have to give you a bigger vote on the next one!

The turbine is pretty noisy. It's hard to work on it with someone else who needs direction (me!) but it's far enough from the house and has enough forest between it and the house that you can hear it only from the 2nd story and only if there is something wrong - it makes a lot more noise when it is free-wheeling.

It surprised me to hear about such small-scale nuclear tech too. Doug was an officer on a nuclear sub back in the Navy and he had a lot of nuclear training there. He didn't really ponder it too long but the article he saw certainly caught his eye!

Thanks. Love to see you here. You have a way of making everything more interesting!

Hmm. I suppose if they can fit a nuclear reactor into a submarine they must make 'em pretty small.

logical, but have you accounted for possible loss of water in the future probably to evaporation?, might reduce the pressure of water flowing to the turbines.

We live in what is considered to be a desiduous rain forest and our water shows up when it rains (fall, winter, and spring). Our stream is much smaller during the summer when there isn't as much rain but it never goes dry (we believe that it is possible that it is fed underground from a large lake on the other side of out mountain).

In the summer when we only have the smallest nozzle open it still exerts the same pressure in the penstock as the pressure when there is enough water that we can open all the nozzles, so the small nozzle is still a good force pushing against the wheel, just not as much as if one (or more) of the larger nozzles was on. In effect, the generator works (but not as well) when the amount of water we have is less. At that point we are getting good solar power.

He considered the Nuclear option? The only ones I am even remotely aware of are for much larger than single family... Toshiba makes a 'town sized' unit.

And what a great name for the generator unit. I can see somebody like Chevy Chase doing the TV commercial "Get your Fu King generator at Exiter hardware..."

We did the bulk of the power upgrades back around 2005-2007. If I remember right, at the time there was some PBS story about a guy who had drafted plans for a 'personal' nuclear generator. Back in the day, Doug was an officer in the Navy and he had a lot of classes on the care and maintenance of nuclear submarines. The idea of having his own plant briefly brought a twinkle of avarice to his eye! I'm pleased to state that getting the components to put together your own nuclear plant is only a little more difficult than you might imagine. 😉

Wow! A lot of calculations and thought has gone into that project! I wouldn't know where to start! I am struggling to decide where to put my guttering around the fence lol Great work! :D

I sincerly wouldn't have known where to start if we did it from scratch! We made a lot of upgrades to what was already there but it was a really go thing that there was something to start with!

Good luck on the gutters. That's a pretty monsterous job too. We put new gutters on the house this summer and I'm glad my man is good with the engineering because he certainly is a perfectionist about getting them all sloped right for maximum drainage! Next year he wants to put the screens over them to keep the junk from falling/blowing into them and plugging the drain spouts. He says it's a harder job. I dunno.... !
On the other hand, it feels great once it's finished! 😊 Go for it!

This post has received a 8.37 % upvote from @aksdwi thanks to: @re-engineer.

Just read this and part 1. Very cool setup you have. Added you to my follow list. Will stop back over and give an upvote tomorrow, my power is so low right now.

Thanks much. I know the feeling. I'm just starting to recover from an upvote binge myself! There is just too much excelent content in the Steemit world!

I really want to get to the point of having that slider bar. Going to add you to my Steemdunk list so all new posts are automatically upvoted. If you don't know about steemdunk it's automates some of your curation. So you can set at what time it upvotes and even set your percentage for each author. So I have a couple that posts multiple times a day and they get a lower percentage on each post then someone that posts once a week.

Nice thing is that you can increase your curation rewards on the people you would of voted for anyways because you get your votes before others who just vote when they login. You get part of the curation reward on the following votes after yours. Really like it. Test it out for a few days and see what you think.

Sneaky Ninja Attack! You have been defended with a 5.01% vote... I was summoned by @re-engineer! I have done their bidding and now I will vanish...Whoosh