Living in Luxury Off the Grid - For We Who Hunger for Power! (The End)

In The Beginning There was Light… …and we looked and saw that it was barely adequate and that it wouldn't be adequate if we increased the number of things we needed to plug in.

Before we could upgrade the hydropower system we had to have a temporary power source. Doug was about to set up 3 computers for his work and we had to upgrade quickly.

A little research and a lot of reading reviews brought us to this little gem: Doug wired this cute little gas generator into our power grid to charge our household batteries. It was able to run for about 16 hours/day on 4 gallons of gas (we refilled it 4 times each day). For somewhere between 3000 and 4000 hours it ran beautifully - a little longer than the full amount of time we needed to set up our new hydro generator. It started burning oil after that point.

During the time we ran the little portable generator it powered the whole house which included the oven, refrigerator, vacuum cleaner, computers, lights, charging our tram, the washing machine, and the occasional power tool (though for some of the more heavy-duty appliances we still turned other things off).

Just as fantastic, it was so quiet that if we lost track of time we would have to open the window and listen carefully to find out if it was still running or if it had stopped and needed refueling. 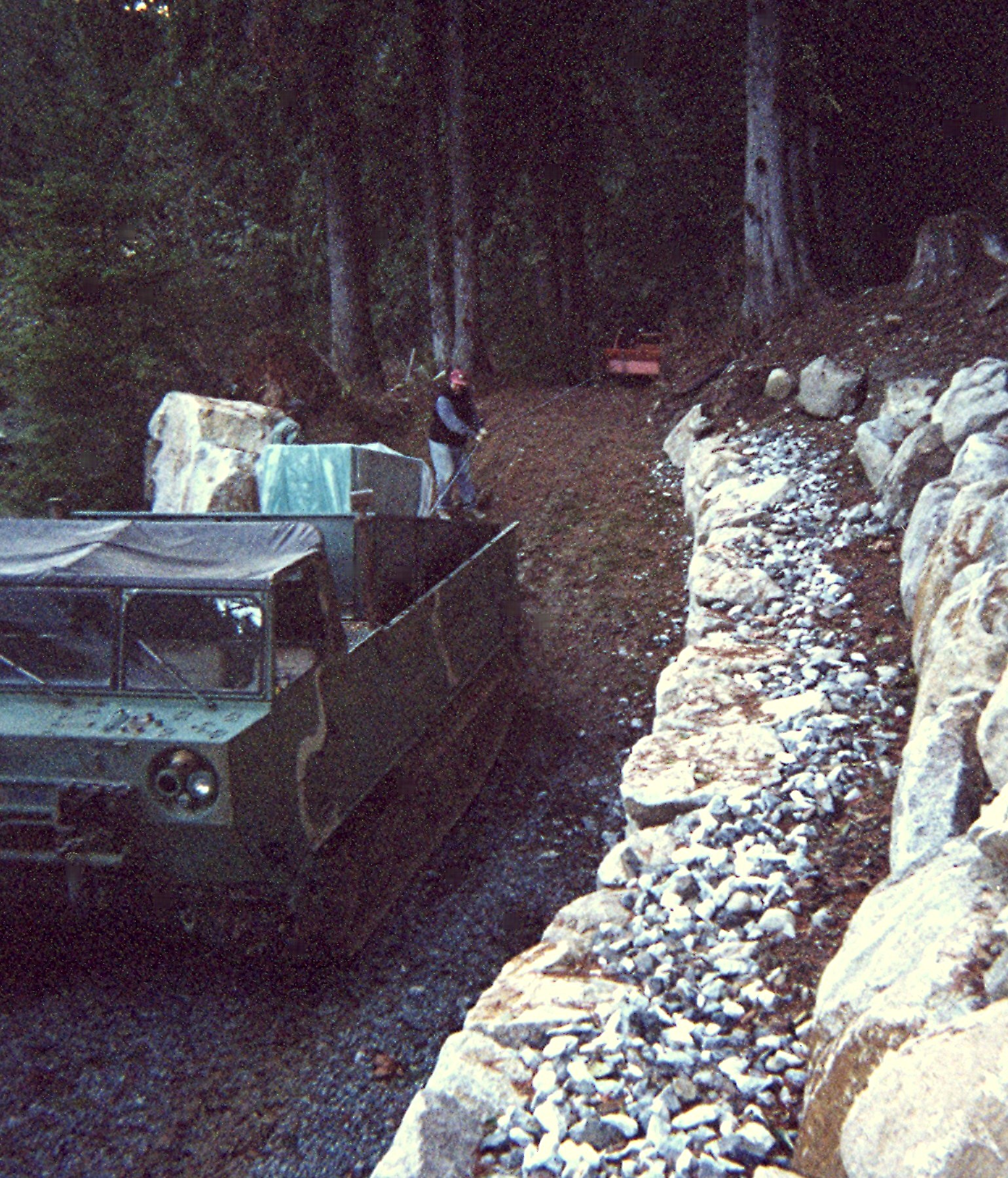 In the fall of 2003 (during the time we ran the small one) Doug put the new big generator on our cargo carrier and crossed the river. We got one that was big enough for a facility which is good for long-term use if we need it and is capable of providing all the power we may grow to need.

Doug used a ramp and the tractor to drag it off the cargo carrier, onto skids, and over to the battery shack. Mounting I-beams on the ceiling of the covered area next to the battery shack, (you can see them here) we were able to hang a rolling hoist and lift and move the generator into place.

Doug wired it up and the generator was ready to go. It turns on automatically when the batteries reach a specific ‘low charge’ point and stay at that point for a specified time. 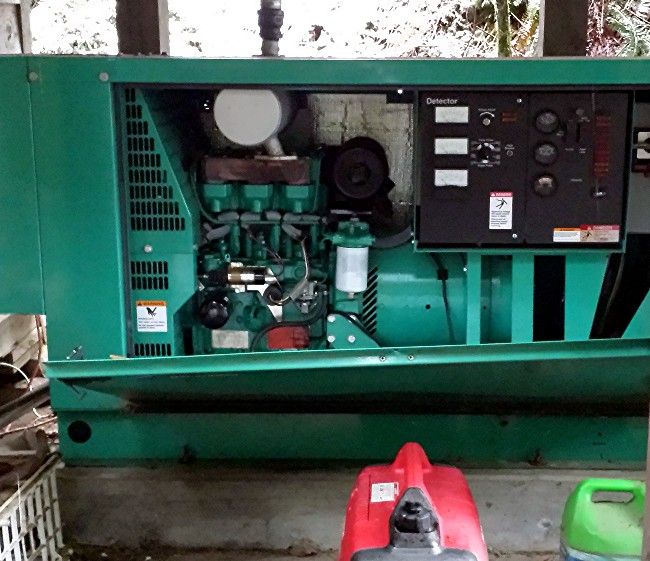 We can also start the generator manually. We run it occasionally to keep the motor oil from gunking up and sometimes it runs in the summer if the sun doesn’t show up early enough in the year to cover the point when the pond gets too low to run our hydro generator efficiently.

If you live in an area that gets cold weather, choose a generator that doesn’t require a secondary process to keep the motor warm. Heating pads are not the way to go. Anything built to produce heat sucks power like crazy!

To read the posts prior to this:

Couple of things:
First thanks for the terrific finish to your power series. I'm guessing I'd like your Doug, he thinks like I do :) Though I'd have put the lift in my motor shop and figured out a way to wheel the generator in place. Seems I have some spare motorcycle wheels that would work for that project.
Second: I worked several years out of a shop that had Honda small motors on a ton of retail and rental equipment. We had a small equipment specialist, but when busy we all got our share. I developed a really strong like for Honda power. They got that right.
Third: You really handled that vote suckup really well. I'll remember your response for my next one. The best I can come up with is WHY?

Thanks for a really wonderful post. I enjoyed and appreciate it.

I liked this series too. It was a kind of cool review on all the stuff that I've started taking for granted. Doug is fun. He likes to do a little of everything. His dad was the same so Doug came by it honestly and yes, he has parts lying around too just waiting for the right project... except for the exact right tool. Almost every new project seems to need a new tool!

The little generator is amazing. Never needs repair, easy to start, and it doesn't need 3 people to move it. When the first one died we went and got another which we use when we need power tools in places that aren't wired. We're still in love.

Yeah, I did a quick check on the beggar. His comments were all "nice post" and "please vote for me". If that wasn't the case I wouldn't have downvoted. My answer is pretty generic too (I confess) - I can use it if it's a mistake or if the guy's a jerk. I have a reference sheet that I keep on my desktop where I keep html code that I like to use, posts that I want to remember, and notes like that which I can just copy and paste. It's really handy.

Discovering your blog ! Your fun to read ! I love Chevy Chase !

It's amazing that little generator was enough to power everything. If I ever convince my Wife we will be moving to a much more remote location. My oldest, 12, wants to have a family farm where we all live on the same property and build multiple houses when she gets older. Sounds like a great way to live personally.

I was kind of on the fence about whether I was going to sound like an advertisement for the company or whether to fully explain how wonderful this little tool was/is. It was truly a lifesaver!
I know that my folks adore that most of us live close enough to just drop in. Encourage her to understand that she is only allowed to have a boyfriend if he wants to live close to you too! 😉

I have a much bigger generator which was my grandfathers. When he went into the nursing home we all got to pick up to $150 worth of items from the house before the estate sale. This was what I wanted...my wife thinks I'm crazy, but better to be prepared then have issues IMO. Next step is to set up so I can flip a switch and have my fridge and a couple outlets running off it instantly.

That's really amazing to see your generators and how well they work. The question to ask is can you hook up a Griswold amount of Christmas lights and have the generators maintain them? lol This month our power bill was $440! It's been a frigid cold like we've never experienced this winter so costs are crazy to heat the house. Having city power sucks sometimes! Things will go down to the low $100s in summer but winter drains power crazy.

Isn't that the truth! Last year was our cold one. Today is only the second time we've had snow this year and it ended more in sleet than snow! I'll take this kind of winter any time!

Wow, just wow, I am impressed. I like that little generator. @winstonalden got our old diesel generator going here at Toad Hall and when we lose power, which we do year round in a heavy wind which we get often from the sea, that thing will run two computers large tv screen (for my computer) chicken inucbator two heat lights (one for the chicken house one for the quail house) and coffee maker and microwave and also 2 electric heaters!

We want to do solar here one day, as we have an unobstructed roof of sun that would be ideal. Great post and I love that cool machine that looks like a tank or a volkswagon Thing on steroids.

A Vietnam-era military cargo carrier. It's buttoned up on the bottom to be water proof and it has serious pulling power. It's turned out to be so useful despite what I thought when Doug first explained how we really needed one!

You got upvoted from @adriatik bot! Thank you to you for using our service. We really hope this will hope to promote your quality content!

That little generator is cute for sure. I may have to look one up in case I can't start our old diesel one day. And I'd rather use that plus an electric chainsaw than a gas powered chainsaw.

If you haven’t already please check out :
Is commenting really worthwhile
Your Reputation Could be a Tasty Snack with the Wrong Comment!
Steemit Etiquette Rules
No one is interested in following, upvoting, or looking at the posts of a person who disrespects their work or interests by only wanting to talk about himself and his interests. If you want to reply to someone's post please have the courtesy to contribute to the topic of the post.