Living in Luxury Off The Grid - There’s Bats in our Belfry! Our main chimney cracked in an earthquake in 2007, two years earlier. Instead of rebuilding it we disassembled it down to the level of the floor in the attic and re-roofed over the chimney. We still have a very large wood stove in the middle of the living room that is unusable (someday we'll have to take the glass out of a large living room window out to get the stove outside as the doors are way too small) though not bad looking. 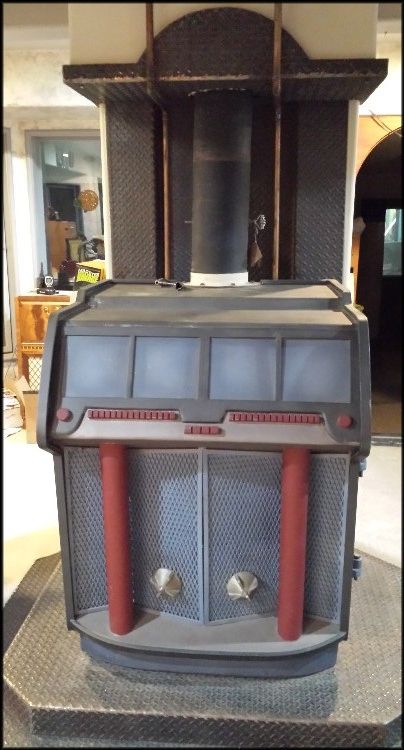 A friend of the previous owner made a custom-built stove that looks like a jukebox.

No, it doesn't play music. (Yes, people have asked.)


Two years passed and I was sitting in the living room, typing on my computer when I heard bumping coming from inside the wood stove. That's when we found out that when we replaced the roof the attic didn't get adequately sealed. Turns out that a small colony of bats found our attic and one had fallen down the hole in the attic floor where the top of the chimney was still open.

I put on some gloves and carefully cupped the bat in my hands and put it out of the window to fly off. Soon bats started falling down the chimney every day. Occasionally we had one come flying out of the stove door before I could grab it.

Herding bats is like herding cats except they move in all 3 dimensions. It's challenging.

I could tell when it was a previously 'rescued' bat by how easily it dodged my hands and then immediately found the open window where we let them out. (dumb mammal - if it remembers how to get out why can't it remember not to fall down the chimney?) Bat hanging in the upper corner on the screen in the window.

One fine morning in August I went to put another bat out the window and it bit into my glove. That was new. The bats had never tried to bite before! I put it out the window and a few seconds later I felt something moving on my arm. A tiny bat pup was clinging to my sleeve! 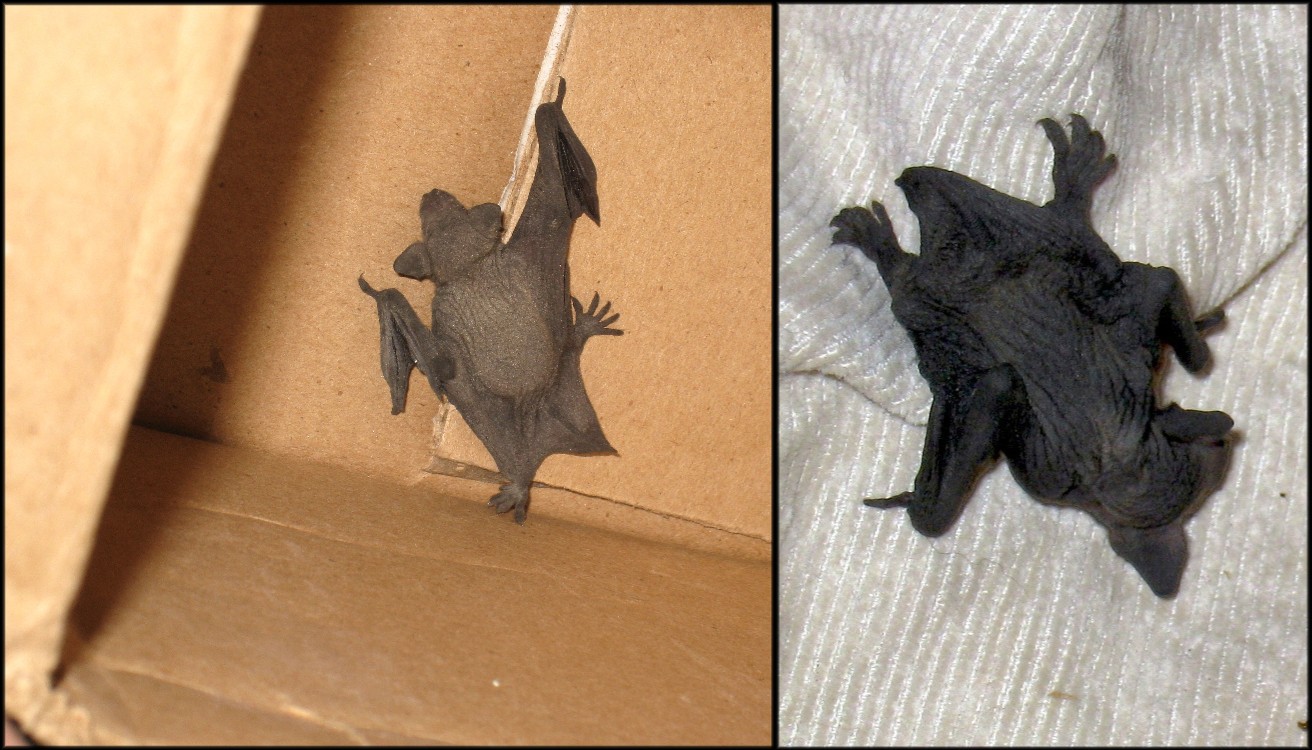 The pup was about as big as a nickel (21mm) and nearly impossible to get a good photo of
as the bats here are pitch black.

I put a hot water bottle in a small box, wrapped a couple towels around the bottle and made a little nest in the towels to stick the baby in then, with the baby squeaking fit to lead a band, I opened the attic trap door and shoved the box in. I checked the box at about midnight and found it empty. It really would have helped if we knew the American 'bat' dialect. Since the little critter was too young to fly and the box sides were slick cardboard I expect that it got back to its mother. After that I was much more careful of rubbing against 'mommy's' tummy but we only got one more mommy bat - she had triplets hanging on. I have no clue how she was able to fly with all that ballast but she didn't attempt to maim me and she took off out the window with all the pups hanging on.

We got the roof and chimney problem fixed in early winter (after the bats had left us to hibernate).

In the years since we haven’t had any more bats in the attic but people who wander past the workshop at the right time of summer can hear a vigorous, low-volume bird-song chorus that is really the bats, staying warm while huddling under the corrugation of the tin roof keeping toasty-warm as the summer sun beats down. It makes me smile.

Any internet photos I used are linked to that photo. Click on it to go to the site. Any photos that are not linked are my own.

Thanks so much! It's a lot more fun thinking about it now than it was back then!

You flatter me! I can understand French better when it is written but I have difficulty with speaking or writing it myself. I took some of the language in university and I've been to Paris a few times but even a little girl (maybe 5 years old?) laughed at my pronunciation when I tried to get around her when I was riding on the TGV. I laughed but her mother was very embarrassed! On this site I like to use Google Translate as it makes my translations faster and helps me get my sentence structure right. I hate missing interesting posts just because I'm not very good with translation.

Glad to meet you. This is what I envisioned Steemit to be - meeting new people with similar interests even if they don't have location or language in common!

Sweet story, thanks @re-engineer! Bats are lovely animals, and their shit is fantastic fertilizer. But too many of them, and it's a pest...

Research warned us that bats are incredibly hard to get rid of once they move in. It was a lot of work to find and plug every tiny hole in our roof and attic. It seems like bats only need the tiniest hole to get in.

The bats coming has made a huge difference in how many biting insects we have though. They must be eating huge numbers of bugs! When we first moved here we spent a lot of time and some money trying to keep from getting bitten to death. Now we need to worry about it when we go into the trees as the afternoon cools down but it isn't at all the problem that it was.

wow....what a beautiful nature dear friend
I love your post,, thank you for sharing with us

Wow, what a story. Were you worried about the bite? I think bats carry rabies in the USA don't they?

We once had a bat in our old 300 year old house on the Cape. As it is a true old Cape the second floor is really the attic and it is a finished floor of the house, but not sure how or why the bat got in but it was clinging to the ceiling by the chimney that is freestanding and runs inside the house. They always had them inside to keep all the heat produced from the fires.
When we saved him we weren't sure what to do with him. We were gonna call the animal shelter but then let him go a bit down the road in a great old cemetery, I guess we thought, 'bat, ghost, halloween, cemetery'. We only had the one though, but I think it was the first so it couldn't tell it's fellow bats and we never figured out how it got in.

Down the road was probably a really safe place to release your bat. Anywhere close to it's territory would be good. You can rest assured that you saved him! When we began having trouble I did a lot of research and once bats find a place they like it's really hard to get rid of them. They like their territories!

Rabies are like the flu - either everyone has it or no one has it. Western Washington has had only a couple cases in a very long time so I wasn't worried especially when I discovered the pup and realized that the mother undoubtedly thought it was justified! We were quite worried about how to deal with the pup and we called the vet for advice. When they learned that we knew where the bats were holing up they figured that there would be no probs with the mom finding it again. The little thing was squeaking for all it was worth. I'm glad we had the hot water bottle though. I think that bats are maybe a bit sensitive to cold.

In retrospect, though we had a lot of clean up in the attic, it was kind of a fun/interesting experience. I expect I wouldn't have thought so if we hadn't won back our attic!

Cold Chimneys seem to be like 'bat crack'. In my youth in EWash it was a regular occurrence.

We have quite a few bats here, they serve a really important part in the ecosystem. I love to watch them in the late evening and early morning as they chase bugs in the sky. Bugs obviously do not fly straight trajectories.

In the past few years we've had more and more bats around our place. Probably because we aren't feeding hummingbirds like the former owners (hummingbirds eat a lot of bugs - sugar water is just energy) so, fewer hummingbirds, more bugs. The bats seem to be much better at keeping the mosquitoes and biting flies down too.

My wife would have fraked out she hates bats!!
Following!

A lot of people are afraid of them but I don't understand why. I don't think any of them have ever met a bat!

This post has received a 13.66% upvote from @aksdwi thanks to: @re-engineer.