OmiseGo Currency Review - Is this the Currency who has The Whole Package?!? If in the previous Review we talked about Ripple who wants to help people transfer money through the banks, OmiseGo wants to strip the bank (Unbank the Banked - the main title on their website) and be a solution for people who don't have a bank through instant transfer time and zero commissions through an automated and decentralized system. Sounds ambitious? It's not even the tip of the iceberg ...

In this Post, we will talk about the company, the currency, the staff but mostly we will try to enumerate the aspirations and the problems that it's trying to solve and believe me there are quite a few...

The company is still under development and is based on the Ethereum's Blockchain. In June, the company plans to start launching its own Blockchain and thus disconnect from Ethereum system. OmisGo is based in Thailand with branches all over Asia, a subsidiary of Omise Company, which has been active for four years in the field of digital payments service in Asia and is considered one of the best companies in the field.

The Idea of the Company

Well, I'm going to try to summarize the inexhaustible, hold on tight. OmisGo's vision is to establish a digital financial system that will operate through a smartphone application that will be a digital wallet where all types of money, physical or digital (dollar, euro, bitcoin, etc.) can be stored. The company will allow direct financial deposit of all types of money, physical or digital without the need for a bank. The system will contain a distributed conversion platform that will enable automatic conversion of all types of money automatically and immediately. complicated? Let's do some order.

How will all this work?

As we told OmiseGo, will have its own blockchain. The Blockchain would serve as the basis for all payments arrangements that would be publicly exposed on the blockchain, opposed to Bitcoin's Blockchain working through "Proof of Work" System in which transfers are made by reactors who use enormous processing power, thus confirming transfers and receiving Bitcoins as a reward, OmiseGo will work through "Proof of Stake".

On what platform all this happens 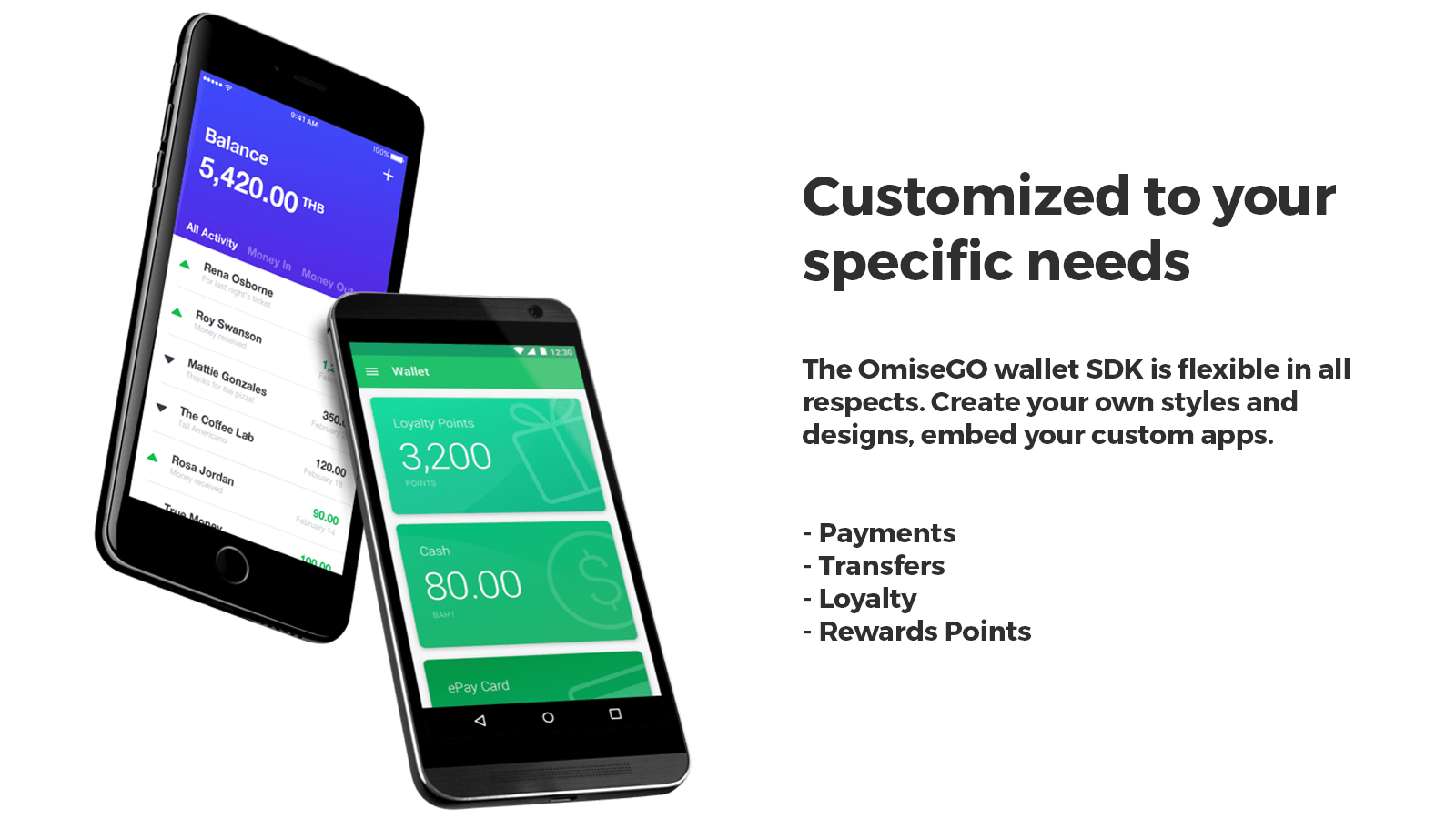 The SDK wallet is more than just a wallet that will contain all kinds of currencies. This is an open-source wallet that will allow any company to create its own wallet on OmiceGo's Blockchain. What's the problem that it solves? Today, for example, you want to store Ripple, Ethereum, Tron, and Neo in one wallet. You can not. Because there is no single wallet that supports them all. The SDK will allow a unified platform that will hold all the wallets together. That's not all, the platform will also include physical money/Fiat. All these funds in the wallets will communicate with each other and allow direct conversion with zero commissions between each wallet. how? Here comes the DEX.

This is another of OmiseGo's built-in systems that will enable conversion of all currencies (dollar, euro, crypto-crypto, dollar-crypto) quickly and with zero commissions. For example, If you are flying to Switzerland, and the banks or changes takes a high commission on the conversion between US Dollar and Franc, OmisGo will offer cheap and fast money change. The same goes for digital coins. Just a minute, so how exactly am I supposed to deposit money if OmiseGo doesn't work with a bank?

Depositing physical money(Fiat) without a bank?

As we said OmiseGo is Omis subsidiary, which has branches in Asia where you can deposit money and that's just the beginning. OmisGo has already begun to close deals with a lot of companies and corporations that will use the platform and will also make deposits through them. One of them is none other than the McDonald's of Thailand, which signed a contract with them. Eventually, you can walk down the street and post in stores like 7/11 and deposit money into OmisGo's SDK. But what, people will start to leave the bank suddenly and devote themselves to the new technology ?? Asia is like a big family. Indonesia, Japan, Thailand, South Korea. All have relatives who work in various Asian countries and transfer money between the two countries. At the moment there is a huge problem that Asia is dealing with. There is a problem transferring funds from countries. Many immigrants from neighboring countries cannot open bank accounts in the countries where they work. And right now in South Asia, 73% of the population has no bank! And the country has been looking for solutions for years. Currently, OmiseGo received a reward from the Thai government for the "2017 Project" and OmiseGo has close ties with Thailand's economy minister to promote the project. So if you thought the government would not allow it to happen, it actually works with them. Let's assume that all Asia and finally the West will use this system. This is a huge amount of money transfers, can the system handle it? now we have reached the highlight.

This is the revolutionary system that OmiseGo and Ethereum are working on to allow their vision to happen. Plasma is a system that supposed to come out in 2018 and when it comes out it will change the game as we know it, OmiseGo is the first in line to test it. Plasma System should allow a huge number of simultaneous transfers. Currently, VisaCard make 56,000 transfers per second and OmiseGo in a test done with plasma system less than a month ago reached a million! Which is more than 17 times the speed of Visa company. The OmiseGo team is perhaps the best team in the Crypto world and some of the people who can be found there are Vitalik Buterin, founder of Ethereum himself who has often claimed that this is his favorite project in the digital world, and Joseph Poon, one of the founders of the Lightning Network. The team consists of more than 100 people of the first rank throughout Asia. Just listen to the founder Jun Hasegawa talking and that's enough to understand what this quality project is.

OMG, commonly known as "Oh My God Coin", stands at $ 18.75 for the moment, with 100 million coins in a circulation of 140 million coins in total, the coin has already reached a low of $ 7 with the big fall but quickly returned to a steady rise.

The currency has a very solid fan base and since early February the currency has been steadily rising, despite the fact that the company barely creates headlines, but only technological updates. There is a very strong audience of believers for this project and everyone is waiting for the launch of the Plasma system that is scheduled to be released in 2018.

The company is still in the process of development, but according to the company's publications in the middle of 2018, this will be launched to the public. as we approach June we will see a steady rise in price.

As you can see, this is a very ambitious and very complex project and whether it will succeed is the big question. However, if it really succeeds OmiseGo will become one of the most important companies in the world of Crypto. In order for this project to succeed, the company has to invent much more advanced technology than it does today. They have a plan, they have a team, they have support and they have an infrastructure to make it happen.

There are many predictions about OmiseGo, I have a very strong opinion on the subject. It's important for me to say clearly that I am not an economic consultant and this is not professional advice and please do research before any decision you make.

If their vision becomes a reality and the crypto market will remain stable. The currency will make an earthquake in the market. I really don't want to mention prices but if you think of a currency investment with high-profit I'm more than recommending you to explore on - OMG. This is my personal opinion anyway.

Wish an Amazing Day for everyone.

Omisego is a personal favorite I have been waiting on for a long time. I do believe 2018 will be an important and good year for OMG!

This is very informative and I want to follow the links. I have OMG right now and I sure wish they would bring the no bank needed to buy to the U.S.A. but I really liked this one

Thanks @acrowland, If they manage to penetrate the American market, the price will rise extremely. hope so this happens!

you and me both