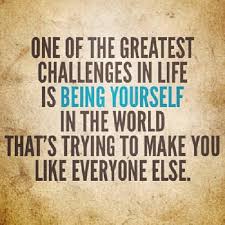 If there's one lesson I've learned coming up to Silicon Valley is that "being yourself" is important -- probably way more important than most people realize. "Being yourself" is an idea that pretty much everyone wants in theory, but is much harder to do in practice since as humans we're all pretty insecure with ourselves and are very much hardwired to take comfort in social trends and norms. In the end, though, "being myself" -- as cheesy as it might sound -- is what got me out of a tough time in my life so I think it's a story worth sharing, here.

Prior to moving up to the Bay Area a few years ago I was doing a Ph.D in musicology at the University of Southern California (in Los Angeles) in hopes of doing my dissertation on the topic of ethics in musical practice. After taking my first qualification exam, I "failed" the test and the panel basically told me not to bother trying again. Technically I had another shot at taking the test again but they obviously did not want me there.

After dropping out of school I started teaching myself how to make websites in order make ends meet, which eventually lead to me learning data and product management as a career path in tech. I'm probably doing better now as a result of having left school (the road to tenureship is no joke, either) but the path to get to where I am now hasn't been easy, to say the least.

For a while I had internalized the idea that I did something wrong on my end and that getting kicked out was a matter of a not "fitting in" -- a failure to assimilate, in other words. Wanting to get away from it all, I moved up to the Bay and started working in Silicon Valley because it represented everything that academia was not -- fast moving, forward/outward looking, lots of smart people around everywhere but most importantly, NO SCHOOL! And for a while, things were pretty good.

Silicon Valley is a strange place where creative idealism and ruthless capitalism collide - Hollywood, government, and academia are all warped in their own ways but SV probably has the highest concentration of institutional absurdity I've seen anywhere else, mostly because of the crazy amounts of money flowing everywhere all the time. There's lots of opportunities to be had in this environment, but at the same time it's a place where one could easily lose themselves since there will always be the temptation to trade-in your values/principals for money/prestige. People do that sort of thing all the time -- probably without even realizing what it's doing to them. I know, because I got caught up in it myself.

But here's the thing: for a few years after I moved up, I was getting all of the problems but none of the perks. I worked a lot of random jobs -- most of which weren't rewarding on any level -- which barely paid what I needed to even stay there. I was too stressed and distracted to really think about anything other than survival, which eventually lead to my breakup with my girlfriend of 2 years up until that point. Making friends was tough since I didn't really connect with most of the people in the Valley, and when I did, they were too busy to do anything on a regular basis since they were scrambling around just as much as me. I tried getting involved with the creative communities in SF but they were either closed off or priced out of the city just because of the extraordinary rent.

When my bank account started to shrink to the point where I had to seriously considering moving away, I sort of had a "fuck it" moment where I just started doing things that just felt good to me on a personal level. That was the moment where everything started to change.

Instead of working on skills/projects that would "look good" on my resume, I just worked on projects that actually excited me. (I started doing volunteering work at Code for America's San Francisco Brigade just because it looked interesting.) Instead of trying to "network", I just started talking to people about things I were actually interested in. I started streaming a few games on Twitch to a small audience, just for fun. I made music in my spare time, where I could.

These things might sound simple and mundane, but when you're running out of money and job prospects are looking pretty bleak, doing these things will feel "wrong", since at that point you're not really feeling good enough about yourself to think that you deserve it. I'm sure there were lots of people who thought I went nuts during this time since someone who's struggling to make ends meet should be spending most of their time looking for work instead of doing all these things for free/fun. In all honestly, that would be the "reasonable" thing to do. But:

I know my experience is probably on the more extreme side but I do think that there's a lesson in there somewhere that everyone can use. The crypto thing was technically a total coincidence but given the timing of things there seems to have been something bigger at work, here. When you're being yourself you set up the implicit conditions for good things to happen to you, even if they might not be directly related to your original intentions.

When the allegations of sexual harassment and bad behavior against USC started coming out a few years later, I started to rethink about my relationship with the school -- the fault was with the institution, not me. While the people I interacted with in my program were probably not directly involved with the scandals, I think subconsciously they were trying to suppress the type of work that would threaten the institution's reputation, even if my work wasn't going to target them directly. Good people can be made to do terrible things quite easily if they're not present with themselves and their surroundings, so there is a moral aspect to "being yourself" -- beyond selfies and self-expression -- that I believe is worth exploring in it of itself. Albeit probably not in the way that they intended, my schooling did give me an important lesson in how ethics works so in that regard I got what I wanted out of the process.

I should mention a lot of people think "being yourself" vs. "doing whatever you want" is one in the same but it's actually not -- mostly because when people do the first thing that comes to mind they're usually just mimicking someone else's idea that was implanted into their mind some time ago. Being yourself is something that takes a lot of work and effort, and often requires you to deliberately go against what feels easy, what seems obvious.

But in the end I'd say that it's well worth the effort since it leads to more honest conversations, better and deeper relationships, and opportunities for yourself that are much more real, and grounded. In this day and age where trust is hard to come by, it might even become a necessity for survival. At least for me, this turned out to be the case.

Beautifully insightful post my friend. Being yourself is a lifelong process, but seemingly one people do not attempt to begin. Best to you in the Bay Area, I am a South Bay native myself and can vouch for the culture being accelerated, which has both its pros and cons. Definitely a place where you need to find your tribe, which it sounds like you're making progress towards.

Hey, thanks for reading!

I'm actually going to be going back to LA in a few months, sort of making a return to where all of this started from. (Need to be around more artist types right now in my life, I think.) It's gonna be an interesting near future, either way.

Congratulations @ryangtanaka! You have received a personal award!