Cox's Bazar is a tourist city located in southeastern Bangladesh. It belongs to Cox's Bazar district of Chittagong division. Cox's Bazaar is famous for its natural beauty. Here is the longest continuous natural sandy beach in the world which is 120 km continuously from Cox's Bazar city to Badcomok. Extended up to Here are the largest marine fishing port of Bangladesh and the submarine cable landing station.

Cox's Bazar is situated 152km south of Chittagong city. Its distance from Dhaka is 414 km. It is the largest tourism center in Bangladesh. A project to set up railway from Chittagong to Cox's Bazar has been adopted. Modern Cox's Bazar was named after the name of Lau Cox (death 1798), who was the Indian military officer during British rule. At one time Cox's Bazar was also known as Panoya, which literally means yellow flowers. Another ancient name is Palanka.

From the beginning of ninth century onwards, before the acquisition of Mughal in 1616, a large part of Chittagong, including Cox's Bazar, was included in the state of Arakan. Mughal Emperor Shah Shuja was fascinated by the natural beauty of Cox's Bazar on the way to Arakan on a mountainous road and ordered to set up the camp here. Nearly one thousand sarabe corksets of his journey took place in the name of Dulahajara Chakariya of Cox's Bazar. Dulhajara means thousands of sockets. After the Mughals, Tripura and Arkan, after that, the Portuguese and the British take control of this area.

The name of Cox's Bazar comes from Captain Hiram Cox, the name of an officer of the British East India Company. The former name of Cox's Bazar was Palanka. After the issuance of the British East India Company Ordinance, 1773 warrant hosting was appointed as governor of Bengal. Hiram Cox was appointed director general of Palakkhi. Captain Cox tries to resolve existing conflict between the Arakan refugees and local Rakhains. And made significant progress in the rehabilitation of refugees, but died before the work was completely completed (1799). A market was established to keep its contribution remarkable, and it was named Cox's Bazaar Market. Cox's Bazar thana was first established in 1854 and the municipality was formed in 1869.

Many institutions have been formed here in the center of the tourism industry. Apart from many hotels built in private ventures, motel tourism centers, there are two five-star hotels near the beach. Besides, there is a zinc market for the tourists. The Burmese market has been developed with bahari goods from Myanmar (eastern name - Burma), Thailand, China etc., along the border. Cox's Bazar houses many tribal or ethnographic populations which have made the city more diverse. Chakma community chief among these tribes. The Buddhist Temple is a sacred pilgrimage site of Buddhist religious people in the Ramu city of Cox's Bazar and its nearby. There are several rare Buddhist statues in the temple in the city of Cox's Bazar. These temples and statues are one of the attractions and centers for tourists. Not only the sea in Cox's Bazar, there is also a river named Bankkhali. This river is very important for the city's fisheries industry. Cox's Bazar is famous as the most healthful place in Bangladesh.

Because of its proximity to the city of Cox's Bazar, Labani Point is considered to be the main beach of Cox's Bazar. There are several large shops in the adjacent areas of the beach, with lots of shops that are an extraordinary attraction for tourists.

Himchari
18 km of Cox's Bazar in Himchari Located in the south. Fragile mountains and waterfalls are the main attractions here. On the way from Cox's Bazar to Himchari, on the left side, the green hillside on the left and the blue waterside of the sea creates a breathtaking view. During the rainy season, the water from Himachharra seems to be much more alive and alive. There is a resort on hill top in Himchari, from which the views of the ocean are unthinkable. The main attraction of Himchhari is the Christmas tree. Recently some of the tourist centers and picnic spots have been developed in Himchari. 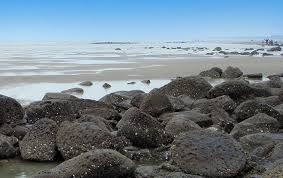 most amazing place in Bangladesh