gringalicious (78)in #photography • 4 years ago

Who’s got the snack snackities? That’s great, me too! Don’t worry, I’ve got ya covered today. 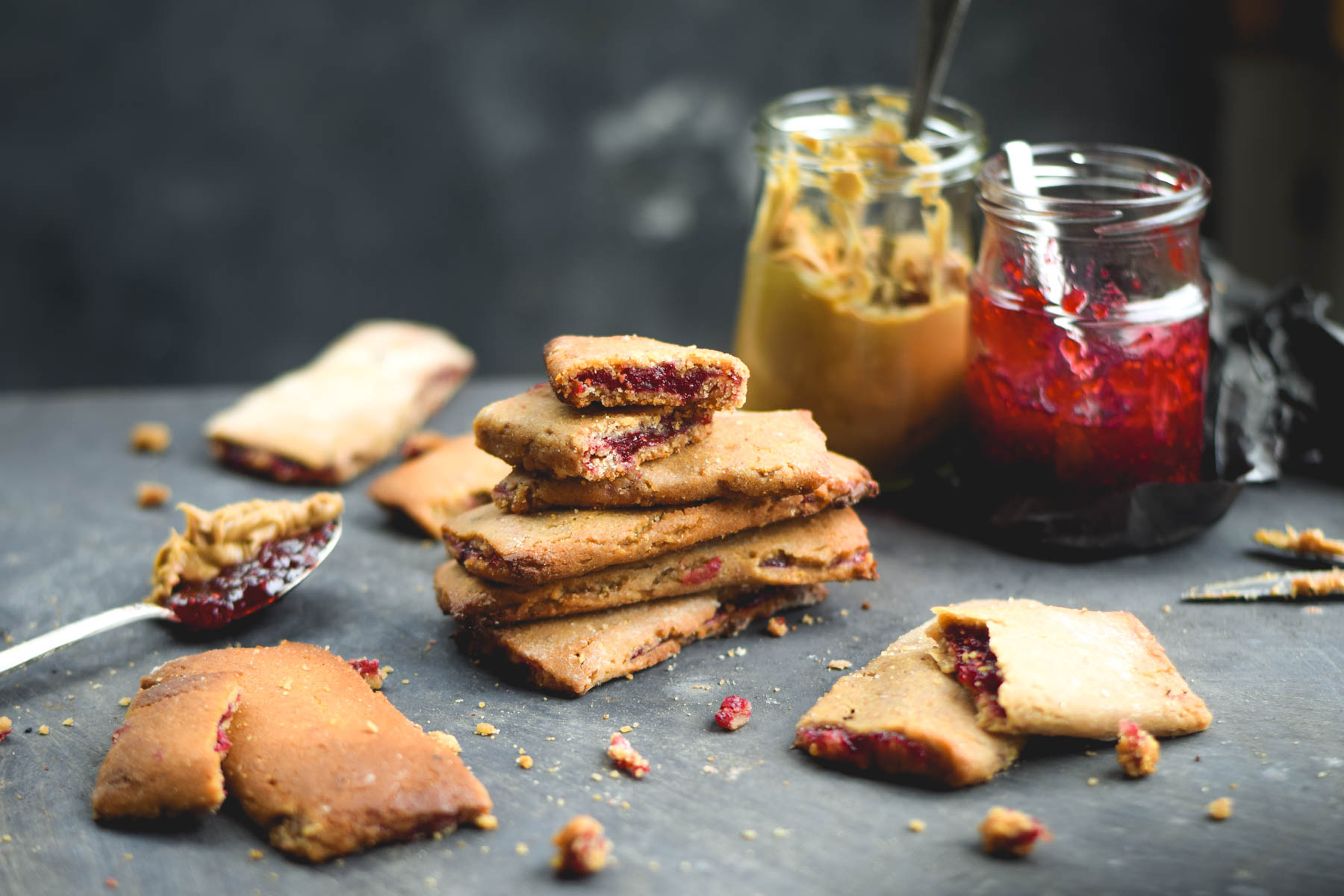 Did you know pb&j sammies aren’t something that’s common outside the States? In fact, they’re really weird to most of the world. When I used to live in Chile many of my friends there had never even heard of one (poor things). To be completely fair, I didn’t eat very many pb+j's while growing up because I was more of a savory sandwich kinda kid, but when I did I was always on team "more-J-than-PB". My sister @uglysweater however was always on "more-PB-than-J". Which are you on? 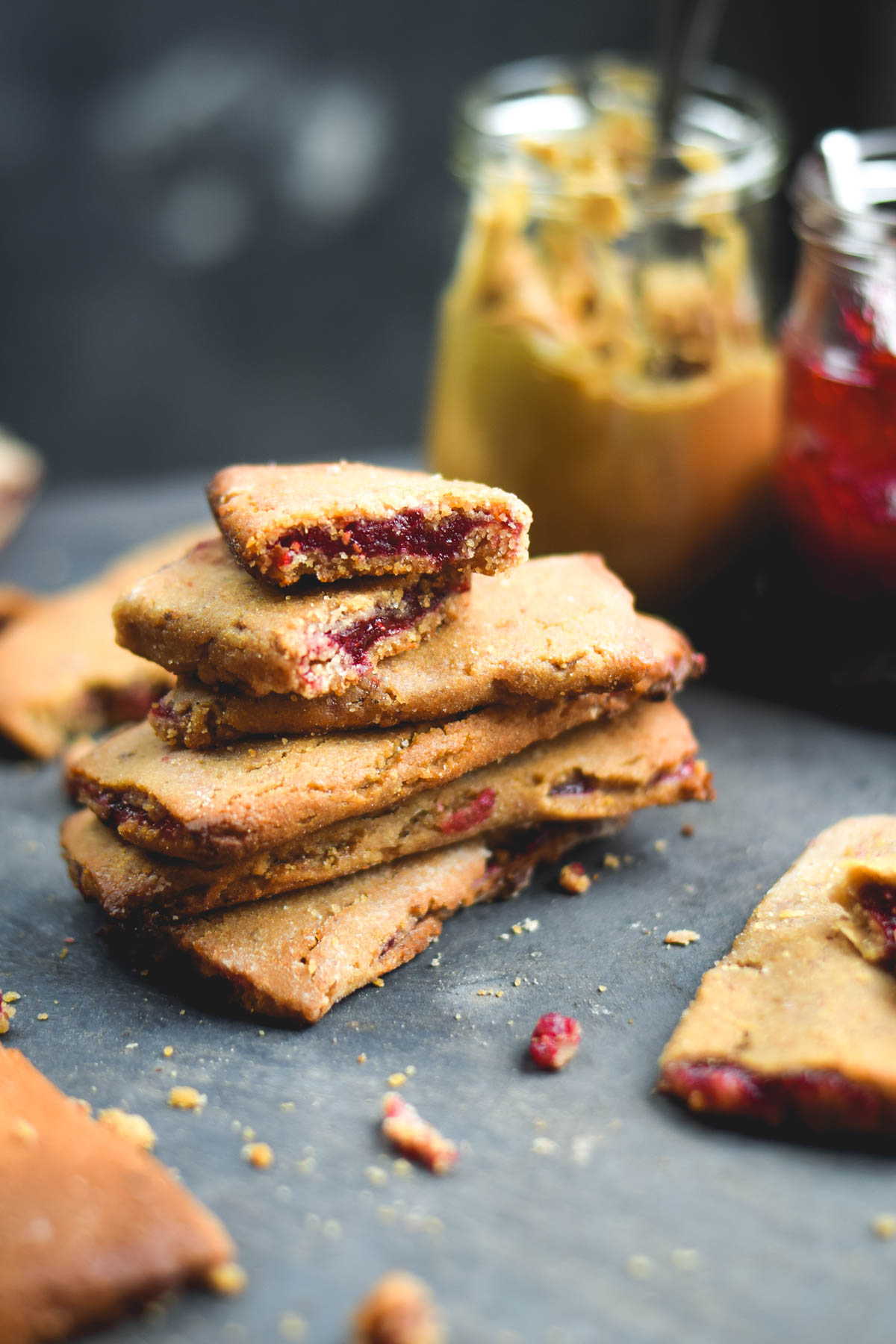 I don’t even remember the last time I ate a pb&j but the flavors have been on my brain for some reason so I mixed that craving with my rice flour inspiration and turned it into a copycat version of the nutri-grain breakfast bars that my the gang and I used to love. They’re kinda like double sized fig newtons too…..only……. with pb! These are pretty simple to make and I went through multiple test batches before finding my fave version. The first rice flour dough I tried was the best tasting but it was just too crumbly to work with so I had to change a few things. Then the second time was better but I had added too much liquid which made them get tough and dry when baked. In this case I’m hoping the third time’s a charm. I found a happy medium between the first two doughs that is great to work with but also bakes into a soft, minimally crumbly, crust. Like I mentioned a second ago, 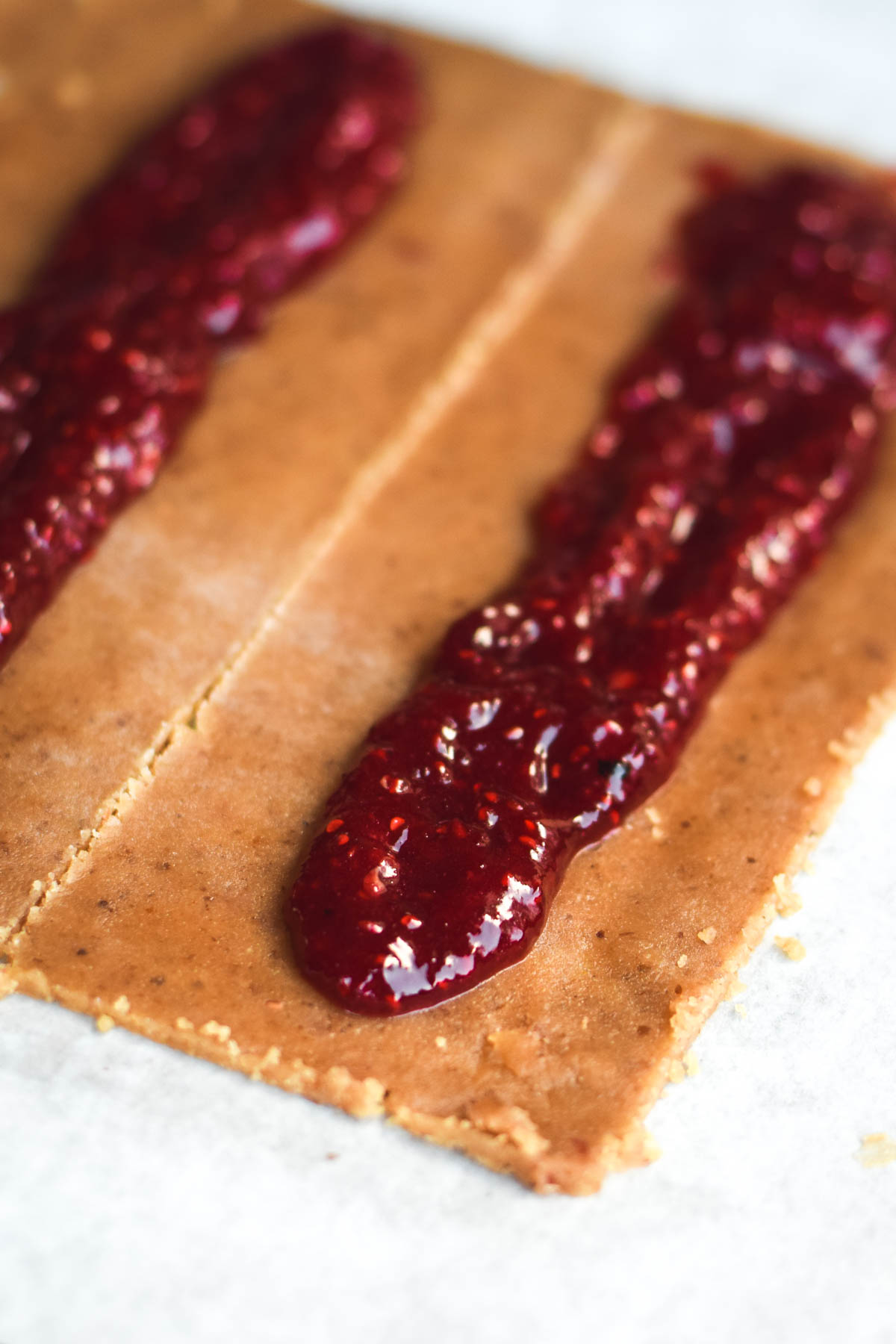 I’m not vegan so I like using dairy and real eggs in baking. I’ll admit, I really thought the egg white version would be better. That’s why I was really surprised by the fact that literally everyone who tried them, even the boys, liked the vegan ones better. Both versions are good though, so try them both and decide for yourself. The filling can be switched to whatever flavor you want, I even tried apple, which wasn’t everyone’s thing but Brock and Sophie really liked it. The sweetness is up to you because you can almost get away with not adding any sweetener to the filling, but it’ll depend on your taste. 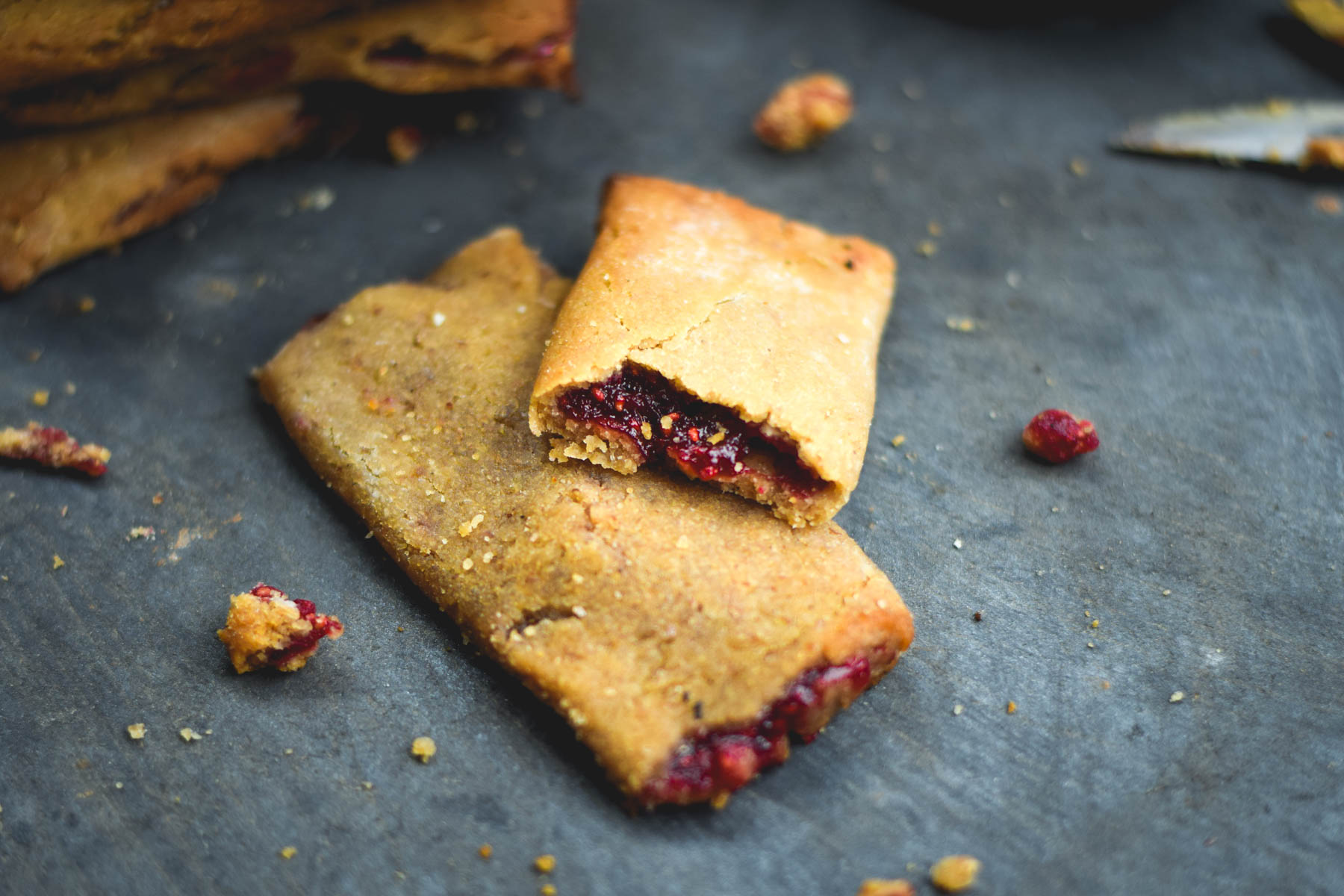 I know most of you can go out and buy cereal bars similar to these from the huge selections at your grocery, but guys, the satisfaction of homemade ones is so worth it. These don’t have any of the ad stuff and you have complete control over how sweet to make them and what you add. ALL CONTENT IS MINE AND ORIGINAL! All of these food photos were taken with my Nikon D5300 and my favorite Lens, the Nikon AF-S FX NIKKOR 50mm f/1.8G. You can find out more in my INTRO POST.

And, by the way, to all the minnows out there, my intro post did a huge $0.21. The key to success on Steemit is to be consistent and persistent.

Also, a huge shoutout to @rigaronib for designing my logo!

Oh, and don't forget to follow me on all your favorite social media channels! 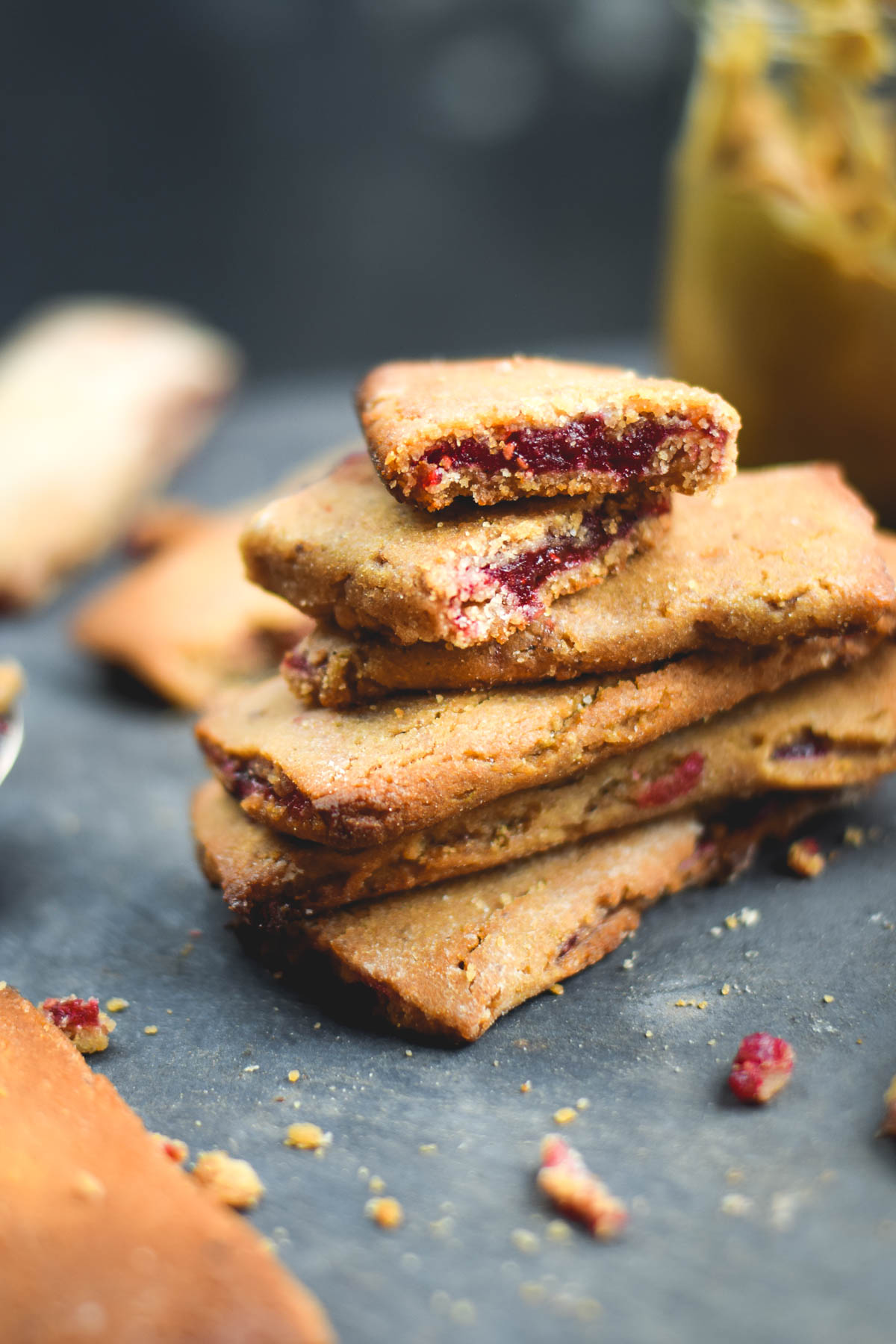 I really enjoy your food posts, they are very genuine presentations and look healthy. These bars look a little tedious but I will love to try them.

so good to hear from you again @sardt

Thanks for following the rules. Your post will be Resteemed by @dropahead!

way too good to not try it out myself...

I hope you enjoy it @theislander, thanks!

Just shared the recipe above. Thanks @spirits4you!

It looks really good. May ask for his recipe?

Yes. It is okay. Probably not my sustenance.
Thanks. 😀

I do not know what to say. You really make all the testy food.i love your post.

Oh, you're too sweet @suchi!

Waooo.. Looking so yumyyy.. Love to eat them.. I m feeling hungry after reading your post.. Thanx for sharing

Glad you liked it @biyanoor!

Still so active, still so successful, still so delicious. I love it.

Thanks @puffin! I'm so happy you liked this post.

These look like they would be a lot of fun to make and healthy too!

The @OriginalWorks bot has determined this post by @gringalicious to be original material and upvoted it!

@gringalicious You've just got me so tasty for some of those, I'm already imagining it. Thanks for this.

I am a sucker for snacks! :)
This looks awesome! Where in the world are you?? I feel like making a trip to your end right now to have some of this deliciously looking treat. @gringalicious

These photos are amazing!!

This makes me want to give peanut butter another shot

They look so delicious! I eat pb&j everyday so I'll have to try and make these! Thanks wonderful pictures you always take good pictures❤️

So nice creative vegan bars, thanks for sharing!

Glad you liked them @chetanpadliya!

@gringalicious payed 3.6 SBD to @minnowbooster to buy a stealth upvote. #photography
I want to know with that where

Thank you so very much @mikeycolon!

Wow! Fix lens Nikon, I have one. Love Nikon!

What a fantastic journey @gringalicious you took here - I have to admit you were one of the first 5 Steemians I have discovered when I joined in August 2016 - my first 7-8 posts did earn me zero cents therefore I left and only @steevc was convincing me to try it again from December 2016/Jan 2017 onwards - you been still one of the role models at that time and you still are. Sadly we had not much interaction - probably as I only write about food when I am in the mood of cooking but love your posts. Next time Steemfest I would love to meet you - seems you are really a nice person what I heard from people that met you! Namaste! Happy New Year 2018! And keep your posts going - these are all of high quality! Thanks for that even I am not always the target group - but they are great!!

Oh, I'd love to meet you at the next Steemfest and thank you for your support @uwelang! I'm so flattered and happy to be an inspiration. Happy New Year.

Thanks for replying - I am flattered because of this. Happy New Year and stay as you are - with your content I am pretty sure you are indeed the one that creates this - not a team hidden under shadows as other accounts do it that even get circle jerks - your content is you, it shows personality and is no bullshit which too often lands on trending here. Take care!

@gringalicious payed 4.0 SBD to @minnowbooster to buy a stealth upvote.

You need always to experiment till you get the right recipe that you like. They look yummy and I am sure they are. The photos are also amazing. Great shots :)

Thank you for the receipe and delicious pictures, as usual :-)

Thanks so much @kristihh. I hope you're having a great Tuesday

Wow! It looks so delicious. But I see myself gaining weight just from looking at these bars :D

these are great for weight loss, if you use the right ingredients

Your posts are delicious

looking so yummy, maybe more delicious in eating, i hope in next blog you'll a recipe too. And happy new year to all.

Your welcome! Am following, upvote you. I'll glad when you follow me. And see my introduction and life story. Thanks https://steemit.com/introduction/@saadbwaqas/my-6-years-of-a-journey-towards-successful-businessmen-read-my-whole-story-for-motivation

Those look so good ! They almost look like nutragrain bars lol

Yes, they were inspired by the popular nutrigrain bars @stevenalexander. Thanks!

It is a delicious recipe at the beginning of the year

Very kind of you to say @allesia, thanks so much

looking very delicious and your photography is really outstanding and worth-seeing @gringalicious I would like to share my own photography with you https://steemit.com/photography/@irshadhussain/some-of-the-most-spectacular-photographs-of-mountains-around-my-hometown

I made the cookies following your recipe and they were delicious! Thank you

did you take any photos?

Cheers Ginga! This is right up my taste buds' alley. Putting this in the magazine this week to remember. And hope to get my moms and her sisters into the Gringa flavors.

I thank you for all the delicious recipes and pictures!
Happy New Year, my friend @gringalicious! Good statement "The key to success on Steemit is to be consistent and persistent"...
Good advice for stay on Steemit...
Thank you....
Success is always for you @gringalicious....

Amazing and healthy too wow i loved the photography

You are very welcome. I'm so happy to have inspired you @triptybarsha

looking so amazing and delicious

This looks good as hell! Love this post, keep it up! https://steemit.com/@muscleroast.com

Food is my favourite ...This is delicious food..Thanks for sharing...

So happy you liked it @nnajmull !

What an awesome post! These look delish! Looking forward to trying this recipe @gringalicious! THanks for sharing! Excited to follow you!

Those look delish! I love peanut butter and jelly!

Thanks so much @lifes-a-donut. I hope you're enjoying the snow