I have to report that I was witness to some crazy happenings.

Happenings that have since been playing on my mind, much as this jiggery pokery did.

I was strolling down to the bank through our beloved Sheffield city centre yesterday morning, when I was jolted out of my thoughts of cotton buds and Danny De Vito by a flurry of movement to my right.

I whipped my head round in surprise, and a little irritation.

I was met by the furtive glance of this man, who was clearly in the middle of hot heeling it away from something or someone. 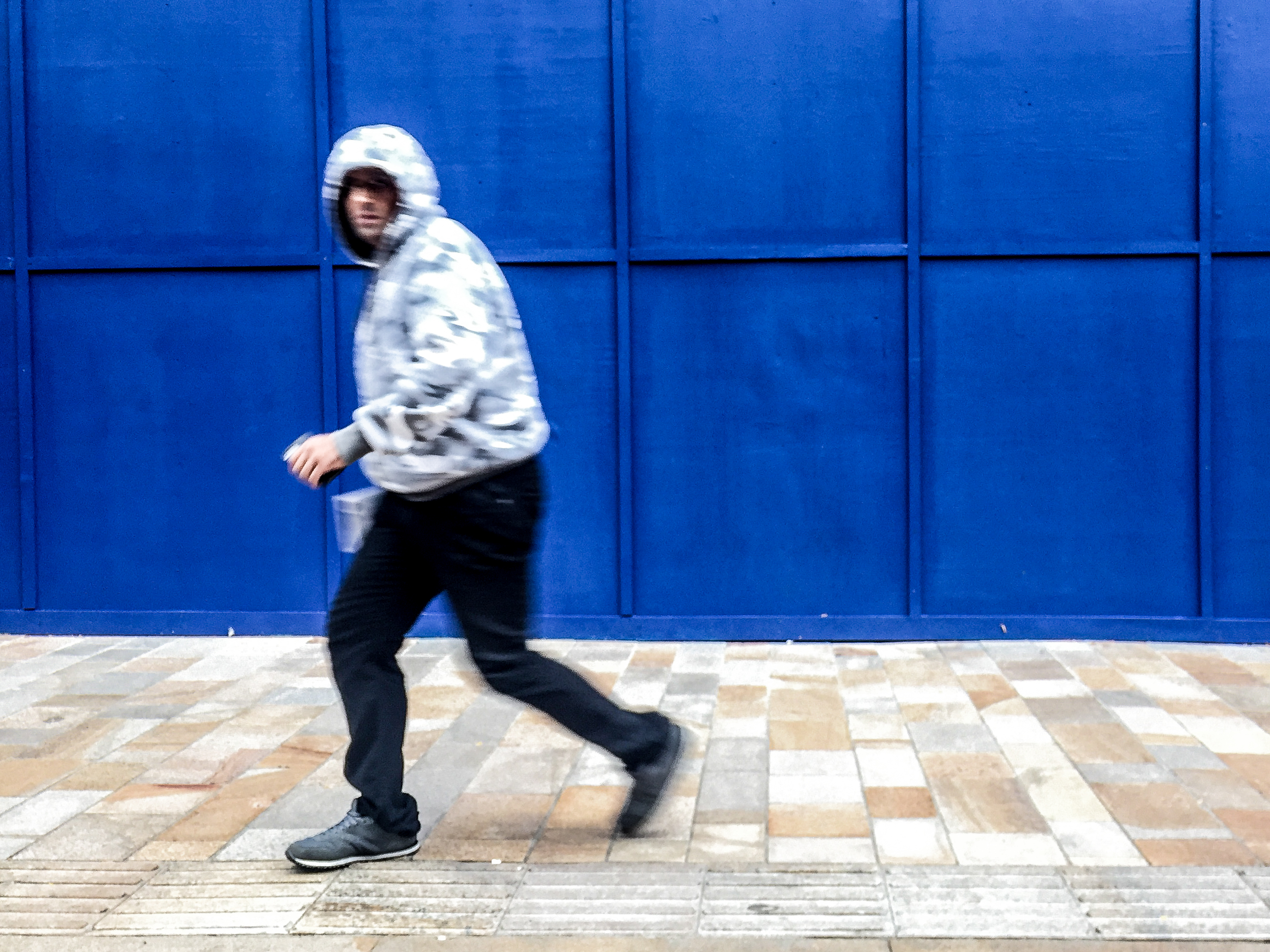 Our eyes locked for only the briefest of moments, before he resumed his strange, lopsided sprint down the walkway.

Being of a naturally curious nature, I of course turned to see what it was that had him fleeing like a rat leaving a ship.

And then something completely untoward happened.

If any of you have seen Inception, you'll know what I mean when I say that the world starting to tilt and turn and turn itself inside out, right before my flabbergasted eyes.

It was a struggle but I retained a modicum of balance and composure. At least, I did until the loud roaring noise started in my ears.

People around me started to shout and point.

God knows what they were doing.

But in one second of clarity I saw the cause of all this bedlam.

It was this guy. He was striding purposefully forwards, not the slightest bit bothered by the world turning inside out. His calm eyes were fixed with determination on one thing only - the man who was running away.

He was clearly a man on a mission, not to be trifled with.

I don't know whether he caught his prey, or if he did, what terrible judgements were laid on the poor fellow.

Anyway, it really was an odd turn of events, completely unexpected for a weekday morning.

I had to pop into Debenhams for a cuppa and a jam sandwich until the world turned the right way round again.

The No-Bones-Just-Stuff Ninja of the Night

what a mad story and great multishot narrative ! excellent work weeja and thanks for posting in street photo.. you are becoming brave photographing people and that's to be commended. stay frosty out there. some people don't like being papped. especially if they're up to no good !!

Haha! Stay frosty..... I shall indeed. That really made me laugh, I've not heard that phrase for ages. :)

I was being fairly inconspicuous here actually, just sitting on a bench with my iphone, so I think I got away with it. Yeah, so not really getting braver... just sneakier lol. :)

I like it. sneaky in your sneakers. It's easy to be sneaky with a phone, which is great for shy street photographers but also in delicate situations. sitting like a spider seems to work for you. I often find just walking the street I'll see something and try and catch it quick.. like this floating tube today in W1 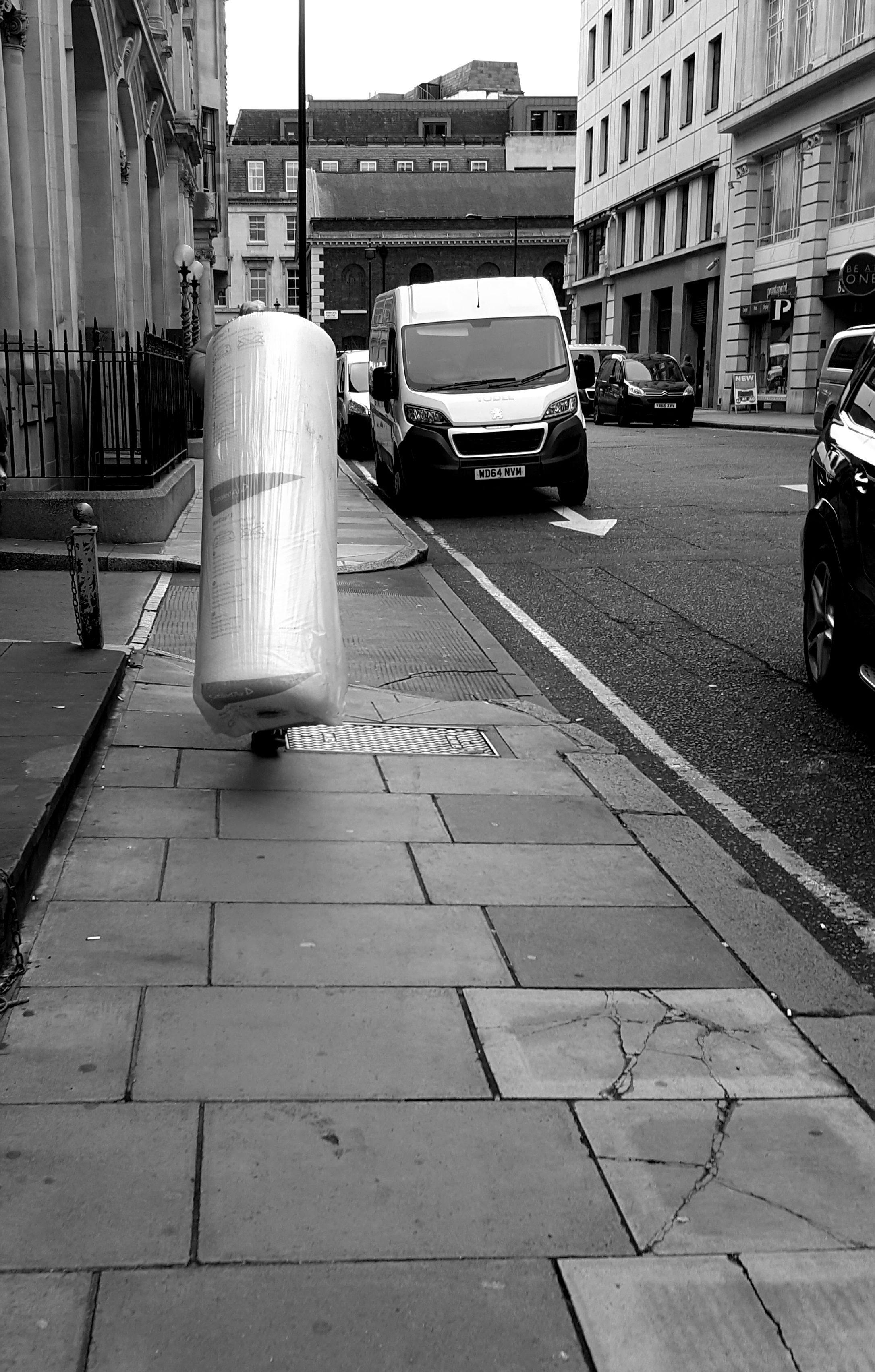 ooh great catch! It's not often you see floating tubes hanging around on the streets haha! It's funny that you said sitting like a spider because I literally just did a post about a spiders yesterday!

Yeah, I'm planning on upgrading to the iphone 8 when it's out so it'll be good to see what the camera's like on that. But I'm still gonna get myself a proper camera soon too. A Ricoh just went for £300 on ebay... I was kicking myself that I didn't have the funds on that day to put a last minute bid on!

This was a great post. Thank you for sharing. I'll be sure to keep an eye out for you future work!

Thanks for popping over, glad you enjoyed it!

That jam sandwich from Debenhams always puts the world to rights!!

Sorry for the late reply, gotta lotta catching up to do with replying to comments!

I think that may have to be the plan!

We at @adsactly find your post quite odd and therefore very interesting :)
You seem to have an awesome imagination and perceive people from an almost artistic point of view!

Please accept this small token of our gratitude and be welcomed to our ranks here: ADSactly

Your post was upvoted by Keyholder North, rewarding you with 4,2$

Keep up your awesome work!

Hi, what a lovely surprise! Sorry for the late reply, and thank you very much!

I'll pop over and hang out in Discord, thanks for the invite. :)

I So love your writing style!! Great story. You conveyed the emotions perfectly

Aw thanks very much!

Was the guy doing the pursuing echoing Stewie from family guy?

That's funny, I could've sworn I said have it today....

I like it, what is Debenhams. Post apocalyptic fiction is cool. I hope you have a WONDERFUL day! 😀 😃 😄 😁 😆

Debenhams is a department store here in the UK :) You have a great day too!

Jiggery pokery that a saying I haven’t heard in years, it is clearly not used enough :)

It's just not possible to use the words jiggery pokery enough!

I agree but we should make an effort to ensure they are abused more often :)

Haha! Yes I think we should make it our goal to inject more jiggery pokery into thealliance!!

Well we have a plan then :)

It's funny that you used Inception especially when you had to google who Christopher Nolan was some time ago hahaha!! Don't think that I'll ever live that down :D

That guy really does look shifty, but the calm and collected guy looks even more suspicious considering the ground is tilting and the loud boom can be heard through multiple movies!! I've seen way too many murder mysteries to let that one slide. It's almost always never the most suspicious looking one!

Haha I know right?! Such a philistine!!

Oh yes, it's always the calm and collected ones you have to watch out for!

It is really weird but captivating short story :)

Thanks! I think I was in a bit of a weird mood!

I like your storytelling. Reminds me of Cosmicomics by Italo Calvino. Funny and otherworldly, full of surprises.

Hey I just popped over to your blog and I see that you've been eating raw! I used to be a raw food coach many years ago... it's not something I've done for a while now. But yes, raw icecream is the absolute bomb. And there's nothing like giving your kids delicious stuff that they love, which is 100% full of healthy stuff.

I remember we bought ourselves a raw cake one Christmas as a treat - it was chock full of superfoods. One slice and you were buzzing for the next 2 hours!

Yeah, I still remember a certain raw key lime pie from years ago, and maybe I'm still buzzing from that one. 🍰 Yes, I'm really enjoying raw foods. I imagine there are great opportunities for a coach like yourself, since it's such a radical difference from the standard diet.

Could be, I agree with you.

Haha, you could be!

Ah I'm not doing that any more. But I do know a couple of people who are and they are doing very well. :)

What do you mean by buzzing LOL? Want a boost? Minnowbooster's got your back!

The @OriginalWorks bot has determined this post by @johleen to be original material and upvoted it!