The town boomed for all of them…

for lumber, mining, and for the building of the
Great American Railroad. Men came from all over the world. Most came for the jobs but one or two came just to see the sights and in 1926 there was one crazy Aussie named Al Faucett who came, saw, and decided to ride the rapids of the River where I live.

Al Faucett came to Washington State to lumberjack and to run his own small logging company. In 1926 Fox Films wanted a daredevil to shoot[def.] Sunset Falls in a canoe for a movie scene where an Indian was supposed to go over the falls in his canoe. They offered a $1500 prize to the man who did it. 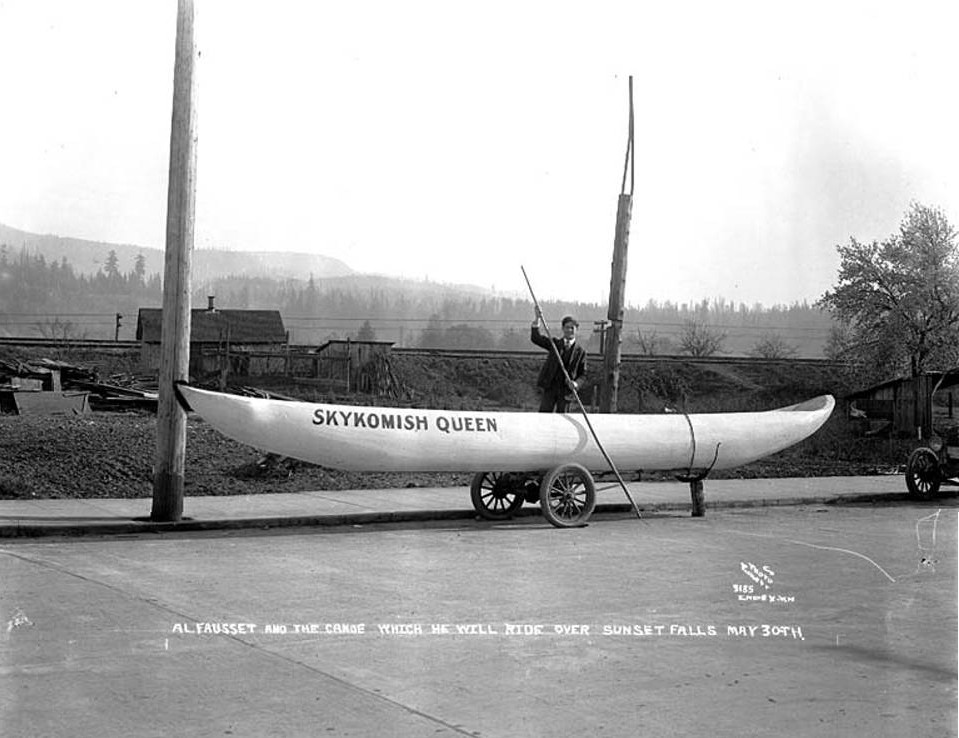 Al Faucett was the only one to volunteer but he didn’t think that the canoe that Fox was willing to provide was adequate to the stunt so he made his own with metal lining and extra padding, and a tarp to cover the top and keep the canoe from drowning. Unfortunately it wasn’t the look that Fox had in mind...


...so they reneged and he couldn’t collect the bounty.
He shot the falls anyway. Pickett neg. 3211
3000 people shelled out $1 each to watch the big event. Al Faucett is the first man on record to survive shooting There have been a few kayakers who have done it since but there is no public access now[ref.]. 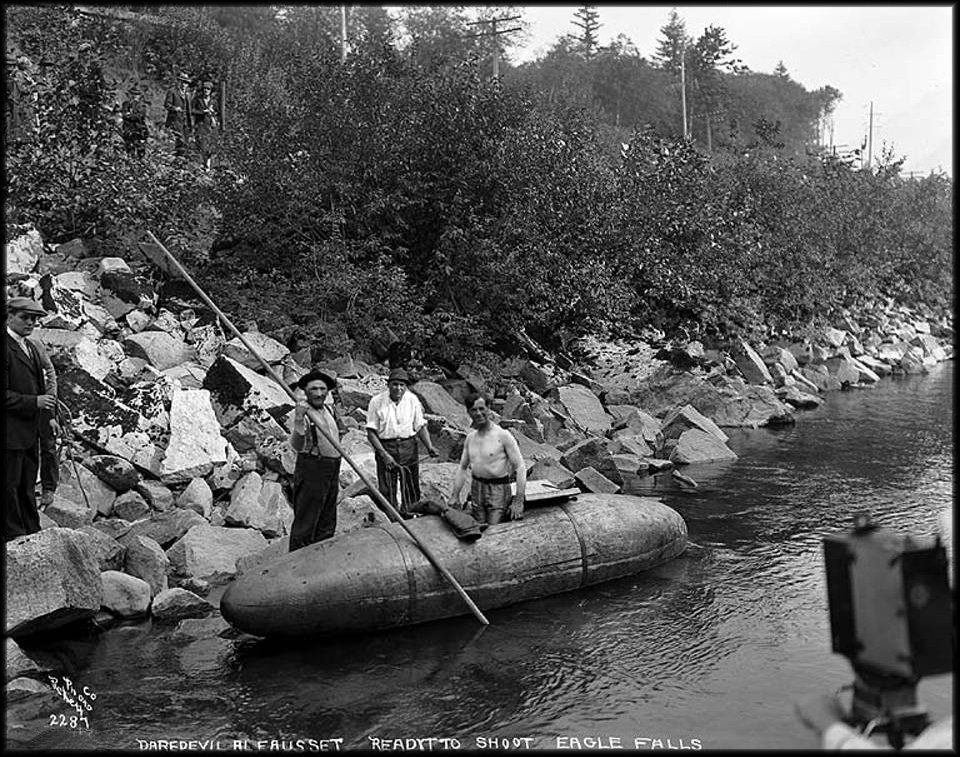 Because he felt that there still wasn't enough safety features, Al Faucett made a second canoe from a hollowed out log that he banded together with steel for his next adventure when he shot the Eagle Falls. You may be surprised to hear that while he continued to shoot other falls up and down the upper west coast, he died in 1949 (in his 70’s) of cancer. He never made it to the Niagara Falls, which was his ultimate ambition.

[def.]: To "shoot the falls" means to intentionally ride the river down the falls. It can be within or without a boat or barrel.

]]
Thanks @vcelier for helping me find it!

Lee Pickett was a photographer who came west to open a photography studio and soon contracted with The Great Northern Railway Company to record the building of the Great American Railroad. He stuck around our area afterwards and took thousands of photos (that have survived) between 1909 thru 1949, making a record of a heap of history that we otherwise wouldn’t have access to. I so appreciate following the guys who follow their passion when it is far from the easiest thing to do!
If you want to read more about Lee Pickett or see more of his photos, check out the University of Washington online archives. Just be certain that you have the whole day free and you turn off your phone first. If you’re a big fan of old photos like I am you will likely want to stay a while!

What a great piece of history. I just love photo archives, too.

I'm a fan of the Great American Railroad, too. I lived for a time in Hillyard (which is now a neighborhood in Spokane) that was founded around the rail yards there.

Thanks for a great memory.

Al Faucett is the first man on record to survive shooting Sunset Falls and as far as I can find, he is also the only man to do it.

Thanks! How could I have have missed looking at Wikipedia? 🙈 The most newbie mistake! Still learning 😊

Google "rob mckibbin sunset falls" and you will find a video that is quite impressive.

Fixed! Thanks again. Will look now.

Is commenting really worthwhile
Your Reputation Could be a Tasty Snack with the Wrong Comment!

That is so interesting! I love that he had to do it again and again and again! lol. It's a shame he wasn't allowed to collect his bounty but at least he lived because of his safety designed boat and got his named remembered through history for surviving such a dangerous act.

I think he may have got some of the proceeds from the people who bought entry into watching the stunt. The article I used said that one of his later events netted him $750. He had a son who was interviewed after Al died so he isn't totally lost to posterity and Mr. Pickett, the photographer, is considered a 'famous' local. That he photographed Al undoubtedly helped. Lee Pickett has some amazing photos and I'm really glad they survived.

Honestly this just amazes me that people decide "hey I'll be the first person ever to do this completely crazy risky thing that very well might kill me".

It's even more insane than you might have imagined. I saw in an add that had been put in the local paper to advertise the stunt that 20 men had died in the falls previous to this attempt. I guess you might say he was crash-testing new safety equipment!

Amazing bit of history and I love that log canoe/kayak thing. I love water but I would not want to do this. I have had fun tubing rivers though where you tie tubes together and have one with a cooler for drinks and food. It's more of a lazy meander on a not day then a challenge in any rapids. This is really cool though, and sad the man died from cancer.

On one of his rides, Al Faucett ended up having a concussion, broken wrist, and a good number of cuts and scrapes but he continued to do it anyway. I don't understand it but there you go.

To be philisophical, is one way better than another?

(click to enlarge)
I just hope that I don't live a long maimed life!