Shaking hands with the next UK Prime Minister? Following up on my article I recently did about the effect a hung parliament would have on the Bitcoin and Alt coin prices https://steemit.com/cryptocurrency/@carface/spike-in-price-for-bitcoin-and-alt-coins-most-likely-on-june-8th I decided to visit a local rally only a few hours ago today where the Labour candidate Jeremy Corbyn was campaigning to become the next Prime Minister of the United Kingdom.

It was absolutely pouring down but we still got about 100+ people standing out in the rain waiting to hear him speak. 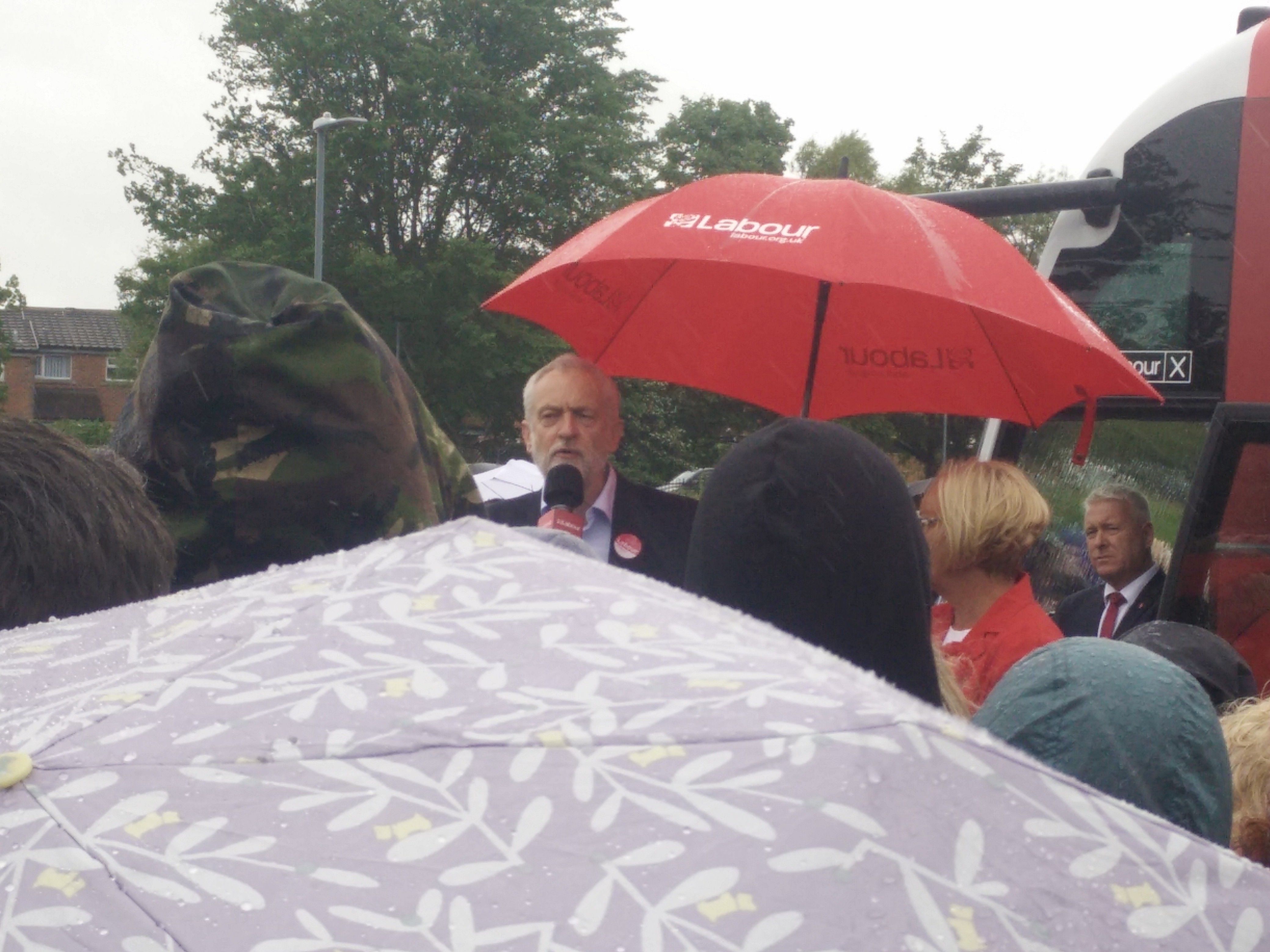 I was very impressed in not only what he said but how he engaged with the crowd. He is a socialist leader with his party slogan being ‘For the many not the few’! Now this captures exactly what he is all about. I genuinely feel he wants to help society rather than the elite few. He has been campaigning for this for years, that’s why I'm finally actually motivated to vote for an actual politician! Wow!

His key message was being a community and re balancing the gap between the rich and the poorer. He also talked about raising the minimum wage to £10 an hour, scrapping tuition fees which has been a huge financial burden for young people just starting out in the world, banning zero hour contracts where big corporations have taken advantage of workers, guaranteeing the triple lock for pensions stays in place, increasing the funding for mental health and adding 4 more public holidays a year which is a nice little extra bonus. He will fund most of this by asking the top 5% of earners in the country to contribute a bit more tax, which is a relatively small amount for them but will have huge positive effects for society.

Overall this is a potential Prime Minister who cares about people, and it really shows. Many politicians have laid out how they will help every person in the land but this time we have a man with substance and someone whose core beliefs represent what Labour is putting forward in their manifesto.

June 8th 2017 is the date the UK could genuinely start changing for the many, and a Corbyn Prime Minister I believe would be a huge step in the right direction for the good of everyone!

I wish him the best but remember a Politician gonna be a politician....they always talk about balancing the gap between the rich and the poor....I love the UK, its my colonial Mother but she has lost her way...lets see how it plays out.... as I tell folks, nothing is random about these so call sporadic acts of violence happening now, its meant to influence the election... keep an eye on the interest groups highlighting them during their campaigns videos.... they most likely are the ones financing it..most of us would keep our eye on a snake for fear that it bites us, you should always do the same with a politician

Absolutely we have to wait and see what happens. What make's this guy just a little bit more different to most of his fellow politicians is that he's campaigned all his life against the elitest few. The majority of his party did not want him as their leader and he is basically an outsider in the Parliament bubble and many of his own party have been trying to get him out. They know he's a threat and won't toe the line which he has proved since he became leader of the Labour party. The current government is not for the people and everyone knows it, it will be very interseting to see if he comes through with what he is planning for the UK.

The UK is bigger than its politics, I hope it realize it. We still have lots of love for the Queen in the Caribbean. i just feel that it has lost its way. Time to portray itself as a global leader and get above the politics. I have no problem with elites, they have served the Kingdom well, my problem is the ship has no captain and the dirty politics has taken mainstream. They have now started imposing visas and increasing restriction and the propaganda has taken new highs. The UK has lost ground with its colonial children and the kingdom would only rekindle its fire when it rekindle its love for them. It is time that it realize its allies are not the ones that it is most loyal to. It has lost most of its vibrant trades routes and sadly it has not maintain trades routes with its children. Within the European Union it lost the opportunity to become the financial center, there so is much going against it. The present politician has no sense of history and they are consume with self and not the kingdom. We should never forget history and that of bartering, the kingdom built wealth on it, the Caribbean use to be an Industrial center for it, its all lost and its been steady decline

Yeh I agree there has been decline in the UK for many decades now and it's sad to see. Corporate greed will be corporate greed and governments have bowed to it for fear of busineeses going elsewhere. Governments have the power to stop or lessen the excessive greed if it looks after it's people first instead of whats good for corporations first. We are a ship without a captain like you say and I feel the UK does need to get it's British balls back! :)

Thanks @siersod Corbyn is doing this for the people, I just personally don't get that same feeling from Theresa May unfortunately.

Yeh it was a good day, he came across very well! Have you seen the crowd he's got at the Sage at the moment? Just seen it on the news.