I am by no means good at predicting prices, but I have managed to get it right a couple times on chain (There's also a post somewhere saying 7 cents was the bottom in 2017 with some proof of buying that dip at the time but couldn't find it right now). Unfortunately I was not as good at selling the top, maybe I'm too invested in the currency and biased in the platform or just really didn't expect it to have this big of a downturn. Of course there are also other powers that lead to this steep decline, Steem's progression of development due to Steemit being a bit slower than many imagined, probably due to the layoffs, mismanagement of funds but part of it was also due to the refocus on the scalability of the chain (MIRA) which I hear is so much better for future. In hindsight I should have sold a lot more if only to buy back more (and if Steemit had done the same we would probably be in a better position as well, although many would instead have picked up pitchforks as to why Steemit dumped more at the top and are now buying more stake again which goes against the distribution - i.e. there's always two sides to everything, people just don't think about the other outcome and like to blame things as they are right now), so with me not calling the top right nor the bottom once when I bought back and powered up about 20k Steem in march-april 2018 at 10-15x the current price, keep that in mind when reading the rest of this post.

Also sorry for the long sentences, rereading it I realize how annoying it is, english is my 4th language and I think the german in me likes to keep sentences going forever.

So what happens now?

I don't know how many are on Steem now that were not pre-ATH but those who were may remember that many alts were in the same position before BTC started rallying in late 2017 and many of you may also remember that things get moving rather quickly once they do. Anyway, without further ado and based off of a few things I'll mention real quick here is how I can see Steem performing in the not so distant future. The basis of this is considering what happened in 2017, once Bitcoin gets higher or back to ATH we will either start seeing successful alts (successful in their developments/growth/scalability (not price)) rally with it and potentially outperform it. People say "there is no guarantee the same thing will happen cause people are "smarter now", no, don't forget about the human greed, no matter how much they make off of BTC, once it starts going back down they will most likely gamble back on alts, Steem having one of the latest pumps than any other alts at the time could mean it might behave the same way this time around. "But there are stablecoins now which they rather trade their BTC off to during a downward correction", yes but you're forgetting greed again, stablecoins can't go up, FOMO from others choosing good alts instead of stablecoins will also fuel the altseason. Bitcoin's LN has gone nowhere in 3-4 years, there is a big chance of many alts outperforming Bitcoins potential growth and ATH, but not the marketcap (maybe Eth if they get their shit together but seems as though their time is starting to run out at current speed).

Here are some graphs predicting if altseason were to occur based on past performances: This is a recent one showing altcoins market dominance

No sources to who originally posted these, sorry, had to dig them up by scrolling through discord chats for longer than I'd like to admit.

Now here's the best case scenario for Steem and what were to/could happen for it to come true:

Think of Steem as a waterfall on an unending mountain and it's giving drinkable water to countless towns, cities and powering up their people who in turn can use that power to create more things and their own waterfall and reach places where the original waterfall did not even know existed but they still learn later that that's what made this possible.

Here's Steem's chart from 2017 and before that:

Now the chart from today:

Not doing so great in satoshis, eh? Good news is that even if we do worse in Satoshis next Bull run we will still do pretty good as long as development, growth and potential is still there and no other similar chain surpasses us (then again there are many popular social media platforms today too so not the biggest woop).

If we manage the best case scenario mentioned above though, if all the puzzles fall into place just right, then 2020 and forward could look like this (my traditional prediction like in the post linked to in the beginning of this post, might do one of these each "end of the bear market") PS! Drawing the lines on a laptop touchpad so chill your OCD.

Obviously time is relative in the drawn part of the chart but hopefully we get to start seeing it in 2020 and forward. And of course this is not financial advice, do your own research, don't blame me if you get it wrong, I haven't been doing all that great myself, etc, etc.

If you wanna draw your own predicitions in the comments on MSPaint like I did, then here is the chart above but empty with the future part

Let's see what the future brings, get yo popcorn ready!

Price is just one indicator. Since I arrived here in 2017 I have not powered down once. I believed in the platform then and I still believe now. With new SMT's, tribes, SCOT's or any other niche communities, the future is really bright and it doesn't solely rely on @steemit to make it happen. The concept of this platform still remains one of the most revolutionary ideas in crypto, it has just taken a little longer to find its footing. I just wish I had a bit more money to buy more Steem at these prices. Price predictions aside, Steem is highly undervalued, there are brighter days ahead

It's time to climb. We deserve it!

A higher price will also mean so much more development, pace, activity and funding being enabled, it's gonna get exciting!

Best Steem TA I’ve seen all day, plus signs of altseason are definitely showing up on the markets just in time for Q4... something tells me your right again !

You and I both wish this does great. So do most people here. Love the optimism.

Just when I wrote a decent* comment. Battery: Fuck You

English is your 4th language? WOW! You're great at it =). I'm not so good at markets, but I do know STEEM is a bargain right now.

I'm gonna keep dumping FIAT and getting that $TEEM!

Have a great day,
~ @cadawg

Dumping fiat for steem on my way to dolphinhood, Boom!

tea noises
Almost halfway there for me!

I am so ready for that ride at this point! :^) Steem will spearhead the next alt-season :^)

Worst case scenario still sounds better than this scenario :^) although can't complain from a 10% rise in the last couple of days xD

I'm hoping for one more big dip and then a slow crawl (a year or so) to a nice round number.

You do have good points.

I am 76% confident that Hf21 and the ensuing layer 2 upgrades will set a new phase where Steem has some marketable news (along with user word of mouth) that'll pull in new users again.

Remember that people also laughed at this graph at the time. ;) 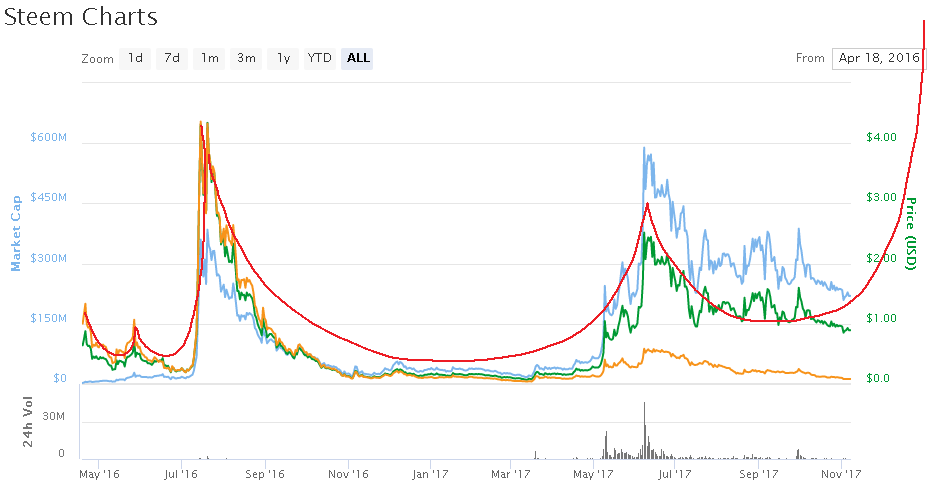 Then this happened a month after. :3 After reading How to meme bitcoin to them moon and understanding the power of meme magic.. Can I even dismiss this anymore?...

@ocdb is a non-profit bidbot for whitelisted Steemians, current min bid is 2 SBD and max bid is 12 SBD and the equivalent amount in STEEM.
Check our website https://thegoodwhales.io/ for the whitelist, queue and delegation info. Join our Discord channel for more information.

Would love to see some price action happen over the coming months and the higher it goes, the more development the DAO can fund. Welcome to SteemIncome a lifetime Upvote Service to increase your post Reward. You can get daily upvote on your post by just Purchasing SI Shares. You can purchase "One SI Share in 1 Steem".

I think there is far more trepidation in the altcoin market than there was back in the last bitcoin run so I wouldn't expect people to throw money into altcoins this time around anywhere near as much as last time. Use cases and utility still don't seem to lead to price rises in this market either, if they did then I'm sure we would see higher prices on many of the "useful" coins out there but we don't.

I think the future is bright for Steem as a platform but i personally dont see any real mooning going on until utility represents price across the whole of the crypto market. When will that happen..... who knows.

I believe we have hit the bottom and we will only go up price wise from here.

Congratulations @acidyo! You have completed the following achievement on the Steem blockchain and have been rewarded with new badge(s) :

I believe we can't be that low in price much again and going up back. Even this late this year, we can still recover much more in price

That is my dream. lol