UNEXPECTED FLAG DOWN FROM troglodactyl

aaalxnovaphobia (30)in #report • 4 years ago

To all my followers & Upvoters

Plz tell me how to report him? 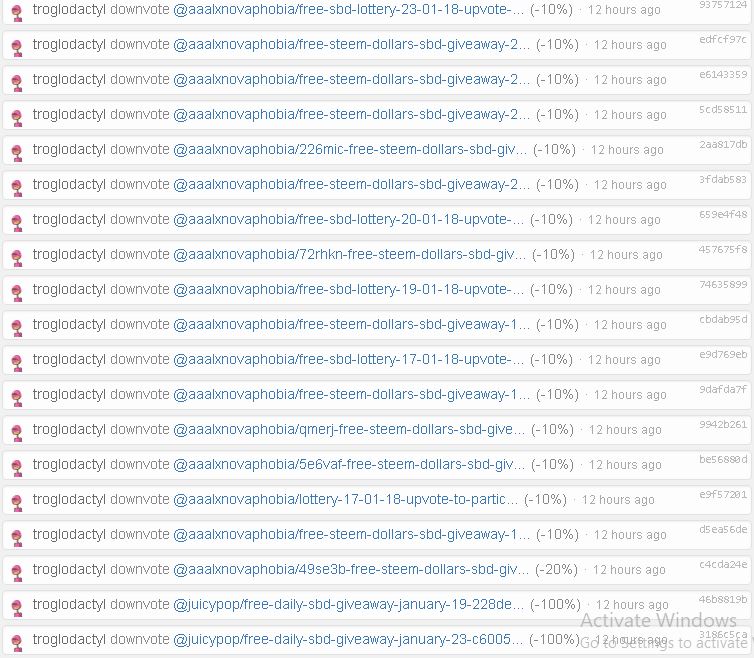 I gave a warning explaining that what you're doing is abuse but you ignored it and continued with no response. Now you're downvoting my posts that are in no way abusive.

I am trying to raise awareness about the sort of abuse you've been engaging in, so by all means report the situation to as many people as you can. If you aren't clear on why what you're doing is destructive, read this: https://steemit.com/steem/@troglodactyl/is-steem-a-ponzi-scheme

Nah, you just suck. Why are you picking on new members? aaalxnovaphobia is just lending a helping hand by giving back to the community...Do you think us minnows really have that big of an impact as the rest of the community? How about you pick on someone else your own size? How many time have us minnows been attack by those with more influence on steemit? Too many. You're just a bully pretending to be a hero.

thnks for your support @tntdabomb

Anytime. Too bad our votes and opinions don't really matter. Steemit only favors those that have more influence. I haven't been here long, but I know that much.

Lucky for them, im not the creator of steemit :D

If no one downvoted and enforced on steemit there would just be contests, upvote posts and trevon james...wrote a post about it https://steemit.com/steemit/@marketanalysis/why-you-might-not-be-getting-free-sbd-giveaways-anymore-or-they-are-being-down-voted

GL downvoting his posts...he has been in this for a long time..he is a crypto OG...go look at his account..he can ruin any of your accounts.

I can easily build up my influence via money if I wanted to, but I will only do so if someone is abusing their power. For now, I will build up my reputation the traditional way

The sort of new members a community attracts and the habits they develop have a massive impact on how that community develops, yes.

Calling me a bully and telling me that I suck without offering any counterargument to address the reasons I provide for what I'm doing is completely unpersuasive.

I don't know how many people you have downvoted, but eventually you will create an enemy. The risk is low, but some of us will evolve into influential members of the community. What will happen when the resentment is still there? Wars and chaos. How many people have you discuss this particular solution with? Was this something that everyone had agreed upon? You have to understand. This is Steemit. There is no wrong and right answers. Only steem power. You still haven't convinced me how one single fish in the ocean will impact the whole community when there are other people out there posting unoriginal memes and content.

That's a risk many of us are going to have to take to give Steem a chance at sustainable success. Downvotes are a necessary part of the system to counter abuse. There will be some drama as consensus develops regarding what's abuse and what isn't, but I think I've presented well reasoned arguments for why this sort of spamming and upvote buying qualifies. I'm open to discussing counterarguments.

I'm glad you handle this conversation with professionalism. It makes me respect you more. However, I am still on the fence on using the "downvoted" method. In the end, this is for the community to decide. My fear is that things will get out of hand. By using the power of reputation and influence to intimate others, I believe that we are one step closer to a centralized(police) network rather than a decentralize one. People that abuse their power within the Steemit community is not a new concept. We just don't see eye to eye. I support all of my minnows followers and friends, so I apologized if things got heated.

Understood. It's certainly for the community to decide what's rewarded on this network, and that happens through discussions like these and through upvotes and downvotes by all members of the community.

Centralization of power/stake on Steem is another (but clearly related) issue. It is something I'm worried about, but rewarding minnows who create good content is the only actionable solution I'm working on at the moment. The others will take more organized support.

I was having a bad day yesterday and my friend was involved, so I apologized for being so hostile. My point is that while this is spam, it was meant to lend a helping hand to other minnows. You didn't have to down vote. You mentioned once that censorship is as bad as spam. Yet, I failed to see your reason in your action. Two wrongs don't make a right. If you want to set up rules, someone need to set an example. How do you expect everyone to follow your rules when we have different opinions on the matter? How do you expect everyone to follow your rules when those who are in a position of power remain unaffected? What would you do when a whale start spamming? Nothing. It's not like my friend here is making money off of it. I doubt a couple of pennies from a few minnows is going to collapse the whole Steemit economy.

He may not know it or have intended it, but he was going to make money on it. Half of post payouts are given in SP, which he would still keep after paying the voters for their votes. Had each of those voters instead posted a productive comment on someone else's post and then used that same voting power to upvote their comment, they would each receive the same SBD, plus the SP that in these schemes goes to the poster, plus rewards of both types from anyone else who liked their comment and upvoted it.

I'll give @aaalxnovaphobia the benefit of the doubt and assume he was just copying the other people who do this without realizing it scams the minnows too, but it does.

@troglodactyl is correct in identifying the "free SBD" posts as flag worthy. These posts brought no value to the platform and were literally just copy pasted one after another, basically spam. If everyone posted these"free SBD" posts, the value of the STEEM token would crash and burn.

A word to the wise -remember that everything you post on STEEM blockchain is immutable (undeletable) so refrain from name calling if you value your reputation.

How would he be correct? You're just pitting your opinions against ours. There's literally no proof that these posts are harmful. How the hell would this affect the value of STEEM token anyway? We got people here using bots, buying votes, posting unoriginal memes and pornography. Yet, @troglodactyl chose to target @aaalxnovaphobia because we can't fight back. Not everyone post these "free SBD" posts, only a small majority. Also, I hope that last sentence wasn't directed at me. Was that a threat? It's in my right as a Steemit user to express my opinion...or should I automatically bow down to anyone with a higher reputation and influence? The downvoter attack my friend here and you expect me to sit quiet? Do you really think this is a good way to handle the situation? Who makes the rules?

Thanks for the support. In the long run I think we're going to need some protocol changes to keep abuse unprofitable at all SP levels, but we've got to do what we can for now.

When i joined steemit, i was copying contents from the net(from brightside) and received a warning[Plagiarism], so i stopped
i just wanted to share these contents because i found them fascinating and wanted to make others aware of it
Im not a good writer & i dont know how to seek the attention of steemians
I didnt know what to share, how to increase my steem power
Then i came across a post[ Giving FREE SBD ], i found it the easiest and tedious method of acquiring SBD & SP
By sharing the same post everyday[ what you called spam ] im helping not only me but other steemians also to grow in power
Value of Steem token keeps on fluctuating just like btc
My post CAN NOT affect its price!!!

@troglodactyl
i apologize from being rude and incomprehensible.
Nevertheless flagging all my post was not a good way to prove you right, a simple comment would have been sufficient and i would have understand.
i will post something new expecting no more downvote from you and other steemians
If you can please remove the flags

I'm assuming you just missed that comment, and I've removed the downvotes on your posts that are still pending payout. Downvoting is not intended to prove I'm right, it's intended to remove your incentive to continue posts I consider destructive. My reasons for flagging this sort of thing are explained in more detail here (I see you downvoted it, but did you read it first?): https://steemit.com/steem/@troglodactyl/is-steem-a-ponzi-scheme

Thnks for removal of flag and i've also remove the flags on your blog
i missed that comment on https://steemit.com/free/@aaalxnovaphobia/49se3b-free-steem-dollars-sbd-giveaway-21-1-18##@troglodactyl/re-aaalxnovaphobia-49se3b-free-steem-dollars-sbd-giveaway-21-1-18-20180121t230847138z and I sincerely apologize
now i have read your ponzi sheme ;D
I was posting a lot of sbg giveaways in a single day but if i post something like
1)lottery- 2 random winners
2)Prediction of football matches[ i notice u didnt flag it]
3)along with other posts like photography,memes,news,etc...
will that be as you mentioned Destructive because i think its completely different [not ponzi ;D]

The clearest problem to me is the use of the curation system simply to harvest/direct rewards for certain users, rather than to reward any particular activity that might possibly be considered desirable.

The @fairlotto posts you point out serve a purpose beyond just collecting rewards, and any voting on them isn't in direct in exchange for rewards.

Running lotteries or contests based on people actually buying tickets rather than subsidizing the prize pool from voting rewards seems perfectly reasonable to me.

so if i post the concept of lottery same as @fairlotto, will that be considered as plagiarism?

Not by me, though I clearly can't speak for everyone. I'd consider it competition. Try to market it better and/or offer a slimmer house edge, or find some other way to make it more fun than @fairlotto's version.

Here is a free sbd post to flag. https://steemit.com/freesteem/@keks/contests-free-steem-dollars-sbd-giveaway-21-january

If there's no response and they continue then I'll downvote them. Of course you could also just comment on these yourself and help out the community.

I dont have enough steem power to down vote their post, when I do I will.

Thank you all, I've followed you