Sarahah App, The Internet's Current Obsession, Has Everyone Talking

New Delhi: If you're on Snapchat, Twitter or Facebook, chances are your feeds have been flooded with turquoise screenshots from an app called Sarahah. But what is the Sarahah app and why are people suddenly obsessed with it? 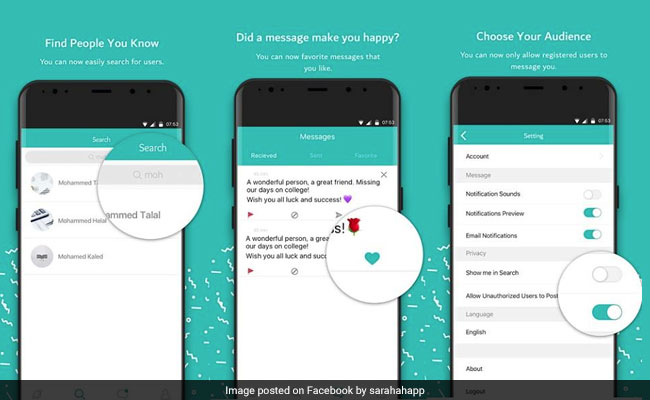 Sarahah, which roughly translates to "honesty" in Arabic, was developed by a Saudi developer, Zain al-Abidin Tawfiq and was initially meant for employees to give constructive feedback to their employers. The app still opens with this message: "Leave a constructive message :)"

Sarahah app lets users send each other anonymous messages, or as its official website puts it, receive "honest feedback from your employees and your friends in a private manner," in an attempt to discover your strengths and self-improve.

Since then, however, the anonymous messaging app has gone massively viral, with people posting screenshots of messages they receive on their social media feeds.

The app, with millions of users, has raised some concerns of cyberbullying due to the anonymity provided.

Congratulations @mlsivaganesh! You have completed some achievement on Steemit and have been rewarded with new badge(s) :