MystiFACT-or-FICTION response #2 Can we make 'Pluto' the 'Planet' again?

Today I will not be talking about health and medicine which i usually do, Today we will discuss some space science stuff.This post actually is a response to MystiFACT-or-FICTION challenge-2

What do you see in the picture above?....
It is a picture of our solar system showing planets orbiting around the red hot sun.
How many planets are orbiting the sun? can you count them?....Mercury, Venus, Earth, Mars, Jupiter, Satrun, Uranus, Neptune & Pluto..this makes 9 planets isn't it?...If you are thinking like this you are wrong....Pluto is no more a planet anymore , it's already been 11 years since pluto was removed from the planet category.

Do you know the answer why it is not considered a planet anymore? Why it was removed from the group of other planets? What exactly is wrong with it?.....Is it possible to put the pluto in planet category again?.....we will try to answer these question in this post.

First of all, lets know a bit of science about the solar system and the planets.
The story is 4.6 billion years old. There was a giant mass of molecular cloud in the space, known as the nebular cloud.It was unstable by itself, there was collision and collapse of the contents of that cloud due to the action of different forces(gravitational, electric, magnetic). Formation of solar system(credits)
During the collapse a dense mass in the centre was formed with a flat disc(protoplanetory disc) around it, the central condensed mass became the sun and the planets developed from the flat protoplanetory disc. The gravtiy of the central mass was so large that the planets began orbiting around it.The moons of the planets formed from the condensation of particles around the planets. solar system not only contains sun, planets and the moons but also contains asteroids and the comets which were formed from the leftovers of the contents that formed planets and moons.

This was in simple about the formation of solar systsem, now lets talk about the characters of the planets, the requirements for a celestial body in a solar system to be called as a planet.We will now discuss why there are only 8 planets in our solar system and why pluto was removed.

Literally planet means wanderer, anything that revolves around the sun, but this is not the definition what International Astronomical Union gave in the 2006, it is as follows-

a planet is a celestial body which:

In a simple way, any celestial body of round shape revolving around the sun in definitive orbit which has cleared its neighbourhood is a planet.

Orbits of different planets(credits)
You may have have understood the first 2 points, but you have problem understanding the third one, is it?....let me explain it..
Every planet has its own orbit, but there are also other masses that travel in that orbit. The point is that for a celestial body to be a planet, it mass should be of the highest % of the total masses that travel in its orbit. For example-the ratio of mass of earth to the sum of mass of other objects in its orbit is 1.7 million, that means the other bodies travelling in the earth's orbit have negligible mass as compared to the earth's, thus Earth is said to have cleared its neighbourhood.

So where does the Pluto falls short in this definition? So, what happens if we put pluto in the planet category again...Isn't it possible?

The answer is not that simple as the question seems. Yes it is possible to name it a planet, but we can not ignore other celestial bodies in the solar system which meet the same criteria as pluto, we should consider them too...
Till now the International Astronomical union has approved Eris, Haumea, Makemake & Ceres as dwarf planets along with Pluto. 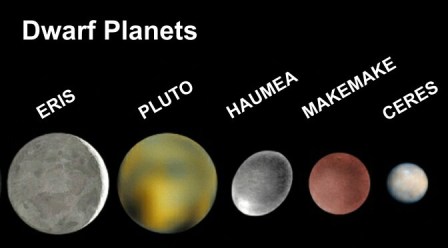 According to Mike Brown, professor of planetory Astronomy, California institute of technology

So, we will have to add 3 hundreds of other celestial bodies to call our pluto to the planet again which is unlikely a possible thing...

Till now that will be the answer.. Thank you for your response to my challenge! Pluto is actually in orbit within a binary system which further reinforces your point that it doesn't "clear" the neighbourhood.

Yeah, that is another supporting point...thank you too..

Great article. I think this is the most concise article about Pluto's status as a dwarf planet. I can see the slippery slope calling Pluto a planet when there are so many objects in the solar system similar in mass to Pluto. Who knows, in the next 20-30 years we may even find an object well beyond Pluto's orbit that has more mass than Pluto. There are several astronomers that suggest there is gravitational influence from a possible planet far in the Kuiper belt. This would be an exciting discovery if this was the case.

Thanks, yes it would have been a bit longer but I have not mentioned many things...

Who knows, in the next 20-30 years we may even find an object well beyond Pluto's orbit that has more mass than Pluto.

It will be exciting to see..

Pluto is a cool name and it is still technically a planet. A dwarf planet but, still a planet.

still not a proper planet.. ;)

Well, not like the other planets, just different. It's not a star or anything else.

I'm not trying to debate, just saying, thats all.

In my opinion, who is to say whats a "proper" planet or not. What are they going to say next? Earth isn't a planet because it's different than the rest?

Well, Im neither trying to debate ....

In my opinion, who is to say whats a "proper" planet or not. What are they going to say next? Earth isn't a planet because it's different than the rest?
it all depends on how we define it...

This post has received a 8.33 % upvote from @buildawhale thanks to: @himal. Send 0.100 or more SBD to @buildawhale with a post link in the memo field to bid on the next vote.

Great article...thanks maybe one days the scientist will find anothers its not imposible cause eris planet is the new planet found isnt??