Great facts you need to know about vitamins and their benefits; dual-functionality of vitamin D... Part 2

Reports have highlighted a variety of vitamin D insufficiency and deficiency diseases.  Despite many publications and scientific meetings reporting advances in vitamin D science, a disturbing realization is growing that the newer scientific and clinical knowledge is not being translated into better human health.

In the previous series. I introduced and explained  vitamin D,  it's  health benefits and deficiencies.  Today, I will be discussing the dual functionality of vitamin D. 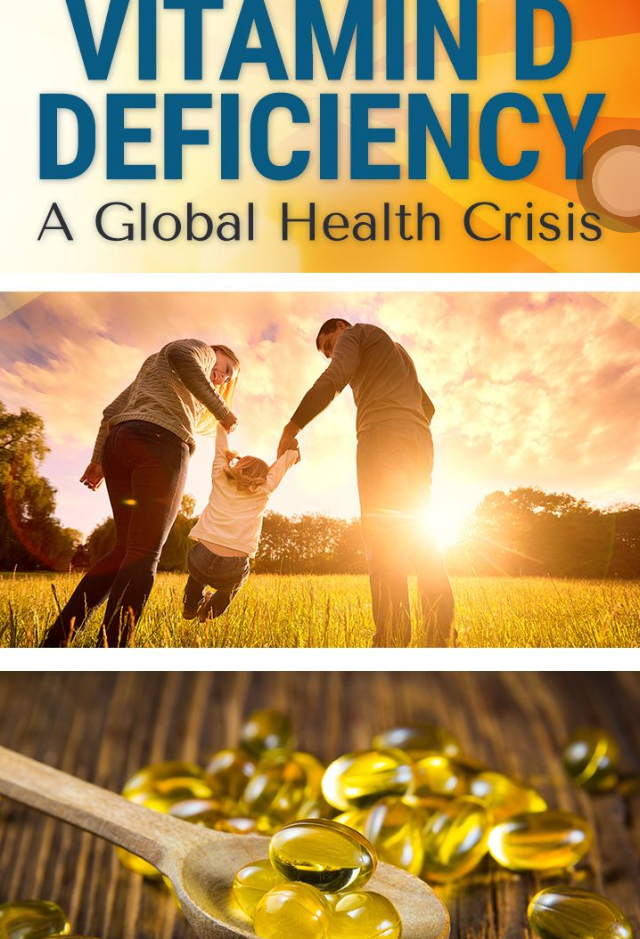 Some believed that vitamin D is actually a hormone rather than a vitamin, this is untrue because vitamin D is dual-functional. It functions as a hormone and as a vitamin.

Here's an illustration to prove this:

When people in the temperate zones are exposed to limited sunlight in winter, would they consider vitamin D as a hormone or vitamin?. Actually, they would consider it as a vitamin rather than a hormone because the recommended daily intake of vitamin D source would be through diet. While in countries, where people are adequately exposed to sunlight with dietary intake of foods of relativlely low vitamin D content , they would consider vitamin D as a hormone rather than a vitamin. As a result of relatively low vitamin D content of many foods, food products and milk are supplemented with vitamin D in many countries. Also, sun exposure is variable in the population and recommendations about the amount of sun exposure that's safe are uncertain in view of the skin cancer . Inorder to avoid controversy, it's best to say that vitamin D is dual-functional. However,  the recommended daily intake of vitamin D is 200IU - 400IU   (international units) which is equivalent to 5 -10 micrograms for children,  adolescents and adults. Only a few foods contain vitamin D. The major natural source of vitamin D is synthesis of cholecalciferol in the skin from 7-dehydrocholesterol through a chemical reaction that's dependent on Sun exposure. 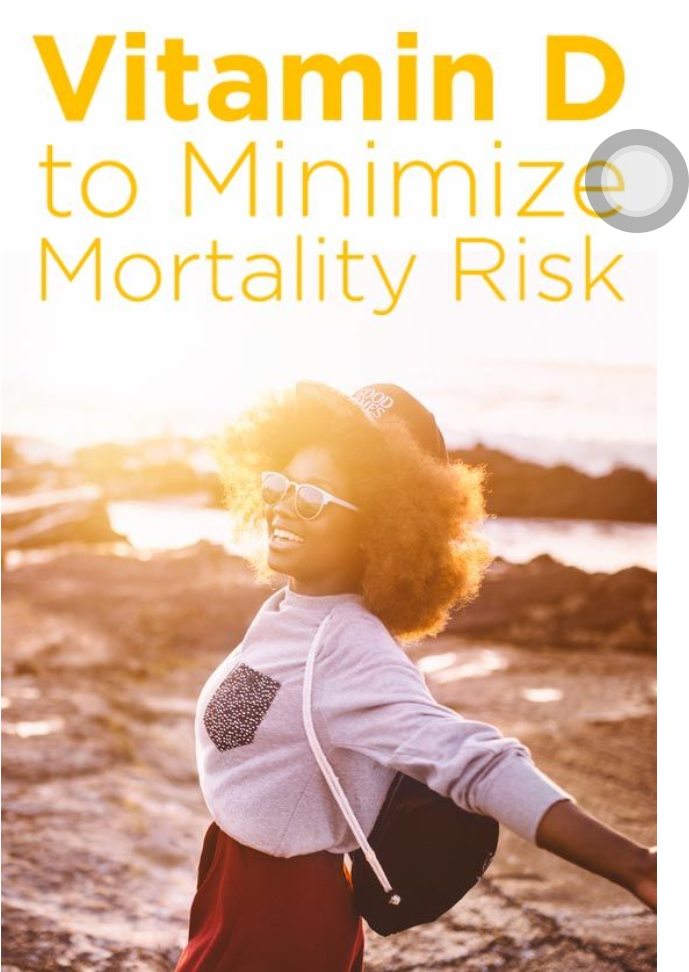 2.   it's produced in the malpighian layer of the epidermis and it exhibit endocrine-mediated response or action .

1.    It s an organic chemical compound which an organism cannot make in sufficient quantities.

2.     It can be supplemented through the diet.

In 1919, Mellanby showed the beneficial effects of cod liver oil in rickets. While, Angus & Co-workers isolated Vitamin D and named it ‘CALCIFEROL’ in 1931. Otto Diels and Klurt Alder,   gave the structure of vitamin D and won Nobel prize in 1950.

Vitamin D is a group of fat-soluble secosteroids having hormone-like function and other multiple biological effects. There are two types of vitamin D; they are D2 (known as ergocalciferol) and D3 (known as cholecalciferol) I made use of chemdraw to draw this

The precursors for cholecalciferol and ergocalciferol are "7-dehydrocholesterol" and ergosterol respectively. These precursors can be regarded as provitamins.

The Structure of vitamin D closely resembles that of cholesterol. As shown in the diagram 2.0 below, there are 27 carbon atoms present. It is made up of 4 rings: A, B,C and D (Cyclopentanoperhydrophenanthrene nucleus).The B ring has a open structure and a hydrocarbon chain attached at C17 position, hydroxyl group (OH) is present at C3 and 4 methyl groups are attached at C13, C18, C25. While, ergocalciferol contains a double bond between C22- C23 and an additional methyl group at C24.

Formation and activation of vitamin D

Note: However, natural diets typically do not contain adequate quantities of vitamin D, and exposure to sunlight or consumption of foodstuffs purposefully supplemented with vitamin D are necessary to prevent deficiencieVitamins D2 and D3 present in the body are not biologically active.They are converted to an active form by two sequential hydroxylation reactions, occurring in liver and kidney respectively. The liver and kidneys convert vitamin D (produced in the skin and taken up in the diet), into the active hormone, which is called "CALCITRIOL". Active vitamin D helps to increase the amount of calcium the gut can absorb from eaten food into the bloodstream and also prevents calcium loss from the kidneys.

Here's the reaction pathway for the production of active vitamin D from 7-dehydrocholesterol. 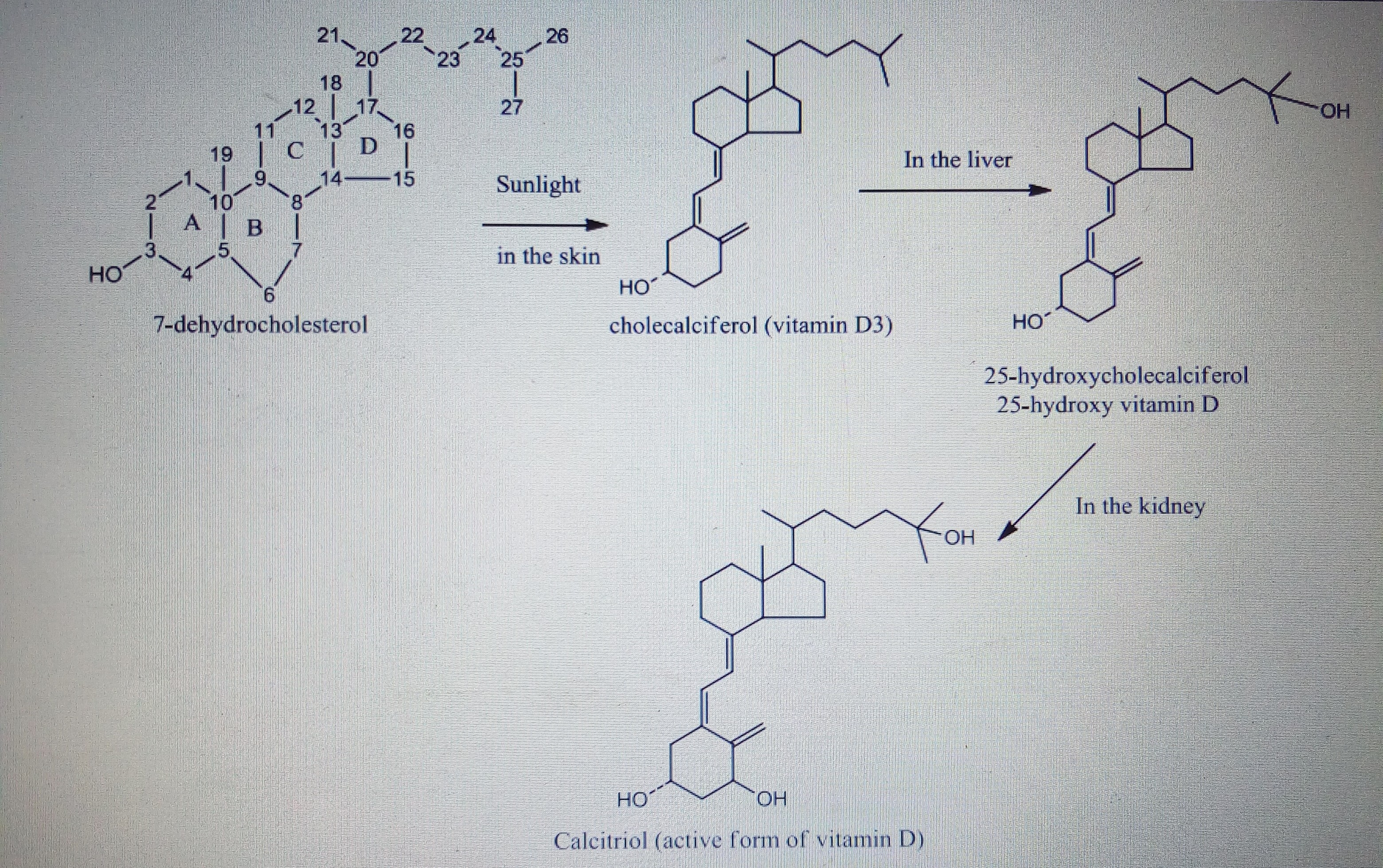 I made use of chemdraw to draw this.

2.    Calcitriol enters the target cell & binds to a cytoplasmic receptor

3.    Calcitriol-receptor complex carries it to the nucleus, where it interacts with DNA.

The health benefits and deficiencies of vitamin D was discussed in the previous series. Click on the link below to view and comment.(https://steemit.com/science/@omotayosteem001/great-facts-you-need-to-know-about-vitamins-and-their-health-benefits-part-1)

You can drop your questions here. I will gladly provide answers.

I had hypercalcemia (elevated blood calcium) and a weakened immune system due to Vitamin D deficiency. However, my Vitamin D level was not low enough to be flagged using the standard reference range. Additional Vitamin D supplementation cured these. The lower end of the reference range definitely needs to be raised.

If that's the case, age range determines whether additional vitamin D supplement would be needed as opposed the reference range.

The British Medical Journal's Thorax journal had an editorial in 2015 recommending that the lower range be increased by 10 points. The British are also considering fortifying food with Vitamin D.

Thanks to @rufusfirefly
We have planted already 4759.69 trees
out of 1,000,000
Let's save and restore Abongphen Highland Forest
in Cameroonian village Kedjom-Keku!
Plant trees with @treeplanter and get paid for it!
My Steem Power = 18680.24
Thanks a lot!
@martin.mikes coordinator of @kedjom-keku